On May 12, 2017, Professor Stephen Geiger graduated at UW-Madison with a Ph.D. in Classical and Ancient Near Eastern Studies. He wrote a dissertation on “The Conquered Conquers: The Art of Exile in Josephus.”

Josephus was a general in the Jewish War against the Romans that ultimately resulted in the destruction of Jerusalem in A.D. 70.  After that conflict, he wrote about that war and presenting a history of the Jewish people from the creation of the world.  Geiger chose to study Josephus because “much of our understanding of the history and culture of Bible times comes from Josephus,” he says. “We learn much about the Pharisees and Sadducees and the Essenes from Josephus. Josephus mentions John the Baptist.  Josephus tells us about Pontius Pilate, about Herod Agrippa and his wife Herodias.  Josephus speaks of the close relationship that the Herodian family had with emperors in Rome.”

Geiger received a Masters in Classics from UW–Madison in May 2007.  He began the Ph.D. program in September 2010, and took one semester off to teach in Hong Kong. A father of six, Geiger says, “I thank the Lord for the people he has given. Particularly during the coursework portion of my program, fellow members of the faculty taught more so that I could be free to study in Madison. Then, throughout the program but especially in the last six months of writing the dissertation, my dear wife Anna made it possible for me to spend time completing the project.”

Now that he has completed the degree, he has another project to complete, “About seven years ago I bought a bunch of wood for a playhouse.  The wood has been sitting in our garage since then. But no more!  By the end of this summer, Lord-willing, our Geiger crew will be able to enjoy their new little place.” 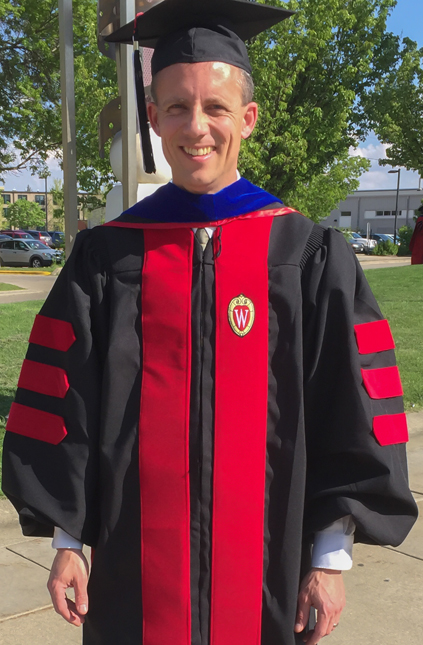