A Case for Character

A Case for Character: Towards a Lutheran Virtue Ethics 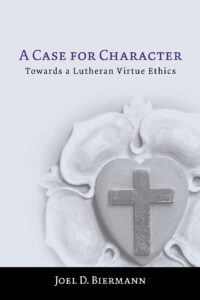 In his introduction Biermann paints the picture of a pastor who, feeling compelled by the absolute rule of letting the gospel predominate in his preaching, “transforms the ethical directions” of his text “into withering convictions of human sinfulness resolved in the gospel of grace” (1). Biermann, an LCMS seminary professor, assumes this hypothetical preacher represents a large number of Lutheran pastors, and also their hearers who expect as much every week. And so it is both awkward and also painfully obvious when he points it out: The purpose of the biblical text was the formation of Christian living (which is how Biermann defines Christian ethics, 7)—it had nothing to do with the realization of sin or of justification through faith in Christ by grace.

Biermann anticipates protests of legalism, pietism, or even works-righteousness, and so he emphatically and repeatedly states in his book that the problem is not the gospel itself. The problem is misplacing the gospel (3).

The other main problem with such preaching is that it reduces the law to just one of its several uses—that of mirror. The divine law is juxtaposed with Pharisaic legalism. Rather than the law working in tandem with the gospel, the law is seen as an enemy to be defeated by the gospel week after week, day after day. The preacher thinks he must liberate his hearers from the law with gospel freedom each week. The result is that parishioners who hear that something about their current state is in conflict with the Biblical text—or at the very least has room for improvement—are “restored by the preaching to the status-quo position” (2).

This unbiblical approach of reducing genuine Lutheran theology to an oversimplistic construct leads many Lutherans to either reject the need for ethics outright or to not know what to do about ethics at all. In other words, sanctification-focused preaching and activity have no home in many Lutheran congregations. In Biermann’s view, this is also the result, in part, of a reliance on society in general to teach and enforce ethical values. Biermann’s laudable purpose is to offer a legitimate theological understanding and attitude that would allow and assist pastors to be able to speak of ethics and character formation (8-9).

Biermann deepens his reader’s understanding of the issues by presenting the ideas and often valid critiques of the Methodist Stanley Hauerwas, who uses the Lutheran Gilbert Meilaender as his theological foil (or straw man?). Biermann in turn responds to Hauerwas and utilizes him as the primary voice of opposition to the Lutheran position and application of ethics. By examining the Lutheran Confessions as well as other writings of the reformers, Biermann convincingly proves that good Lutheran theology has no problem with ethics—they really do embrace and promote it—but rather “good Lutherans” have a problem with such theology.

Biermann’s proposed solution is found in the sixteenth-century Lutheran reformers’ use of three kinds of righteousness. One kind of righteousness is vertical, between God and man. Two of the kinds are horizontal. One of these horizontal kinds is connected to the vertical relationship. The other is cut off, but is still within the realm of God’s created design and purpose for the world and all people. While there are benefits to this latter “civic” righteousness, it is disconnected from the graceful and justification-enabled horizontal righteousness.

This visual depiction (149) of such kinds of righteousness made me consider how the church throughout the centuries has often tied itself to upholding the bottom-line righteousness (Sabbath laws, prohibition of playing cards, dancing, going to theatre, etc.) and has found itself pulled into legalism. As societal morals have seriously decayed and eroded in the past hundred years, churches that have not cut ties with civic righteousness have found themselves pulled under into anomianism (which is not any better than antinomianism).

Is it too simple to say that Biermann’s work is none other than to review and restore the value and necessity of the genuine proper distinction of law (with all its uses) and gospel, of the Christian’s need for both justification and sanctification, and of God’s work of grace upon both a person’s eternal status and current state? Even if this were all there was to this book in its practical terms, there is a need for it in some places.

Biermann’s work is primarily a reaction to a widespread observation of the contemporary Lutheran view and practice of virtue ethics, particularly but not limited to what is seen in the LCMS. As an outsider, I can only assume that the perception reflects some reality. From my WELS perspective, this is a valuable contribution to the understanding and practice of true Lutheran law-gospel preaching, teaching, and practice. At Wisconsin Lutheran Seminary we were cautioned against a certain kind of law-gospel reductionism, where the law only served as a mirror to set up the delivery of the gospel. However, in hindsight from my personal experience, this lesson and warning could be repeated or learned more.

I believe the practical problem of this book is clearly presented and soundly supported.  The historical and theological breathing room provided by this work, especially within the “three kinds of righteousness,” offers us a “safe” and clear way to both divorce ourselves from depending on the civic righteousness of the world to provide our moral backbone, as well as giving us the foundation to build up a thoroughly Christian virtue ethics. However, the brief application section at the end left me wanting more. Perhaps I’ve been too accustomed to ministry resources reading more as “self-help” and “how to” manuals.

While the introduction of the book hooked me with a real-life preaching scenario and dilemma felt by me (and no doubt by others), I wished there could have been a narrative-like conclusion to the book where the pastor preaches an ethical sermon to a (thoroughly catechized?) audience open to and desiring of his very biblical and very Lutheran message. I suppose we are meant to construct our own conclusions in reality.