A Complete Handbook of Literary Forms in the Bible

A Complete Handbook of Literary Forms in the Bible 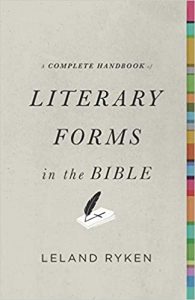 Leland Ryken is a professor of English emeritus at Wheaton College in Wheaton, Illinois.  He has contributed several works to the study of biblical and Christian literature.  Ryken was the literary stylist for the English Standard Version (ESV).

Ryken intends this book to meet two main needs.  In the first place, he states that “it defines and illustrates terms we regularly encounter as we read commentary on the Bible or hear it expounded” (9).  Secondly, Ryken hopes Bible students will be able to pinpoint literary forms in a biblical text, identify the function those literary forms serve, and in this way develop a greater understanding of and appreciation for God’s message to us (9).

These stated intentions help us to understand the value of studying biblical literary forms. It is important to recognize that the essence of the Scriptures is found in its meaning – what God desires to communicate to us.  However, literary forms pertain to how a biblical passage expresses its content.  While the how of the Bible’s message is distinct from the what of the Bible’s message, observing the how can give deeper insight into the what of God’s revelation.  Simply put, God does have reasons behind the ways he chooses to speak to us in his Word.  He intentionally uses prose here and poetry there.  He has reasons for expressing himself in metaphors or for weaving a motif throughout the entirety of the Scriptures.

Ryken states, “Without the form, no content exists.  Form is meaning.  Meaning is embodied in form.  It is an illusion to think that the Bible possesses a content apart from its forms…The literary forms of the Bible deserve an attention that is commensurate with their inspiration by God” (16). While this comment may be slightly overstated (and it is probably a revealing window into Ryken’s embrace of formal correspondence translation theory), there is much to be embraced in this statement, especially Ryken’s obviously high view of the Holy Scriptures.  Understanding the function of literary forms helps us contemplate in a greater way what God wants us to know for faith and life.

This book is a true handbook as an alphabetical listing of the literary forms found through the Scriptures.  Here are some interesting observations and reactions based on various entries in this handbook:

Ryken states that the subject of literature is human experience rendered concretely (114). This is an important observation since much of the Bible’s instruction is given to us through literature.  So much in Scripture is communicated concretely, not abstractly.  For example, the Fifth Commandment is a clear, abstract statement about the will of our God regarding human life and the wanton taking of that life.  However, the story of Cain murdering Abel in Genesis 4 provides an important commentary on the Fifth Commandment.  It demonstrates in concrete terms how murderous thoughts creep into our hearts and how deeply the carnage of sin resonates in our lives.

On parables he writes, “The parables are obviously allegorical texts.  We should immediately make a contrast between interpreting an allegorical text and allegorizing a text.  The latter procedure involves foisting allegorical meanings on a text that was not intended to be interpreted allegorically.  This is an unnatural thing to do with language and discourse.  The parables of Jesus are allegorical in the sense that numerous details in most of his parables stand for something else (137).

The entry on parables also reminds readers that there is an art to interpreting parables: “There is, to be sure, an allegorical continuum on which we can place individual parables: in some parables, nearly all of the details have an allegorical or ‘other’ meaning; in others, fewer details are allegorical; and at the far end of the continuum, only a few details have a second level of meaning” (137).

Ryken’s comments about chiasm caught this reviewer’s attention, since a number of recent conservative Lutheran biblical commentaries seem to do exactly what Ryken opposes: “The incidence of chiastic structure in long passages has been greatly exaggerated in recent biblical scholarship; most of the alleged instances are the product of ingenuity of the scholar in phrasing matters in such a way as to produce a chiastic structure.  The resulting diagrams and charts are often totally confusing to the general reader of the Bible” (42).

In his entry on the motif known as the Lost-And-Found Story, Ryken makes this observation: “The metanarrative (‘big story’) of the bible is a story of lost and found.  When Adam and Eve disobeyed God’s edict and fell into a state of sin, the entire human race was lost.  Theologically, we speak of the ‘lost state.’  Through the atonement of Christ, believers find salvation and regain what was lost, having been found by God” (116).

Ryken’s exploration of the various sorts of type scenes which we encounter in the Scriptures was helpful.  Ryken defines a type scene as “a set of ingredients that converge to form a story pattern” (203).  Recognizing such type scenes in the Scriptures, pinpointing their components, and understanding how those components typically impact human will and emotions can pay big dividends for the preacher who desires to preach with textual flavor.  An interesting entry in the type scene category is that of the betrayal story.  “The genre of betrayal story evokes strong feelings for at least three reasons.  First, all human relationships depend on trust, and when one person unilaterally decides to break that trust, something deep within us feels violated and is moved to protest.  Second, for that very reason there is an instinctual feeling of revulsion against the traitor.  Third, the sudden downfall of the helpless victim of betrayal awakens our sense of pathos.  More than most story types, the betrayal story leads us to feel vulnerable, based on an awareness that what happened to the victim in the story could easily happen to us” (33).  The preacher preaching on the story of Joseph and his brothers, for example, will benefit from having an active awareness of the effects a betrayal story has upon its hearers.

The layout of this handbook has strengths and weaknesses.   It is a truly comprehensive resource valuable for seminary and pastoral Bible students.  Readers of this review would certainly encounter valuable categories of biblical type scenes and stylistic traits of which they had never heard.  One of the most valuable features of the book are the biblical examples cited in each entry to illustrate the literary form under discussion.  Readers can observe the literary form in action, so to speak.  This reviewer found himself making many notes in his Bible when such examples were provided.

However, the handbook format, while fitting and perhaps necessary for the subject at hand, has weaknesses.  For example, the beginning student of literary forms in the Bible wouldn’t know where to start a search in this handbook to find a description of the literary form he is encountering as he studies a portion of Scripture.  To state it in a different way, this handbook cannot be referenced in the same way readers would use an encyclopedia or dictionary.  As Ryken himself states, “It is a fact of life that we cannot use something that we do not know exists” (9). The best way to overcome this weakness is simply to thoroughly digest the contents of this book, although an index of the biblical references cited would also help.  Furthermore, the encyclopedic nature of the entries makes it difficult to sit down and digest large portions of the book in one sitting.  Nevertheless, for the Bible student looking for a greater understanding of how and why God communicates to us as he does, this handbook will be a valuable and welcomed resource.