And Take They Our Life

And Take They Our Life: Martin Luther's Theology of Martyrdom 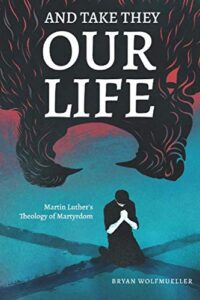 “What are we supposed to do if the government grows more hostile against Christianity? What do we do if they come to our houses to take away our Bibles? We need to do a Bible Study on that, Pastor.” I smiled at my member and I said, “We can do that Bible Study, Jim. But you might not like the answer. The answer might be, ‘Suffer!’” Jim gave me one of the most serious looks I’ve ever seen and he replied, “If that’s the answer, so be it. But we need to know.” Thank you, Lord, for members like Jim.

Suffering and crosses are necessary in the life of every Christian. This is a good reminder for anyone who would follow Christ. It is an especially good reminder for those of us who have lived all our lives virtually free from persecution in a culture that seeks to minimize suffering and maximize comfort and pleasure. Those who are acquainted with the works of Pastor Bryan Wolfmueller (LCMS) know that the topic of suffering is one that he addresses often. In his self-published essay And Take They Our Life, Wolfmueller examines suffering and martyrdom through the lens of Martin Luther’s writings.

I found And Take They Our Life to be both thought-provoking and encouraging. At a modest ninety-six pages, the book is light and easy to finish. And you really can’t beat the price tag. (Wolfmueller offers the book for free in PDF-form on his website.) Since the subject of the book is Luther’s view of martyrdom, there is a heavy saturation of lengthy Luther quotations, which are always a joy to digest. I guess what I’m trying to say is that there’s really no reason not to read this book.

Wolfmueller divides the essay into three parts. First, he examines Luther’s pastoral reaction to the burning of Brother Henry. For those who are not so up-to-snuff on their Reformation history (I didn’t know the story until I read this book), Brother Henry was a Dutch friar who was active in spreading the doctrine of the Reformation in northern Germany. For this he died a slow and painful death at the hands of an angry mob.

Henry was a friend of Luther’s. He studied under Luther in Wittenberg. So Luther took it upon himself to write a letter to Henry’s congregation in Bremen. In his letter, Luther stressed the truth that Henry’s martyrdom was not proof of God’s absence, but instead, of God’s presence:

For not only do we have, hear, and read the pure Word of God and see it rise like the very sun in its brightness, but we also sense the presence of the Spirit of God and experience how He demonstrates and confirms His Word with great and mighty deeds, as has been His custom from the beginning. Above all, He has given us brave and bold hearts, so that in many places both preachers and hearers are daily being added to the number of the saints. Some have shed their blood, others have suffered imprisonment, others again have been driven from their homes, but all of them endure the shame of the cross of Christ [Heb. 12:2]. In our day the pattern of the true Christian life has reappeared, terrible in the world’s eyes, since it means suffering and persecution, but precious and priceless in God’s sight. As the Psalter puts it [Ps. 116:15], “Precious in the sight of the Lord is the death of His saints,” and again in Ps. 72[:14], “Precious is their blood in His sight.” (15)

On the basis of this and several other quotations, Wolfmueller develops the idea that persecution and martyrdom should be considered neither strange nor surprising. The Lord of the church has told us to expect these things. He has also promised to work through these things for the good of his people. No matter how much the devil tries to convince us to despise the crosses that God sends us, we receive them gladly because it is God who sends them.

In part two, Wolfmueller further explores the gladness that God’s people have in the midst of suffering and martyrdom. He tells the stories of Agnes and Agatha. These two young women were both desired for their beauty, but both chose devotion to the Lord instead of the men who sought them. As a result, both women suffered and died shameful deaths.

Such incidents through the eyes of the world are nothing short of tragic. But in his writings, Luther holds a different view:

Thus we read about the holy martyrs who defied tyrants, or about the suffering and tortures of the young virgins Agnes and Agatha, who were so cheerful and happy on their way to prison and death that they imagined with pride that they were going to their wedding. Indeed, dear daughter, if you can face imprisonment and beheading as though you were going to a dance, then your heart, mind, and courage must surely be different from the world’s. You can disdain life and limb, nobility and friendship, and all the possessions on which the world places its reliance. Such courage must be the work of none other than the Holy Spirit. (42-43)

Again, with several other Luther quotations, Wolfmueller explains that what the world intends for our harm and defeat, God uses for our glory and victory. In the end, suffering and martyrdom can only lead to an eternity of joy and peace. Because this is true, God invites us to live in joy and peace already today—even as we suffer persecution and death.

In part three, Wolfmueller shifts gears a little bit to give specific encouragement to pastors:

It has been said, “You can learn everything you need to know about a person when you know who their hero is.” Our heroes stand before our minds and imaginations as pictures of lives well-lived. Knowingly or unknowingly we act, talk, and think like our heroes, or at least we try. Part of our Christian life is being aware of our heroes, and part of pastoral care is cultivating the right heroes for the congregation. This is especially important in our modern context. (64)

Wolfmueller uses this section to stress the importance of pastors encouraging their members in the midst of suffering and persecution. He suggests that pastors do well to point their people to the examples of the martyrs. In the martyrs we find men and women who were afraid, as we are afraid, but they were given strength to persevere by the Holy Spirit. In the martyrs we find brothers and sisters who firmly believed that the glory and joy of the life to come would far outweigh the suffering and shame of today. Christians are blessed when their pastors remind them that this always has been and always will be true for as long as “today” lasts.

I was a little bit disappointed to find that this section is the shortest of the book. There are not as many Luther quotations. I would have appreciated the same thorough elaboration of thought that I found in the other sections of the essay. But I suppose if my biggest critique is, “I wanted more,” that in itself indicates that what I did read was a blessing.

Wolfmueller closes his book with an appendix that is simply twenty-five pages of miscellaneous Luther quotations that have to do with suffering and martyrdom. For any Christian who has ever thought, “I wonder what Luther says about suffering,” this collection will be a blessing in and of itself.

The apostle Peter encourages suffering Christians to stand firm, “because you know the family of believers throughout the world is undergoing the same kind of sufferings” (1 Peter 5:9). I don’t think Pastor Wolfmueller’s essay is going to revolutionize that way the church views suffering and martyrdom. But I also don’t think the church’s view of suffering and martyrdom needs to be revolutionized. Rather, we are blessed when we are reminded that suffering and martyrdom are the pattern of the Christian life. We are blessed when we are encouraged in the truth that God is with his suffering church, just as he always has been. With his essay, Wolfmueller gives us a valuable link to Luther who, in turn, gives us a link to triumphant martyrs both in the ancient church and in the Reformation era.

I would recommend this book to any Christian who is nervous in the face of persecution, to any pastor who would like to better serve such Christians, and to anyone who just likes reading Luther.

PreviousHelp Us Reach Our Goal!
Next Psalm 112