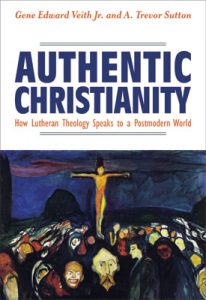 Gene Veith, Ph.D., is the author of 20 books on topics involving Christianity and culture, classical education, literature, and the arts. Veith took a long road to Lutheranism and has written extensively on Christianity and Postmodernism. A. Trevor Sutton, a life-long Lutheran and graduate of Concordia Seminary, St. Louis, has served five years as a parish pastor and brings his observation that Lutheran theology uniquely meets the need that postmodern (and especially millennial) individuals have for answers to life’s biggest questions. Thus, as they note, “This book is a collaboration between an aging academic and a young pastor” (9).

As one might expect from the title, “The thesis of this book is that Lutheran Christianity is particularly equipped to address the postmodern condition” (12). The authors set the stage for their premise with a helpful review of premodern, modern, and postmodern ideologies. The book then goes on to show how Lutheran theology, and not the various tactics of the church growth movement or the emergent church movement, can speak to people no matter where they stand in today’s multi-faceted philosophical milieu. The authors focus especially on “the nearness of God, the justifying peace of the cross, the mysterious hiddenness and presence of God in the Sacraments, and the divine purpose found in vocation” (231).

Chapters 2-5 deal with the matters of God’s hiddenness, nearness, and peace, issues with which many today seem to struggle. The authors argue that while our society tries to do without God in various ways, most people still believe in God. A 2016 Gallup poll indicated that 89 percent of Americans believe in God. However the authors explain, “Their conception of God tends to be confused, simplistic, and quite different from what is disclosed in the Bible. They have difficulty conceiving of a God who is connected with the world” (61). They point to the Lutheran teachings of the incarnation of Jesus and the sacramental presence of Christ in Holy Communion as answers to those who feel God is distant and not physically present in this world.

The authors extend the discussion on the incarnation to help answer the postmodern questions of how people can justify themselves and how they are to understand suffering. Instead of justifying yourself, which is an unending task, authentic Christianity (aka Lutheranism) points out the work of God in justifying us apart from our work. And, “How did Christ justify us? By dying” (88). This is the transition into answering the objections to God or Christianity on the basis of suffering in the world. The authors maintain that through the great exchange at the cross God addresses our suffering. They write, “‘How can a righteous God allow so much evil in the world?’ He neither allows it nor does nothing about it. Rather, He takes it into Himself”(119).

In chapters 6-8 the authors take up the doctrine of vocation. They argue that the questions people have today about life’s purpose, the intersection of church and state, and the role of works in Christianity all revolve around the doctrine of vocation. They state, “In our vocations, we work side by side with God, as it were, taking part in His ceaseless creative activity and laboring with Him as He providentially cares for His creation” (157-158). This section of the book is rife with examples of vocation, but it includes food for thought for those of us called to serve in the ministry. The authors write, “Some Christians are preoccupied with ‘the Lord’s work’ while letting their marriages fall apart, ignoring the needs of their children, and otherwise sinning against the actual responsibilities to which God has called them. The doctrine of vocation makes it clear that living the Christian life is not limited to things that happen within the church walls” (163).

The authors conclude their book with a call to return to the basics of authentic Christian (Lutheran) teaching. They argue that, “Recovering authentic Christian spirituality does not require producing a new message. Nor does it mean joining the cacophony of our culture. Instead recovering authentic Christianity requires increasing the clarity and power of the signal so it can be heard over the background noise” (220). Within the Lutheran church the authors call on this to happen by joining in a shared Confessional faith and making use of the Divine Service, which they argue, “creates the awe, mystery, and beauty of holiness” (229), as opposed to the ever changing styles of culture which some in the church seek to copy or transform with little effect. They state, “Instead of endlessly tinkering with style, the years ahead will require Christians to deal with the content of its teachings” (231).

By proclaiming the truth of God’s Word, especially when it comes to Christ’s incarnation, and teaching the sacramental and vocational life, the authors hope that a new Reformation in our culture can begin with the same Lutheran tenets that brought about the first Reformation.

I found this book to be a solid presentation of the core truths of our Lutheran theology, presented in a refreshing way that will help us consider how we interact with our cultures as Lutherans. I have often found not just prospects, but current church members, wrestling with the questions addressed in this book. The chapter dealing with the problem of suffering and God’s answer in the death of his Son is full of insights that may be of service as you guide people to see God’s answer for evil in this world. I appreciated, too, the reminder that the theology of the cross will always resonate with people, no matter what philosophical tenets they claim, because there will always be suffering as a real, physical, objective reality no matter how much we try to avoid or deny it.

Perhaps the best part of this book was the section dealing with vocation. Chapters 6-8 all dealt with this issue, although chapter 7 was not as helpful in its discussion of vocation within the two kingdoms. The emphasis on vocation is one that is biblical, but only found with its full implications in Lutheran theology. Chapters 6 and 8 of this book provided wonderful material for those who want to teach vocation. There were numerous examples of how vocation ties into God’s providence, our purpose in this life, and our ongoing sanctification.

The final conclusions regarding the importance of adhering to the Divine Service (aka the liturgy) were not completely unexpected, but they were not set up as well as they could have been throughout the book. There was not much in the way of explanation regarding variety within the Divine Service either, though it was briefly mentioned. There are of course other books dedicated to such a discussion, but I expected a bit more from this book since it concluded with this topic.

Overall, I thought the authors did a good job of making their points and answering the questions they set out to answer. This book has 9 chapters, each with a short set of discussion questions at the end, which would make for a good course of study for faculty or circuit meetings. While this book could certainly be useful to study with laity, I would say that it is not written with the average lay person in mind. It is written for those who have studied theology and philosophy. If a pastor wanted to use this for an adult book study some education ahead of time and explanation along the way would likely be needed.

If you read this book, which I would very much recommend, you may not find any earth shattering revelations. But what I think you will find is a refreshing look at the central teachings of our Lutheran heritage. And I suspect you will appreciate the insights these men offer into bringing our Lutheran theology, authentic Christianity, into the conversation with the modern and postmodern people we meet every day.