Believer's Baptism: Sign of the New Covenant in Christ 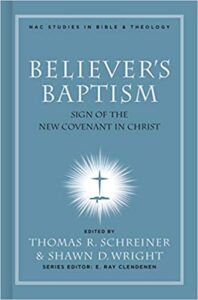 Believer’s Baptism: Sign of the New Covenant in Christ is a 2006 work and part of the New American Commentary Studies in Bible and Theology. This particular book deals exclusively with the topic of baptism in hopes of proclaiming “the whole counsel of God accurately for the church of Jesus Christ and for living in a way that pleases God” (preface). It is an admirable goal. If only it met its aim of accuracy. Then again, the subtitle tells us it was doomed to fail from the start. And yet, there are enough quotes from these Baptist scholars which entice Lutheran pastors and theologians to keep turning the pages.

Believer’s Baptism seeks to defend credobaptism (the baptizing of only those who believe in Christ already and show it by intelligent, obedient, and willing acts of repentance and discipleship). The doctrine of paedobaptism (baptizing infants) is always in the periphery. The book is not primarily trying to engage with Catholics or Lutherans but rather trying to respond to the “evangelical paedobaptists, primarily in the Reformed tradition, who baptize infants not because they believe that baptism regenerates the child but because they believe that baptism brings the child into the covenant community where he or she will have the blessing of hearing the gospel preached as they grow up as members of the church” (6-7).

The book is a compilation of ten essays by ten different authors. The essays are ordered in a sort of chronological timeline, from the public ministry of our Lord to the modern church. I consider none of the essays to be throw-aways. Each of them intrigued me.

The first three essays cover baptism in the Gospels, in Luke and Acts, and in the Epistles, respectively. While the authors clearly hold to the inerrancy of Scripture and are very concerned about relaying what they interpret our triune God to be saying, it is frustrating to see the relatively little attention that was given to key baptismal sections like John 3, Acts 2:39, Romans 3, and Titus 3. Instead, they came to the predictable conclusion that “there is no warrant … for the notion of baptismal regeneration” (34), a conclusion that seems to be based less on sound Greek exegesis and more on the preconceived bias that infants cannot exhibit faith in the intelligent way which the Bible calls on us to exercise our faith.

The fourth essay compares different views on the old and new covenants which are held among the Reformed. As such, it felt like a dinner party where Reformed cousins are evangelically arguing, and as the argument drags on, the Lutheran reader is awkwardly in the middle saying to himself, “While each may make some decent points, neither is completely right.”

While the fifth essay provides a neat look at various church fathers’ writings, it seems the author may have been cherry-picking the patristic writings which bolstered his argument. For instance, he never mentions the “one baptism” of the Nicene Creed. In a strange tension, the essay both champions Tertullian for warning against infant baptism while acknowledging Tertullian’s weaknesses on original sin which led him to his low view of infant baptism.

The sixth essay provides a helpful overview of the theology of Anabaptists like Balthasar Hubmaier and Ulrich Zwingli who rejected infant baptism, while the seventh essay offers a thorough and lengthy examination of the doctrine of Reformed men who accepted infant baptism, in particular, John Calvin and an intriguing man named Pierre Marcel. The author contends that Calvin and Marcel relied too much on the Old Testament to formulate their baptism doctrine, which led to inconsistencies. These two essays were helpful in the historical information they gave, and I appreciated being introduced to Marcel and a number of decent statements he made.

The eighth essay evaluates the work of Meredith Kline, who posited that Old Testament language is similar to Suzerain vassal treaties of the Ancient Near East and then asserted that “baptism corresponds to circumcision as the oath-sign of allegiance to our suzerain,” namely, God (269). This essay could have been more succinct. Despite some isagogical benefits to be gleaned from the summary this essay provides of Kline’s work, I agree with the essayist’s evaluation that Kline’s proof for paedobaptism is shaky.

The ninth essay centers on Alexander Campbell, a leader in the Restoration movement in the 1800s. Shedding light on a rift and misunderstanding within evangelical circles, the essay documents how the “zeal to avoid ‘baptismal regeneration’… spawned another error, ‘decisional regeneration’. This was an error rooted in revivalism that is now a traditional element in American evangelicalism” (325).

The tenth and final essay deals answers the practical questions of how believer’s baptism should be done within the context of local churches. The answers are less than stellar. While many of the other essays used scriptural language in ways similar to the way Confessional Lutherans do and in ways that at times left me unsure what they fully meant by it, the more straightforward language of this last essay helps to clear up the word games and show in no uncertain terms what the previous nine essays were getting at. If you read this book, perhaps you should start with this last essay before working through the others.

This is not some Baptist version of The People’s Bible Teaching Series. It does not aim to be accessible to the lay person. It wants to converse with those who are able to work with the original Greek, who are comfortable with the concept of doctrinal systematics, and who understand the history of the church from our Savior’s ascension till now. I would recommend this book to any brother in ministry because it stretches the reader in all four branches of our seminary training. As one essayist said, “The baptismal question is a major test-case for one’s entire theological system since it tells much about how one puts the entire canon together” (160).

I would especially recommend this book to brothers who are navigating ministry in the Bible Belt or within the shadow of a dominant Baptist or evangelical presence. On the one hand, this book may help such a pastor to avoid caricaturing Reformed theology, because it will show that, even though not entirely orthodox on this point, some of them do have a higher view of baptism than perhaps we give them credit for. Even more so, this book will help those pastors refute heterodox teachers in their area, shepherd members who may feel pulled to those churches, and shine a light on the full comfort of our baptismal theology.

Your reading will probably make you want to pick up and meditate on the catechism for your own devotional life. And that’s not a bad thing either.

PreviousImportant Deadline Information for Celebration of Ministry 2022
Next Psalm 85