Biblical Words and Their Meaning

Biblical Words and Their Meaning: An Introduction to Lexical Semantics 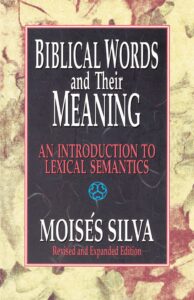 How much ought an exegete explore or rely on word studies? How influential is context on the possible, multiple senses of a word? When might a pastor declare that he has arrived at what a word means? Though certainly not claiming to have expounded on these questions comprehensively, Moisés Silva presents a solid introduction to the world of lexical semantics in Biblical Words and Their Meaning, wading into the waters of those finer points of how words operate on their own terms as historically-bound, culturally-specific components of language. Drawing from a rich source of linguistic expertise, Silva’s work steers the reader through weighty concepts of language development and semantic change with clarity and perspective.

Silva’s introduction alone is worth revisiting periodically throughout a pastor’s career of Bible study, as it addresses hermeneutics and exegesis. Leaning on the 1961 pillar work of James Barr, The Semantics of Biblical Language, the author indicates early on that consensus on the study of Biblical words often gives way to various periods of criticism of its fundamental tenets. This developing conversation owes, in Silva’s mind, a great deal to Barr’s contribution in Semantics. As an example, consider The Theological Dictionary of the New Testament. Many (including this reviewer) enjoy having this collection on their shelves since it provides a helpful and insightful look into the function of Greek words in multiple contexts. However, without discounting TDNT’s inherent utility, Silva exposes through Barr’s work that by the very organization of TDNT we encounter a creative, some might say crude, definition of what a dictionary is and what it does, as it confuses the history of Greek words with the history of Greek ideas.

After such a powerful introduction, Silva is consistent in building momentum toward giving practical insight throughout the book. The book has two parts: Historical Semantics and Descriptive Semantics. These terms are interchangeable with what linguists call diachrony and synchrony. The utility of these terms and the ideas they encompass cannot be overstated. Diachrony considers the development of a word’s usage over time. Synchrony is that static interpretation of a word as it is used at a particular time. Silva organizes his book according to these areas of study, with synchrony clearly predominating.

If questioning and examining the formatting of TDNT sounds ambitious, one ought to respect Silva’s approach to the study of etymologies in Part 1. As has been mentioned by a number of instructors in our circles, etymology can prove very misleading for exegetical purposes. With careful use of scholarship, Silva handles the topic thoroughly and delicately, presenting the case that etymology should not be allowed to overpower exegesis as if a word’s history is its true meaning, yet etymology can at times serve exegesis when there is reason to believe that a writer was himself conscious of a word’s etymology as he was using it. A good example of this is the New Testament Greek use of ἐκκλησία. Rather than assume this term always points to a group of people somehow “called out” from somewhere, or conversely always going with the newest, most innovative version of the term (“The Holy Christian Church”), diligence toward the synchronic use while marking historical considerations serves best (often merely “assembly”).

Similar to the pitfalls of reliance on etymology, there is also the temptation to hijack one of a word’s many meanings over the course of its lifetime, and start inserting that meaning in places where it does not belong, perhaps even anachronistically. Take, for example, the modern words ‘dynamite’ or ‘hilarious’. To assume that these contemporary derivatives shed light on passages like Romans 12:2 or 2 Corinthians 9:7 makes associations that might very well have been foreign to the original writers entirely. Such a danger warrants the warning: More legwork is needed to ascertain how context and components of the word collide to determine its meaning in a given use.

I found Silva’s second chapter to the first part the most engaging and useful of the whole work: Semantic Change and the Role of the Septuagint. Triangulating Hebrew words across their Septuagint (a.k.a. “Old Greek”) Greek usage creates a roadmap of the progress words have undergone across a long period of time. But still here there is warning: Approaching word meanings with the Septuagint as a base text yields its own temptations and potential pitfalls. Take, for example, the fact that the Septuagint’s textual transmission varies from book to book, or even from group of books to group of books. What is more, as the Septuagint was translated by different translators with their different methods, caution is needed before automatically employing a single solution to a given problem without seeing if it really applies.

Part 2 of Biblical Words displays a host of communication principles, with diagrams to match, regarding a word’s sense, symbol, or how it acts as a referent. For Silva, a discussion of sense relations calls for an extensive explanation of what is synonymy and whether or not it is based on the words being contiguous, inclusive, or binary. The matter of context can equally be broken down into components of situation, ambiguity, and various “contextual circles.” This last point of contextual circles proves most useful to the conscientious exegete: Appealing to broader “dogmatic” approaches can be done to a fault, but so can appealing to minute examinations of textual components. One is best to be wary of the interpretive obstacles in both approaches. Revelation is helpful as an example: Is the millennial interpretation the greatest, most prioritized “contextual circle” matter of contention within the work? Answering that question guides how smaller contextual circles are analyzed in the book.

Overall, Silva’s Biblical Words proves to be a high-level analysis of how language works within the corpus of the Bible. Those who claim to have the utility of etymologies and the Septuagint handled would do well to visit Silva’s take on such matters, built upon decades of research and perspective. Silva’s research, far reaching as it can be seen to be in the bibliography, does stand a bit dated as far as where the conversation has gone since the likes of James Barr. Silva wrote this book in 1994, so it obviously does not incorporate the linguistic insight of the past three decades. Still, the principles laid down for conscientious exegesis of words as they coordinate to portray meaning are very helpful and I recommend Silva’s book to all pastors.

PreviousCaring for the Temple
Next A Matter of Perspective