Blessed is the Man: A Man’s Journey Through the Psalms – Psalms of Lament

Blessed is the Man: Psalms of Lament 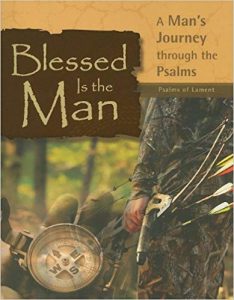 Blessed Is the Man is a devotion book written by a compilation of authors, all connected to the Lutheran Church-Missouri Synod. The eight contributors each have a paragraph-long biography on pages 4 and 5 of the book. Joel D. Biermann writes an introduction to the book and serves as a professor of systematic theology at Concordia Seminary, St. Louis. Tim Radkey writes an introductory “Guide to Men’s Ministry” and serves as the senior pastor of Hope Lutheran Church, in Lubbock, Texas.

Blessed Is the Man is a six-week devotional book based on six psalms of lament (Psalms 44, 74, 77, 80, 83, and 90). It is geared towards men and intended primarily to be used by men who gather together for small-group Bible study. The devotional provides a very consistent structure. The psalm under consideration is first presented in its entirety. Five devotions based on that psalm follow, one for each day of the standard work week, with each devotion focusing on a smaller section of the psalm (anywhere from one to five verses). All five devotions for that week are written by the same author, and all of them begin with an anecdote from the author’s life which is then tied to the content of the psalm. The devotion writer then makes practical applications for the lives of his readers. These application sections include law and gospel, other Scripture and Bible stories, and a focus on the grace of God and the cross of Christ.  Each devotion ends with a pull-quote that summarizes the devotion, a closing prayer, and five discussion questions for the small group of men to consider.

At the end of the week’s devotions, the authors include a summary of the psalm from Martin Luther and ten more discussion questions that deal with the psalm in its entirety. Permission is given to copy all discussion-question pages, and the back of the book contains a leaders’ guide with answers and suggested talking points for each discussion question in the book. The end of the book also presents a helpful “Guy’s Guide to Church Lingo,” which provides definitions and explanations for a number of words and concepts that are frequently used in the Bible and in Bible study settings.

Because this devotional focuses on psalms of lament, most of the devotions focus on how to handle the hardships of life. A few examples include the following: Why might Christians face such hardships? What is God’s role in them? Does he know about them? Allow them? Cause them? Will he fix them? If so, how and when? What message is he communicating to us through them? How are Christians (specifically Christian men) to process such hardships and respond to them?

As the devotion writers tackle these questions, they provide anecdotes from their own lives that are often engaging and relatable. They rightly confront us with our own sins; they rightly remind us of what it means to live in the midst of a sin-cursed world; and they rightly present God as holy, righteous, just, almighty, loving, gracious, and merciful. Most importantly, they always lead the reader to the mercy of God, to his gracious purposes, and to the cross of Christ where his mercy and grace are shown most meaningfully, no matter what the outward circumstances of life might be.

While the structure and general focus of all thirty of the devotions is consistent, each week of devotions have its own strengths and weaknesses. Weeks One and Two of the devotions do not set a particularly strong tone. While there are no doctrinal errors in the Week One devotions, some of the thoughts shared and study questions asked leave the door open for confusion and possible misunderstanding.

For example, the very first Week One devotion tackles the subject of how God speaks to his people. The author mentions how God spoke to him through “the calm, quiet voice that spoke to me in the shower” (20). Later he mentions how “God also speaks to me through other people” (21). He then cites how Luther called this the “mutual conversation” of Christians. The author does go on to say that these voices are only God’s when what they are saying is informed by God’s Word. However, that point needs to come through more clearly, especially if these devotions are intended for small groups of men to discuss. (To be fair, a Week One study question answer in the back of the book conveys a proper understanding of how God communicates to his people, but that puts a good amount of pressure on the leader of the discussion to convey that truth clearly as he leads the discussion.)

In addition, the Week Two devotions leave something to be desired, especially in the area of connecting the thoughts presented in the devotion to what the psalm text says. Psalm 74 (the focus of Week Two) is a lament that questions why God was allowing pagan and immoral enemies to conquer God’s people and destroy God’s temple and then asks God what he was going to do about it. The devotions discuss doctrinally sound topics, but the topics seem to have a rather weak connection to the content of the psalm. For example, the devotions focus on how we go about making our decisions (Week Two – Monday, 46-50), the fleeting nature of life (Week Two – Tuesday, 51-54), loving your neighbor as yourself by coming to the aid of the weak and the defenseless (Week Two – Wednesday, 55-58), taking advantage of opportunities to bear witness to your faith and to the truthfulness of Scripture (Week Two – Thursday, 56-62), and the unforgivable sin (Week Two – Friday, 63-66). Those who use these devotions (especially in a small group setting) could be led to confusion by the weak connections made to the psalm itself.

Weeks Three through Six of the devotions (and Weeks Three through Five in particular) provide the strength of the book. Steve Sandfort’s Week Three devotions contain several engaging and riveting anecdotes that apply very appropriately to the message of Psalm 77 (the focus of Week Three). The practical applications made from his anecdotes and how they tie into the message of the psalm are equally beneficial. The devotions in both Weeks Four and Five are extremely solid, as well. They connect devotional thoughts to the text very vividly, and each devotion is deeply edifying. The reader (or group of readers) will have no shortage of beautiful scriptural concepts to chew on: specific law, calls to repentance, comforting and motivating gospel, all in the context of facing the hardships of life.

With this summary in mind, Blessed Is the Man, will serve many as an enriching devotional resource. Pastors, teachers, staff-ministers, and laymen will benefit from it, in addition to the small groups of men for whom it is intended. These psalms are also very applicable for women. Women could greatly benefit from reading through the devotions although they might have to gloss over the (sometimes forced) connections made specifically for men.

A pastor would do well to review the book himself before recommending it for small groups in his congregation. Perhaps he will draw the same conclusions about the individual weeks of devotions as are stated above, perhaps not. Either way, he would then be able to offer more pointed guidance to those who serve as the leaders of the small group discussions.

PreviousFour Branches – February 2020
Next D̶o̶ ̶Y̶o̶u̶ ̶H̶a̶v̶e̶ Where Are Your Blind Spots?