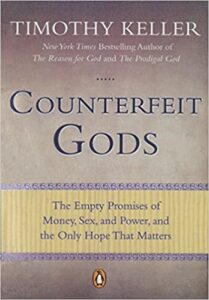 It’s been said you can tell a pastor who reads and one who does not.  Either way a pastor may faithfully share the truths of law and gospel and well proclaim Jesus as the Savior from sin, but a pastor who reads?  His thoughts are fresh and he doesn’t just regurgitate the same arguments, maxims, or illustrations.  It is easier to listen to him, and that is beneficial for his people.

It is something I struggle to do as a busy parish pastor, which explained my interest in Counterfeit Gods by Pastor Timothy Keller.  The book is summarized as follows.

“Success, money, true love, and the life you’ve always wanted.  Many of us placed our faith in these things, believing they held the key to happiness.  The recent economic meltdown [2008] has cast a harsh new light on these pursuits.  In a matter of months, fortunes, marriages, careers, and a secure retirement have disappeared for millions of people.  No wonder so many of us feel lost, alone, disenchanted, and resentful.  But the truth is that we made counterfeit gods out of these good things—gods that can’t give us what we really need.  There is only one God who can wholly satisfy our craving, and now is the perfect time to meet Him again, or for the first time.”

In this description I hoped to encounter a book that would sharpen my teaching of law and gospel for my flock of young, hardworking Americans.  The book also appealed to me as it rings in at an easily digestible 177 pages, and small pages at that.  Finally, although its author is outside of our confessional Lutheran purview, I generally trust the source.  Timothy Keller is the founding pastor of Redeemer Presbyterian Church in the heart of Manhattan, NY.  (This church is a member of the Presbyterian Church in America, which is to the more liberal Presbyterian Church USA somewhat like the WELS to the ELCA.)  In a day and age where mission plants often focus on glitz, glamor, and the third use of the law, Keller appears to distinguish himself with a more careful use of what we might call law and gospel.  It is good to read this book with discernment, but it is helpful to know that this is the starting point.

“Counterfeit Gods” is just another way to talk about idolatry, but I found the distinction useful since many people associate idolatry with statues and think it is not a temptation into which they fall.  In his preface Keller defines idolatry as, “anything more important to you than God, anything that absorbs your heart and imagination more than God, anything you seek to give you what only God can give” (xvii).  Already in the preface I found what I had hoped to get out of this book: Keller’s writing is of the sort that can color my own preaching and teaching.  As an example of this, consider Keller’s description of the counterfeit god “beauty” that many of us ugly men do not understand:

“Each (culture) has its shrines – whether office towers, spas and gyms, studios or stadiums – where sacrifices must be made in order to procure the blessings of the good life and ward off disaster… We may not physically kneel before the statue of Aphrodite, but many young women today are driven into depression and eating disorders by an obsessive concern over their body image…  Physical beauty is a pleasant thing, but if you ‘deify’ it, if you make it the most important thing in a person’s life or a culture’s life, then you have Aphrodite, not just beauty.” (xii)

Keller uses chapter 1 to explore the root problem of sin behind idolatry.  He employs the account of Abraham’s willingness to sacrifice Isaac, he uses it to talk about how even great blessings like children can become counterfeit gods, and he emphasizes Jesus as the substitute that is needed.  In connection with this, Keller describes a woman from his own ministry (Anna) who desperately wanted children, struggled to have kids, was finally blessed with two children… but then became so obsessed with giving them a perfect life that she fell into despair whenever they failed.  It is a microcosm of Keller’s approach throughout the book.  He employs a law-gospel homiletic with historical-grammatical hermeneutic, and he speaks from personal experience and with a pastoral heart.  The following quotation demonstrates how capably Keller weaves this all together:

“There (was) an underlying issue that (had) to be confronted.  She must be able to say in her heart, ‘My desire for completely successful and happy children is selfish.  It’s all about my need to feel worthwhile and valuable.  If I really knew God’s love—then I could accept less-than-perfect kids and wouldn’t be crushing them.  If God’s love meant more to me than my children, I could love my children less selfishly and more truly.’  Anna had to put her ‘Isaacs’ on the altar and give God the central place in her life.” (14)

The remaining chapters focus on different categories of counterfeit gods.  Each chapter includes a contemporary example of the idol in discussion, a more specific example from Keller’s ministry, and an in-depth look at a Bible story that features this malady.  In every case Keller ends by showing how Jesus fills the deep need that each counterfeit god uncovers.  I will proceed by sharing excerpts from these chapters with you so that you may determine whether your preaching and teaching would benefit from this book.

In summary, I got exactly what I hoped to get out of this book.  I found Keller’s writing to be enriching for my preaching and teaching.  Unexpectedly, I also learned much from his biblical examples, and the book would be worthwhile simply for Keller’s excellent grasp of the historical and cultural background of the following accounts: Abraham & Isaac (chapter 1), Jacob & Rachel (chapter 2), Zaccheus (chapter 3), Naaman (chapter 4), Nebuchadnezzar (chapter 5), and Jonah (chapter 6). I plan to consult this book the next time I address any one of these narratives in a sermon or Bible study.

If you enjoyed these examples, I would recommend this book and also Timothy Keller’s more famous works, The Prodigal God & The Reason for God.

PreviousWinterim 2022
Next Mission and Ministry 2022