Did Jesus Speak Greek? The Emerging Evidence of Greek Dominance in First-Century Palestine 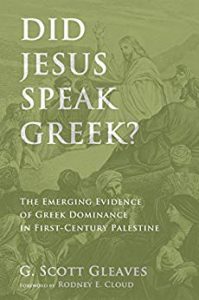 G. Scott Gleaves is the Dean and Associate Professor of New Testament Studies and Christian Ministry of the V. P. Black College of Biblical Studies and Kearley Graduate School of Theology at Faulkner University in Montgomery, Alabama. This book came out of his work on his doctoral dissertation at Amridge University, also in Montgomery.

“But Pastor, wouldn’t Jesus have been speaking in Aramaic?” It was Sunday Bible study a couple years ago, and we were looking closely at some of Jesus’ words, taking some important points from a certain Greek phrase. One member, who really likes to dig deep into Scripture, and has even figured out how to use his phone to look up Greek words and their meanings, raised his hand with that question about the language spoken by Jesus. We had done a study on Bible Translation not too long before, learning just how vital it is to work from the original languages of Scripture.

If what we have in the Greek New Testament is only a translation of what Jesus originally said in Aramaic, it is not possible, even probable, that we could be misunderstanding what Jesus actually said? G. Scott Gleaves recognizes the seriousness of this question as he thoroughly examines historical, archaeological, and biblical evidence concerning the language(s) Jesus spoke. The “legitimacy of Christianity” (xxiii) is at stake.

Gleaves’ thesis is that “within the region of Galilee in Roman Palestine in the first century CE, Greek became the dominant language spoken among Jews and Gentiles” (xxiv). He defends it in a methodical, academic way. He tells you what he’s going to say, he says it, and then he tells you what he said. This book is not meant to be a page-turner. However, this type of writing undergirds the strength of his argument. He presents one piece of evidence after another, acknowledging that none of these standing alone would prove his premise, but taken together, they are like “well-driven tent pegs” which hold up his argument that “Jesus and his disciples utilized the Greek language to communicate orally in addition to Aramaic and Hebrew” (183).

Chapter 1 begins with an overview of the evidence that supports his thesis. As a result of the exile, the Jews’ spoken language had shifted from Hebrew to Aramaic, and so Gleaves states, “There is no doubt that Jesus spoke Aramaic” (3). However, Greek was the lingua franca of the Roman Empire, so that by the first century Jews were also using it in “both secular and sacred literature” (7). Gleaves presents some instances in the New Testament where Jesus spoke with people who would have likely spoken Greek rather than Aramaic (Pilate, a centurion, a Syrophoenician woman, the Greeks who sought him in John 12). He points out that Jesus and his disciples often alluded to or quoted Greek from the LXX (18). Finally, there are just three instances in Mark when Jesus spoke Aramaic words or phrases. “Would it not be odd for Mark to have preserved the Aramaic words that Jesus spoke if it were his custom to speak Aramaic” (23)? Before the chapter ends, Gleaves duly summarizes the main thoughts of leading scholars in this field since the early 1900s, when the Aramaic Hypothesis was introduced.

Chapter 2 returns to the language situation of first century Palestine in general. The section headings he provides throughout the chapter provide a good summary: “Latin: The Administrative Language” (34), “Hebrew: The Sacred Language” (39), “Aramaic: The Declining Language” (46), and “Greek: The Common Language” (53). To support his characterization of Aramaic and Greek, referring to literature from the 100s BCE, he says, “If Aramaic (or Hebrew) was not fading as the common language among the Jews, one wonders why there existed such an accelerated movement toward Greek during this period of Jewish nationalism” (60). In the final section of the chapter, he presents archaeological and literary evidence from several cities in Galilee, showing that Hellenistic influences abounded in this region where Jesus lived and taught (79).

In Chapter 3, Gleaves gives us a detailed look at the backgrounds and language skills of Jesus’ primary disciples. Here he finds “a particular intentionality of Jesus to select individuals who were not only Jewish but also fluent in Greek and who had connections with Hellenism.” (130). The apostles were not only to bring the gospel to Gentiles, but they also preached to many Greek-speaking Jews (91).

In Chapter 4, Gleaves takes the challenge of the Aramaic Hypothesis head on, by appealing to the lack of evidence for Aramaic originals compared to the writings we have in Greek. Every book of the New Testament was written in Greek, for which we have more manuscript witnesses than any other type of ancient literature. “The most interesting observation about the abundance of ancient manuscripts is that none are written in Aramaic” (135). With detailed charts, Gleaves analyzes the connection between the Greek New Testament and LXX; the instances of Aramaic words spoken by Jesus; and the lack of characteristics in the Greek New Testament one would expect to find in a translation from hypothetical Aramaic sources. He also contends that writings in certain church fathers, which could suggest that Matthew wrote a Gospel in Hebrew, are unclear.

Gleaves does not dispute that the Greek New Testament is “saturated with Semitisms” (185). But these elements, rather than suggesting a translation from Aramaic, show that “what we have in the GNT is a hybrid Palestinian Greek – koinē Greek with a Semitic flair – containing an admixture of Aramaic words used in private and semiprivate contexts along with Semitic linguistic peculiarities as spoken by Jesus, his disciples, and the Jews in Palestine during the first century CE” (186).

As the author begins to present his case, it does seem somewhat speculative. He uses language such as “the centurion likely would not have been able to converse in Hebrew or Aramaic…” (16) and “it would be reasonable to assume… as a Gentile, the woman would have spoken Greek and probably would not have conversed with Jesus in Hebrew or Aramaic” (17). But he is forced to speak this way, as are those who have tried to make the case for the Aramaic Hypothesis (26). Some questions about how and which languages were being used in first century Palestine will always remain, simply because no one can go back in time.

Nevertheless, as Gleaves piles up case after case which reasonably point to Greek as a natural language of Jesus and the Jews of his day, his opponents don’t seem to be left with much to place on their side of the scale. Instead chasing after a theory that would necessitate a radical shift in the way we read Scripture, Gleaves is calling for everyone to calm down and actually analyze the evidence. In the end, the dominance of the Greek language fits very well with Paul’s words in Galatians 4:4: “When the time had fully come, God sent his Son…” The Savior was born from the promised people of Israel, yet at a time when he would have been able to naturally speak in a language understood by many other peoples.

There are plenty of useful tidbits in this expansive work. The descriptions of various Galilean cities help to give a pastor a good picture of the places where Jesus did ministry, and the type of people he served. The city of Sepphoris, though not mentioned in Scripture, was a significant part of the Galilean landscape at the time (73-78). Gleaves also gives an enlightening explanation of how Jesus transformed the traditional Jewish role of “disciple” into something that has become synonymous with the role of every Christian believer (83-85). The overview of the lives and activities of the apostles is certainly useful for building up background knowledge.

The amount of detail the author uses in presenting his argument can be staggering. Quite honestly, unless someone is researching a closely related topic, no average parish pastor would want to set aside time to read this entire book – the four-page conclusion gives everything needed. The Aramaic Hypothesis will probably never be brought up in one of your Sunday Bible studies. Yet, issues like this, in which the authenticity of Scripture comes under human criticism, do threaten to undermine the gospel. Understanding a summary of the evidence for Greek being the teaching language of Jesus would have been very valuable for me a few years ago, instead of the partial, bumbling answer I probably offered up to my flock. (I may have had the presence of mind to at least end with, “I’m not sure exactly – I would have to do some research.”)

One thing is missing throughout the book: any specific mention of the Holy Spirit’s verbal inspiration of the Scriptures. The author has a Church of Christ background, so one would expect him to confess this doctrine of Scripture. But perhaps, working in the realm of modern critical scholarship, his argument would be discounted for bringing up the inspiration of the Scriptures. It could be that Gleaves’ purpose for the book falls under “linguistic apologetics.”

We were not there to hear Jesus speak, but he himself promises: “Heaven and earth will pass away, but my words will never pass away” (Matthew 24:35, Mark 13:31, Luke 21:33). In whatever human language Jesus made that promise, he is going to keep it.