Discourse Grammar of the Greek New Testament: A Practical Introduction for Teaching & Exegesis 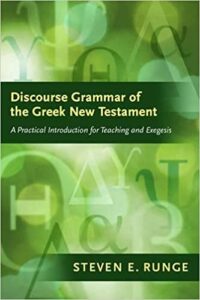 Steven Runge has written his Discourse Grammar of the Greek New Testament with practical benefits very much as the goal. He proposes in his introduction to meet a deep need in linguistic studies for a “function-based approach to language using discourse grammar.” Such an approach would prioritize discussions about pragmatic effects in language rather than those about semantic meanings. Such an approach would be able to distinguish things like prominence from contrast, markedness from default patterns, and emphasis from framing. Most of all, Runge claims more than once that such a function-based approach would interact with the tasks of language in a “cross-linguistic” way—highlighting nearly universal communication principles as they appear both in New Testament Greek and modern English examples.

To keep this kind of approach up throughout the work is certainly ambitious. However, Runge claims to maintain a task-based, cross-linguistic method that is both robust enough to show clear principles at work and flexible enough to handle the variety of challenges as those principles are applied in the New Testament.

The organization of the book fits well with Runge’s objective on discourse grammar study: every language principle or topic is presented through stages. The first stage is an analysis of the subject at hand from the perspective of the traditional grammarians (the “Conventional Explanation”). I found the bibliography of grammarians, linguists, philosophers, and translators (often listed at the end of each chapter according to the topic just covered) to be far-reaching and helpful for further study. Some grammarians will be familiar to WELS pastors (e.g., Daniel Wallace, A.T. Robertson, and Randall Buth).

Alongside these examples, Runge also presents a wide range of experts who have pursued everything from verbal systems to narrative discourse. He does so to establish where discussions have stood historically on the topic of the chapter and his summaries are pointed and helpful. He does not always depart from the assumptions and conclusions drawn from the Conventional Explanation, but in his subsequent “Discourse Explanation” he seeks to expand on the discussion using the function-based, cross-linguistic approach he proposed in his introduction.

The “Discourse Explanation” is the point at which Runge uses concrete New Testament passages that directly address the subject at hand. With a system of markers that includes arrows, targets, quotation marks, and other signals, Runge breaks down the flow of the passage as different elements bring out emphasis, prominence, or focus. This forms his “Application” section in each chapter. I will confess that at the outset of reading this work, I could hardly distinguish between emphasis, prominence, and focus as technical terms. Runge shows that, despite some overlap between these phenomena, each of them is brought out by different usages of particles, verb forms, and word order (better described as “information structure”).

For example, Runge calls one device the “Redundant Quotative Frame,” when someone re-introduces a speech that has already begun. We are all aware of introducing speech with phrases like “He said” or “They yelled,” but once such a quotation is introduced it would hardly seem advantageous to repeat the introductory phrase in similar words. Runge pursues the explanation historically, back to grammarians like Gustaf Dalman who concluded that the usage is strictly a carry-over from Hebrew and Aramaic. Through time, other linguists picked up that this framing does have a clear communicative function apart from mimicking the Old Testament use. Runge carries the discussion forward, noting that so-called “redundancy” actually holds great practical significance in things like marking a change in speaker, a change in hearer, or a switch within a speaker’s speech on subject or theme. Runge then justifies these claims with New Testament passages that employ these redundant quotative frames (e.g., Matthew 21:21, 24; Mark 2:27; 4:9, 13, 21, 24, 26, 30; 7:28; 11:22-23; 12:35; Luke 6:5; 20:3; John 1:20; Acts 5:29).

Out of all the topics addressed in the chapters of Runge’s Discourse Grammar, from the Historical Present to Tail-Head Linkage, I found his description early on of the respective functions of connective particles to be far and away the most useful part of the book. In keeping with his larger objective, Runge shows how, instead of using the default way of connecting propositions (asyndeton), a speaker will often choose to use a connective that is “marked” to provide a particular pragmatic constraint on how the new information is to be understood. This “Markedness Theory” is a useful tool for the translator/reader who wishes to understand a Greek word beyond just a simple gloss.

For instance, many of us were taught δέ as a connective representing the English word “but” in a one-for-one translation. The truth is more layered, as Runge shows: every connective is “marked” or “unmarked” for certain constraints. In the case of δέ, it is not marked for continuity, correlation, forward-pointing, temporality, causality, support, expectation, or correction. What it is marked for is “development.” A very useful graph (p. 57) details which constraints asyndeton, δέ, καί, τότε, οὖν, διὰ τοῦτο, γάρ, μέν, and ἀλλά are each marked and unmarked for.

As mentioned before, Runge’s Grammar is ambitious in its scope and objectives, targeting a host of historical explanations on points of Greek grammar and reworking our understanding of the principles at play through the display of key New Testament examples. His representation of traditional grammarians is fair yet critical. He backs up every position he takes with primary resources in the Greek New Testament or established works of linguists he trusts (especially Stephen Levinsohn). The signals and codes with which he marks the framing devices, addressors/addressees, and other discourse functions can become intimidating to learn but as Runge himself requests: read this grammar through several times to adopt the organizational flow and see the function-based, practical use of the ideas shared. I recommend this Discourse Grammar for every pastor’s shelf (even if only for the discussion on markedness across connectives) to expand the appreciation of principles of discourse as they appear in God’s Word for our preaching, teaching, and studying.

PreviousLooking Forward to Summer Quarter on Campus
Next Seminary Scurry 2022