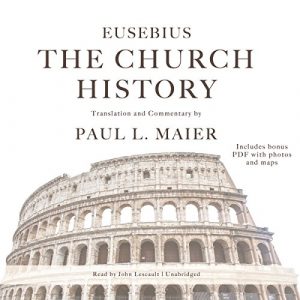 Part I – Why Maier wrote the book

I have already summarized the material in the chronological tables which I have drawn up, but nevertheless in the present work I have undertaken to give the narrative in full detail (1.1).

Previously I summarized this material in my Chronicle, but in the present work I deal with it in the fullest detail (18-19).

A second reason for the new translation is “to correct occasional errors in previous versions” (19).  He gives the following example:

Eusebius has an interesting passage concerning the fate of Pontius Pilate after Pilate’s return to Rome in A.D. 37.  According to one recent translation, Pilate committed suicide, “as the records show” (2.7), but Eusebius’s Greek for the phrase in quotes is much less definite: katexei logos, “word has it” or “tradition holds”—a rather significant difference.  (There is earlier evidence that Pilate was not a suicide.) (19).

The final reason for the book was to provide documentary photographs of the sites Eusebius describes. There are also maps and charts to better understand Eusebius and to make the History come alive (19).  To the author’s knowledge, no translation or commentary has ever done this.

Additionally, Maier follows each of the 10 books in Eusebius’s History with a few pages of his own commentary.  These sections and frequent footnotes allow Maier to provide critical analysis and sometimes correction based on more modern and wide-ranging scholarship.

Part II – My evaluation of the book

In evaluating Maier’s translation and commentary, I’ll give a few examples that jumped out at me.  On page 44 Eusebius quotes Josephus’s Antiquities, Book 18, where he talks about Jesus:

About this time lived Jesus, a wise man, if indeed one ought to call him a man.  For he was the achiever of extraordinary deeds and was a teacher of those who accept the truth gladly.  He won over many Jews and many of the Greeks.  He was the Messiah…

This famous passage is one of the most-cited examples of extra-biblical evidence that Jesus not only existed but had an impact in first century Palestine and beyond.  It’s even more notable because it came from a non-Christian historian.  In a footnote, Maier comments that this citation is of great important because it shows that already at Eusebius’s time words were added to Josephus’s quote, no doubt by well-intentioned Christians, to make the quote more extraordinary and palatable to Christian readers.  As an unbeliever, Josephus would never have referred to Jesus as the Messiah, among other things.  Maier directs the reader to Appendix 1 where the most probable original wording can be found.

In another commentary, Maier debunks modern revisionist history that says Constantine’s conversion to Christianity wasn’t genuine but was only done out of political opportunism.  Although he admits that Eusebius’s flattery of the emperor was often excessive, “the evidence that Constantine was sincere in his Christianity is overwhelming” (334), especially considering the earth-shattering change in many areas of Christian life that Constantine’s victory at the Milvian Bridge held for persecuted Christianity.

In evaluating Maier’s work in general, I appreciate how he gives a positive but measured view of Eusebius.  Respect for a fellow historian and the inclusion of the quotes of other historians preserved in his writings bolster this admiration, I’m sure.  Nevertheless, Maier doesn’t hesitate to share numerous examples where Eusebius erred not just in dating or embellishing events but also in his doctrinal orthodoxy.  Due to the influence Origen had on Eusebius, it’s not hard to imagine the latter falling into heresy. Eusebius was even provisionally excommunicated (324 AD) for taking a sympathetic position toward Arius in the heresy that bears his name. This unbiased look at Eusebius shows that Maier wasn’t too sympathetic toward Eusebius despite his admiration for the Father of Church History.

Part III – How you can this book in your ministry

Would reading this book help you in your ministry?  Three things tell me that it’s worth your time.  First, although not exhaustive, it gives a good general understanding of what happened in the early church from the age of the apostles to the time of Constantine.  Chief among these are the internal fight against heresy and the external withstanding of intermittent yet severe persecution, both of which Jesus had predicted.

Second, the numerous examples of specific martyrs and what they endured in faith would help any preaching and teaching we make against the complacency so prevalent in 21st century American Christianity (and, of course, elsewhere as well).  One example among many is the shocking account of the martyr Blandina, a young slave woman from Lyon in modern-day France accused of cannibalism, incest, and worse.  Eusebius tells that

Blandina was filled with such power that those who tortured her from morning to night grew exhausted and admitted that they were beaten, for they had nothing left to do to her.  They were astounded that she was still alive, since her whole body was smashed and lacerated, and they claimed that any one of the tortures was enough to end life, let alone a succession of them augmented.  But the blessed woman, like a noble athlete, gained in strength while confessing the faith and found comfort for her sufferings by saying, “I am a Christian, and nothing wicked happens among us” (154).

She endured days of continual torture, the torturers themselves needing to take a rest, letting others take over before continuing.  Was this sensationalized?  Perhaps.  But the souls of the martyrs still cry out from beneath the altar.  Although maybe not fare for a regular sermon, modern-day saints would gain a deeper appreciation of those who have gone before us and be encouraged to live lives worthy of the calling we have received.

Third, I found the commentaries by Maier invaluable in giving a brief assessment of the material covered by Eusebius.  He brings in modern scholarship that either supports or contradicts what Eusebius wrote about, some of which was not his own thinking but was what Eusebius found in records located in the library of Caesarea Maritima.   Helpful in this regard are the dates Maier added in the margins of the History so the reader could keep events straight, as Eusebius was prone to jumping around as he recorded events.

In summary, Maier chose to give a fresh translation of Eusebius’s Ecclesiastical History because a readable translation was needed.  Criticisms have been leveled against Eusebius’s work including incorrect dates, faulty history (as shown by other works) and sensationalized events. Maier also has no problem pointing them out when needed and even joining the criticism at times.  But in the whole, he defends the historian’s efforts because he knows how important Eusebius’ work is in understanding what happened at this critical time.  Maier’s commentaries following each chapter, as well as his insightful footnotes and dates added in the margin for important events, make this a worthwhile read.  Additionally, and purely from a historian’s viewpoint, Maier points out that if Eusebius hadn’t quoted other historians so extensively, in many cases we wouldn’t have any writings from those other historians.

If that doesn’t convince the reader to pick up his translation, Maier concludes his introduction with these words: “Here then is the most important work of the most voluminous extant author, pagan or Christian, of the late third and early fourth centuries: the first history of the church ever written” (20).  This readable translation is worth the read.

PreviousCall Day and Graduation 2021
Next Give What You Command, O Lord!