Galilee in the Late Second Temple and Mishnaic Periods, Vol 2

Galilee in the Late Second Temple and Mishnaic Periods, Volume 2: The Archaeological Record from Cities, Towns, and Villages 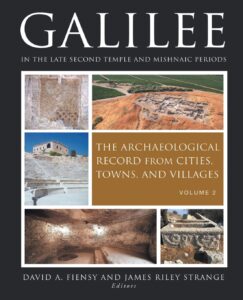 After an introductory chapter on The Transformation from Galil Ha-Goyim to Jewish Galilee, the remaining twenty chapters of this book demonstrate this transformation, reporting on twenty sites excavated throughout both biblically-familiar Lower Galilee and less-familiar Upper Galilee.

This volume begins by looking at cities, towns, and villages located around the Beit Netofa Valley (midway between Tiberias and Haifa), the largest valley in mountainous Galilee. Famous Israeli National Park Sepphoris (Chapter 2) and nearby Kefar Shikhin (Chapter 3) rest on the south side of the Beit Netofa Valley, while Yodefat-Jotapata (Chapter 4) lies on the north side. These three sites are not named in the New Testament, but are all referred to in Josephus’s writings and were important Jewish sites during the First Jewish-Roman War (66-73 AD).

The next three chapters take up the question: Where is Cana? Khirbet Qana (Chapter 5), a popular site for Frankish pilgrims during the Crusader period, also lies on the north side of the Beit Netofa Valley. Two sites on the south side of the Valley, Karm er-Ras (Chapter 6) and nearby Kafr Kanna (Chapter 7), are also mentioned in this discussion. Here the book proposes “that the village of Karm er-Ras was the ancient Cana mentioned in the Gospel of John, or ‘Cana of Galilee’” (154), for the following reasons:

First, the excavations exposed a full-fledged Jewish village from the Late Hellenistic, Roman, and Early Byzantine periods. Second, the earliest pilgrim accounts in the Byzantine period record Christian pilgrims visiting the site of the wedding miracle at Cana in the immediate vicinity of Nazareth, Sepphoris, and Mount Tabor, at a site located near a spring. Third, Karm er-Ras is located just northwest of the ancient village nucleus of Kafr Kanna, which preserves the name of Cana but was a burial ground and an agricultural area rather than a residential quarter in the Roman period. Our understanding is that sometime between the late fourth and the late fifth century, when the village of Karm er-Ras/Cana waned, was resettled, and was finally abandoned, a new Jewish neighborhood was established half a kilometer to the southeast in the area that later became the village nucleus of Kafr Kanna, and that this new neighborhood also adopted the name of Cana. (155)

Kefar Hananya (Chapter 9) a village in the Hananya Valley, running between Ptolemais on the Mediterranean coast and Chorizin north of the Sea of Galilee, was known in rabbinic sources as a pottery-production center whose products were durable (181) and commonly found at dig sites. Tiberias (Chapter 10) and Hamath Tiberias (Chapter 11) showed symbolism from the Greek and Roman culture drawn into their buildings, even into their synagogue structure (215).

Capernaum (Chapter 12) tells a story of coins: “27,565 coins recovered from the site” (222). The limestone synagogue’s “architectural and stylistic features have led some scholars to contend that it dates to the second or third centuries, based on comparison with contemporary art and architecture found in Syria and Asia Minor. Both the numismatic and ceramic finds, however, indicate that it was in fact constructed in the late fifth or early sixth century” (220-221).

Bethsaida (Chapter 13) and Magdala/Taricheae (Chapter 14) round out the Lower Galilee sites spoken of in the New Testament. Khirbet Wadi Hamam (Chapter 15), situated opposite Mount Arbel, is two kilometers west of Magdala. And Huqoq (Chapter 16), in the next valley north of Khirbet Wadi Hamam and almost straight west from Capernaum, are all studied for their differing synagogue styles.

Heading into Upper Galilee we visit our last five sites. Meiron (Chapter 17), Gush Halav (Chapter 18), and Nabratein (Chapter 19) mark the edges of the southern, northern, and eastern perimeter of the foothills stretching east from Upper Galilee’s highest point (Mount Meiron, 1206 meters about sea level). “The Meiron synagogue, which is 28 m long and 13.5 m wide, is one of the largest of the ancient synagogues in Palestine” (384). In Gush Halav “the remains of two synagogues have stood for centuries on the main hill and 625 m east of the main hill” (390). At Nabratein three synagogues have been excavated.

The final two sites in Upper Galilee are Khirbet Shema (Chapter 20) and Kedesh (Chapter 21). Khirbet Shema, only some 400 m south of Meiron, revealed a couple of especially interesting finds. Tombs “were just tens of meters southwest of the main entrance to the synagogue” (416), and the miqveh (ritual bath) was cut into the steep eastern slope, with “a small rock-cut prewash chamber just above the entrance to the immersion pool” (417). Looking down across the northern Huleh Valley, Kedesh brings this volume to a close, but there is no synagogue here.

There were a couple of insights I picked up from reading this volume. I have long wondered why Joseph from Bethlehem of Judah was living way up north in Nazareth of Zebulun. However, “there is no doubt that we have enough archaeological data to identify an ethnic change in the Galilee” following the Maccabean Revolt (19). Colonists from Judea began settling the land, bringing sacred stone vessels, digging out miqveh after miqveh for cleansing, and erecting synagogues for training in the faith. Joseph’s family had been part of the Hasmonean-led change.

When it came to identifying ancient Cana (Chapters 5-7), it was interesting to sift through the various archaeological and historical references. It helped me understand why modern pilgrims who visit Kafr Cana are at least relatively close to the actual site of Jesus’s first miracle.

At first I wondered, “What’s the big deal about all those synagogues?” I guess I didn’t realize that they didn’t exist before the Judean colonists began to settle in Galilee, and that that’s why they were virtually everywhere throughout Galilee. I don’t remember reading about Jesus ever preaching in a synagogue in Judea, where the people could gather at the Jerusalem temple.

This also gives insight into Mark 1:38-39 where Jesus told his disciples, “Let’s go somewhere else, to the neighboring villages, so that I can preach there too. In fact, that is why I have come.” Then he went throughout the whole region of Galilee, preaching in their synagogues and driving out demons. Lower Galilee, Upper Galilee—Jesus had a lot of ground to cover. Cities, towns, and villages—all had synagogues waiting for him to come and teach.

The discoveries at each site helped reveal the activities of the various communities and their interaction with the cultures around them. Galilee’s reconnection with Judean worship became evident; it had spread throughout the land. The editors have made their point that by the time of Jesus there had truly been “an ethnic change in the Galilee.”

The time and place for the fulfillment of Isaiah’s prophecy (9:1) had come: “Nevertheless, there will be no more gloom for the land that was in anguish. In former times, he humbled the land of Zebulun and the land of Naphtali, but in the latter time he will cause it to be glorious, along the way of the sea, beyond the Jordan, in Galilee of the Gentiles.”