The Holy See and Hitler’s Germany

The Holy See and Hitler's Germany 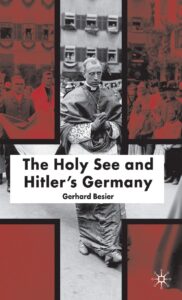 Gerhard Besier, a German theologian, psychologist, and historian, has added another volume to the decades-long debate about whether or not the Vatican, the popes, and their diplomats were silent about the Nazi attacks on Jews in Europe, and thus were pawns of the Nazi regime. Making use of newly released documents, Besier is able to “shed new light on the troubled relations of the Holy See and Hitler’s Germany” (back cover).

The main character in this monograph is Eugenio Pacelli, the future Pope Pius XII. This book does not deal with Pacelli as Pope Pius XII, but with papal diplomacy from 1904-1939, when Pacelli made his way up the Vatican bureaucracy, eventually becoming the pope’s main diplomatic representative, the Cardinal Secretary of State. So, if you want to find out how Pius XII dealt with Nazis and the Holocaust, go elsewhere.

Furthermore, if you have little knowledge of the history between the wars and of the main diplomatic players, this book will be a challenge. It is not a popular history. It is a monograph, focusing with laser-like intensity on the maneuverings of the Vatican diplomats, especially Pacelli, in their relations with the various European totalitarian regimes between the wars. It makes lavish use of the above-mentioned newly released resources. This makes it best for specialists, or those who have read some of the literature on the Popes and the Nazis, Pius XII, and the time between the two World Wars.

For those who choose to read it, you will discover a book that neither damns nor canonizes Pacelli. For neither outcome is possible. It is the mess of history, politics, and power.

As we wade into this history, it is good to remember where things stand at that time. For the Church it is still an era of tangled church-and-state relations. In the early twentieth century there are still national vetoes at papal conclaves, allowing a government to declare a papal candidate unacceptable. The diplomats of the Vatican spend their time negotiating concordats with governments to protect the interests and freedoms of Catholic citizens and political parties. Germany was no exception. Pacelli spent his time furiously seeking a concordat, even, especially, with the Nazi regime when Hitler came to power.

It does not take long to realize that we will deal with tangled motives throughout. This is the mess of history, politics, and power. The Church was neck-deep in it. They were in the world, and in many ways, of the world. The Church tries to survive in a secularizing Europe heading towards another cataclysmic war. There were Nazis on the right and Communists on the left. Personally, Pacelli hated them both equally (35). So, how do you protect Catholic citizens?

As the German Church negotiated with the Nazi government, Besier shows us that they just could not conceive that things would go as far as they did (122). They believed that the Nazis just wanted control over bodies and would allow the Church to have control over souls.

Here we come to one of the theological/historical rubs. Besier observes something that Lutherans have known for years. The Church of Rome is a totalitarian institution. In the 1920s and 1930s it had “little use for Weimar and other democracies” (97-99). The pope is not a democratic leader. And even though since at least John Paul II the Roman Church has been more interested in human rights, and even religious freedom (perhaps even going back to Vatican II), it remains a totalitarian state in many ways. If we see the pope and her diplomats working with, or seeming to tolerate Hitler, Franco, and Mussolini, it may partially be because they share a political affinity.

Back to Pacelli and his diplomacy. The evidence Besier amasses show us that, as a representative of the Holy See, he was not a lackey of Hitler. The Church was not working for Hitler, nor was it sitting idly by and doing nothing while Jews lost their rights. True, they were caught up in the history and could not believe things would go as badly as they did, but they also were repulsed (and terrified) by both fascist and communist regimes. But, here, again, we go back to the above observation. Because the Holy See was not just a spiritual institution, but a political one, it had tangled motives. It had, and desired to maintain, political power and influence. It was protecting the institution. The sought-after concordats were political and theological documents, that is, treaties between sovereign states. And diplomacy can overwhelm theology (64-66). Politics makes strange bedfellows, and when you have to work with Nazis, or Communists, or Franco’s Spain, well, inevitably compromises get made. Some are ugly.

But did Pacelli do nothing? No. But he tended to do things privately rather than publicly. Besier notes that Pacelli saved his most heated rhetoric and rebukes for private moments, private letters, private communications (178). It was not the way of the time to say some things aloud, so to speak. Could that have changed things? There is literature on this concerning the desire for a papal encyclical on the matter of Nazis and the Jews. People begged the pope to say something about the Nazis and what was happening in Germany.

I see myself in this behavior, in my own preaching and counseling and pastoral care. Am I too easily satisfied with the hint, a word meant to be understood, an attempt, a way to cover myself and say, “I dealt with that or talked about that,” but not in such a way as to get in trouble. Am I too concerned with peace? Certainly, we can all do this. Perhaps the pope and his diplomats thought subtlety would accomplish more, or they also knew, “Anything more and people will be hurt worse.” Perhaps they were cowards. Perhaps they were more sympathetic than they should have been to fascism. Perhaps there was a lingering anti-Semitism here too, even if it did not manifest itself in actively aiding the Nazis in their destruction of European Jewry. Incrementalism, compromise, patience, cowardice, lack of foresight. And yet history shows us many million dead Jews and other innocents, and we wonder what would have happened if a few more good men would have stood up and said, “No. We will not let this go.”