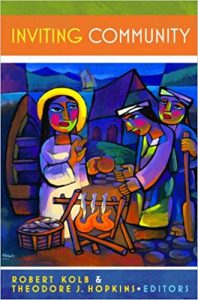 Theodore J. Hopkins taught theology at Lutheran High School South, and was a Ph.D. candidate at Concordia Seminary, St. Louis during the time of this publication. He currently is an assistant professor at Concordia University, Ann Arbor, MI.

Kolb and Hopkins admirably set the tone and direction for this collection of essays in their introduction to the volume.  Instead of offering yet another approach to “ecclesial reflections” that are “abstracted from western congregations”, these essayists aim to offer ecclesial reflections that are both solid theologically, but also eminently practical (11).  “To restate the thesis, ecclesiology best serves the church by reflecting upon concrete contexts and situations and addressing these situations to help the church proclaim the gospel faithfully and form disciples of Jesus who truthfully embody the gospel at all times” (15).  Following this helpful orientation to the book, the editors divide the book into three sections of essays: 1) the church as inviting community, 2) the church practicing inviting community, and 3) the church addressing challenges to inviting community.  There are twelve total essays in the book.

Three essays in particular jumped out to this reviewer.  The essayist, Kent Burreson, addressed the church practicing inviting community under the title, “Hospitable Hosts: Forming An Inviting Liturgical Community.”  Even before I began reading the essay, I hoped that the essayist would address a glaring contraction that seemed to sit in his thesis.  How can a liturgical community remain inviting when biblical, pastoral practice urges close/d communion?  In the first part of the essay, Burreson spends much time developing his thesis on the basis of history and Scripture.  He calls on churches to practice what he calls “liturgical hospitality.”  His most powerful writing takes place in the final pages of his essay.  There, he names the challenges that churches will face as they strive to practice liturgical hospitality.  The first challenge named is the overriding challenge that I began with in reading the essay.  “Clearly, the last section identified one of the primary challenges: limiting the Supper to the baptized and only communing people with whom a church body is in full fellowship” (101).  Burreson takes this challenge head on.  He does not suggest that churches should suddenly open up communion.  In fact, in a footnote, he affirms that “such a practice of hospitality, inviting unworthy or inappropriate guests to the Lord’s Supper, actually would be gravely inhospitable” (101).  Instead, Burreson suggests other possibilities for practicing close/d communion while still practicing liturgical hospitality.  He asks pastors to consider the use of pax bread.  “This is bread baked for the Lord’s Supper that is not used and consecrated in the Supper itself” (104).  Other suggestions include ending the service with a joint meal as a kind of substitution for the Lord’s Supper itself, prayer for non-communicants, and also instruction for non-communicants during the time of communion.

While Burreson’s suggestions are creative, they also have great potential to cause confusion.  The use of pax bread would be difficult to explain and would certainly lead to misunderstandings.  I also think that singling out non-communicants might embarrass them if we looked to pray just for those not yet confirmed or worse asked them to step outside for instruction on the sacrament.  I still find that a loving practice of close/d communion includes a carefully worded explanation by the pastor.  An invitation to participate in the sacrament is issued to those properly prepared and in unity of faith.  Another invitation is issued to those not yet confirmed to prepare themselves for such a feast by a thorough study of Scripture.  I would have liked to have read Burreson’s own carefully worded invitation to both groups of people.  Such a fine practice leads to a community that invites not just to church but to deepen their faith through the study of the catechism and also preparation for the Lord’s Supper.

The second essay that caught my attention was an essay by David Schmitt.  In it, he addresses the Christian devotional life under the title “Devotion and Community.”  I read the essay with special delight because of the essayist’s way with story, but also because of his redefinition of the word devotion.  He advocates for a broadening of the word.  Too often, when we think of the word devotion we think only of our quiet time with God.  He rightly points out that “this definition tends to limit our understanding of devotion: meditating on God’s Word becomes the only form of devotion instead of being the source of all devotion” (112).  Instead of such a limiting understanding of devotion, Schmitt proposes that devotion can take many forms as each Christian responds to a particular article of faith.  This Christian devotion becomes focused on mission in that the world will see this Christian devotion and want to know.

While there is much to commend in this particular essay, I believe that thinking of devotion primarily in terms of my devotion to God is limiting in some ways.  One of the most formative essays on the devotional life for me was in an essay written by Rich Gurgel.  His starting point in his definition of the devotional life is not human-centered at all.  Instead, it is God-centered.  It is centered in God’s devotion to the sinner.  In that article, Gurgel quotes Bivens, “I have learned, too often the hard way, that the devotional life is primarily to be viewed from the standpoint of God’s devotion to me rather than my devotion to him. You should too. Don’t waste time and energy thinking otherwise” (Gurgel 5).[1]  In my own way of thinking, both Schmitt and Gurgel make helpful additions to the idea of devotions and the devotional life.  Gurgel reminds us that it is centered in the gospel.  Schmitt reminds us that it means more than just quiet time with God.

The most compelling essay in this collection was one written by David Peter called, “The Challenge of Church Membership in the Twenty-First Century: Old and New Directions.”  I have always felt embarrassed to use the term membership.  It’s a word in my context that almost exclusively brings to mind the gym membership or the YMCA membership because those are the places where the word is encountered most today.  Beyond the confusion that the word itself causes, the contemporary challenges that Peter names to formal church membership are real ones.  Loyalty and denominational ties are at an all-time low due to our consumer culture.  Pluralism and resistance to authority all contribute to the problem of membership in local congregations.  While some are looking for what Peter calls new membership paradigms by adding multiple categories, changing the language of membership to partner or owner or something else, or simply not using categories at all, Peter reaffirms the traditional membership model of baptized and communicant members.  These categories are useful in teaching our sacramental focus and our commitment to each other and to God as members of the body of Christ.  Peter goes on to encourage the use of these categories by faithfully inviting the ambivalent to greater participation.  His specific encouragement to pastors and leaders is to “intentionally strive to cultivate caring and supportive relationships…”  Peter does not invent new membership categories, but rather affirms the old ones and informs the reader of their true sacramental and biblical roots.

In this volume, every busy pastor or Christian will find several essays to hit the mark in their own circumstances.  Are you considering starting an online ministry like streaming services?  The best treatment of the intersection of church and technology that I have read to date is in this volume.  It will make you reconsider such a strategy.  Is your church in a city and wondering how to fund the mission?  There is an essay here that struggles with the same issues and provides some helpful ideas to explore.  What about people who love this world too much?  There is an essay here that strikes a good middle ground.  Some of the ideas here are strange.  Some are simply unbiblical. However some really do take us to a good place and are worth exploring as the church seeks to be an inviting community.