Low Anthropology: The Unlikely Key to a Gracious View of Others (and Yourself) 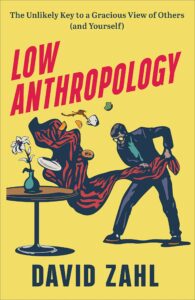 The theological middle ground is a comfortable place for us confessional Lutherans. As Deutschlander’s The Narrow Lutheran Middle expresses so well, the answer between two theological extremes is often somewhere in between, holding two things in tension. David Zahl’s new book also deals in extremes, but handles things a bit differently. When it comes to high anthropology vs. low anthropology, Zahl essentially encourages us to go as low as possible.

Zahl defines anthropology as “our operative theory of human nature” (13), or the way that we generally view human beings and who we are. The high/low dichotomy is the driving force of the narrative and provides the structure for the entire book. High anthropology is to be optimistic in our basic assumptions about humanity, seeing humankind as basically good, or at the very least a blank slate. Low anthropology, on the other hand, is a “more sober estimation;” it sees “the human spirit as something that veers, by default, in a malign direction . . . [describing] people as finite, blind, and, in many cases, quite weak” (16). Low anthropology is honest about humanity’s faults and failings across the board.

None of this comes as a surprise to us who understand the concept of original sin and the many Bible passages that speak to humanity’s completely corrupt nature. What Zahl does so well in this book, though, is make useful applications of these familiar principles. He demonstrates that we are inclined to gravitate toward a high anthropology, and that affects us in serious ways, whether we realize it or not. Any time we despair over our broken lives from comparing ourselves to someone else’s social media persona, we’ve slipped into a type of high anthropology (“Why does everyone else have it so much more together than I do?”). Any time we make sweeping judgments about people without considering their circumstances, we’ve assassinated their character with high anthropology (“They should be better than that!”). Then Zahl argues that high anthropology results in low theology—and vice versa: “Any discussion of theology, who or what God is, must first begin with an accurate appreciation of who we are” (38), and toward the end of the book: “The lower your anthropology, the higher your Christology will be” (194).

The rest of the book, like Gaul, is divided into three parts. Part 1, “The Shape of Low Anthropology,” describes its three major pillars: Limitation, Doubleness, and Self-Centeredness. Limitation is the realistic appraisal of humanity’s weaknesses, and then using that knowledge as a liberation from outside pressures. When one accepts their human frailty, they are less likely to burn themselves out with impossible standards of perfection. Doubleness “refers to the competing forces, or voices, that drive our behavior” (66). In other words, so often we know what is right, but we still do what is wrong. In this chapter Zahl makes the first of many mentions of Augustine. Regarding Self-centeredness, Zahl starts to talk in terms that we Lutherans use when discussing the proper distinction between Law and Gospel. “Low anthropology proceeds from the foundational insight that human beings are egocentric and—crucially—that this is not a neutral trait” (89). The chapter ends with the strong declaration: “Forgiveness is the only way out” (109). Zahl elaborates on this later.

Part 2 is “The Mechanics of Low Anthropology.” The first chapter is on how we have a tendency to gravitate toward high anthropology, even making excuses to avoid a lower view. Zahl goes to great lengths to explain that low anthropology is different from self-loathing, and it is certainly not depression (which he says as a man who, himself, has been diagnosed with clinical depression). His heart goes out to the many people who were raised in churches that beat them down with guilt trips and oppressive law without any real understanding or proclamation of the gospel. A proper appraisal of our human nature should rather be used to prepare us to hear the promises of God: “The most potent [promises] are not premised on our readiness or openness. Perhaps this is what makes the promise of God to intervene with love on behalf of those wrapped up in all manner of avoidance so persuasive” (132). The second chapter in this section lists the fruit of low anthropology, which Zahl lists as humility, unity, community, courtesy, humor, and compassion.

Finally, part 3 is “The Life of Low Anthropology.” The four chapters in this section talk about how low anthropology affects our sense of self, our relationships, our politics, and our religion. These short chapters are a sort of “So what?” section, where Zahl does his best to show that low anthropology has immanent practical applications to our lives. I thought the most useful chapter in this section was the final one on religion. Zahl demonstrates his understanding of the difference between justification and sanctification (and the proper distinction between law and gospel). He vehemently argues against Christian perfectionism, calling it a product of high anthropology rather than high theology, and rightly labeling it as Semi-Pelagianism. Rather than conversion making someone less limited, less doubled, and less self-centered, Zahl invokes Luther’s simul justus et peccator to conclude: “In so many ways, the Christian actually seems to remain the same person after conversion” (190).

That final chapter and conclusion were almost sermonic, as Zahl lets the gospel predominate to finish his work. He ties Augustinian moral philosophy together with quotes from Luther to beautifully articulate not only proper anthropology, but also theology, Christology, and soteriology. “To a person steeped in low anthropology, the announcement that God not only is real but also loves you in full view of your personal reality—to a sacrificial extent—comes as the sort of shock that transforms despair into hope” (203).

While I do think Zahl has a good grasp of law and gospel, I wish he spoke more clearly and consistently about it. He regularly uses the terminology of high anthropology to proclaim law, and the corresponding cure was often not gospel, but rather low anthropology. A common device was something along the lines of “[Insert sin] is a product of high anthropology . . . but a low anthropology instead leads to [insert solution].” I understood what he was going for: low anthropology leads to high theology and Christology, and therefore the gospel—but too often “low anthropology” became shorthand for the gospel itself, which it really isn’t. Low anthropology is still law. The maladies of high anthropology should have correlated to the gospel directly, rather than to the gospel-by-way-of-low anthropology. However, Zahl proclaims unfettered gospel so strongly in the last chapter and conclusion that the reader can’t help but understand: “this is where this guy’s ‘low anthropology’ is meant to end up all along.” My estimation is that Zahl spoke in these terms throughout the book because he wanted the ending to be the narrative and theological high point. Perhaps this was his way of making his book more accessible to non-Christians—like his other book Seculosity, the whole volume is driven by anecdotes far more than Scripture. Sadly, the result of this approach was an unfortunate muddying of the law-gospel waters, and any reader who gives up after the first 100 or 150 pages may not reach his sweeping gospel proclamation where he attempts (successfully, I think!) to bring it all together.

Low Anthropology is approachable and humorous while remaining profound. Pastors are not going to find any earth-shattering dogmatic revelations within, but they will find a bounty of insightful applications for themselves and their parishioners. Laypeople and ministers alike will find this book a useful foil to the self-help craze, because the solutions are presented not in self but in God.

PreviousBehind the Scenes
Next A Long, Winding Path to the Ministry