Luther and the Stories of God: Biblical Narratives as a Foundation for Christian Living

Luther and the Stories of God 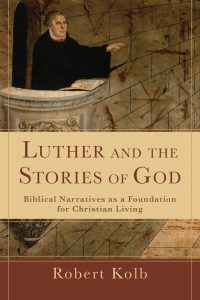 Robert Kolb (PhD, University of Wisconsin) is Mission Professor of Systematic Theology emeritus at Concordia Seminary and the author of numerous books.  Some readers of this review may recognize him as an editor for one of the more recently published editions of the Book of Concord.

In chapter one, Kolb discusses Luther’s metanarrative, that is, “the framework of the narrative’s reality and the skeleton for the construction of the stories being told” (1). Luther’s metanarrative was driven by the principle of Sola Scriptura.  Therefore, Luther saw every story in the Bible as one which interacted with and which complemented God’s big story, the story of how our justification and eternal salvation was promised and accomplished in human history through Jesus Christ.  Luther embraced the stories of the Scriptures as the best way to teach the Christian faith because we can know nothing about God apart from his interaction with humans.  Kolb convincingly demonstrates that Luther’s hermeneutic in his dealing with the biblical stories always kept in mind the distinction between law and gospel, the theology of the cross, and the distinction between the active and passive righteousness of humans.

In chapter two, entitled “Luther the Storyteller,” Kolb explores how Luther used biblical stories in the pulpit, classroom, and on the printed page.  Luther saw the value of communicating God’s truth through biblical narrative because “human beings experience life in narrative form” (31).  It was for this reason that Luther moved away from the medieval practice of the allegorical method of interpretation, which focused on some heavenly meaning of the narratives, to the realities of the biblical narratives, which communicated God’s realities.  Real stories about real human life are where God’s reality rests.

Chapter three explores Luther’s definition of being human.  “Luther defined what it means to be human fundamentally in terms of the identity of the human person as one whom God regards as righteous and as his child rather than in terms of the human actions that Luther counted as derivative from and secondary to the person” (66).  Luther also defined what it means to be human in terms of his explanation of the First Commandment: to be human is to fear, love, and trust in God above all things.  In explaining this concept, Luther drew extensively from the narrative of the fall into sin.  Kolb writes, “Luther’s views of both God and what it means to be human were so intensely personal that therefore, because trust determines human personhood and personality for him, narratives served him as effective tools for the mysterious cultivation of trusting people of God.” (97)

In chapter four, Kolb discusses how Luther viewed suffering.  Luther knew that suffering was an unavoidable reality for humans.  However, “(Luther) rejected any attempt to formulate a complete explanation of why suffering happens…Such questions lay beyond Luther’s grasp, and he had learned that no answer would satisfy.  In the midst of suffering and questions about the reasons for evil, he simply turned to his Creator.  His theodicy, his explanation of evil, began and ended by being still and recognizing God as God.” (99)  Luther recognized evil was brought about by the devil and our sinful nature, and that evil was permitted by God to serve his good purposes, to test faith and work repentance in his people.  Therefore, “(Luther) did…elucidate God’s call to repentance through biblical stories of hardship and adversity, and he found consolation and encouragement for sufferers in accounts of the biblical saints whose troubles and tragedies had provided the Holy Spirit a theater for the display of God’s merciful intervention in human history.” (100)

Chapter five, “Active Obedience in the Sacred Realm,” explores Luther’s contention that Christians’ love for God and the love for their neighbors intersect when they gather for worship and the study of Scripture.  “Luther believed that loving the neighbor meant, first of all, converting others and bringing them to faith, and then demonstrating every other kind of love that truly benefits the neighbor” (126).  Luther was confident that exposure to Scripture would translate into trust for God and also into pious daily living.  Kolb offers up this interesting observation worth pondering: “(Luther) dreamed of the day when congregations would have such small groups that would gather for prayer and Bible study.  This reflects his confidence in the Holy Spirit and his use of the word found in Scripture and delivered by the saints from its pages” (130).

Chapter six focuses on how Luther used the Bible’s narratives to relate how the Christian was to live out his faith in everyday life through his vocations.  “Luther presumed that the examples of the patriarchs, their families, and their contemporaries, as well as the New Testament contemporaries of Jesus and Paul, provided guidance for conducting daily life in the sixteenth century.” (142-143)

In the final chapter, entitled “Living Well Leads to Dying Well: The Completion of the Christian Life,” Kolb discusses how Luther traced the origin of death back to the fall in the Garden of Eden.  Furthermore, he pointed to the promise of Genesis 3:15 as the deliverance which brings us back from death to life (171).  Luther drew from the stories of God to establish the Christian’s sense of equilibrium in the face of death.  The narratives of Scripture make clear that death is the Christian’s great enemy.  Nevertheless, “confidence in the promise of the resurrection and life eternal because of the work of Christ minimized (Luther’s) fear of death, which he regarded as natural and justified because death is the destruction of the goodness of human life” (173).

In addition to fulfilling this book’s stated purpose, Kolb offers many interesting observations about how Luther thought about the work of a pastor.  One of those thought-provoking insights is Luther’s view on preachers and the noble task of biblical preaching.  “Good preachers, Luther told (his students), are effective teachers, good thinkers, with rhetorical skills, a good voice, a good memory, and the ability to recognize when to stop.  They are diligent in their preparation, throwing heart and soul into their sermons, and they must be ready to take criticism, even unfair criticism.  They should remember that they must patiently bear such criticism and dissatisfaction with their preaching.  But above all, preachers must know that the Word of God has taken them captive and that God has called them to serve him by proclaiming that Word.” (30)

Kolb shows himself to be at home in the writings of Luther, displaying a thorough knowledge of the reformer’s works.  In doing so he reminds us that Luther was at home in the Scriptures and trusted God’s Word as the only rule for faith and life.  This volume is thorough and scholarly, yet accessible for the average pastoral reader.  It is recommended reading for those who wish to deepen their understanding of Luther’s thought world.  It serves as a wonderful reminder that the Lord interacts in grace with his people as he speaks to them in his Word, just as he graciously interacted with those people whose stories are recorded on the pages of his Word.

PreviousFour Branches October 2018
Next Do You Love Your Hearers? Then Speak of God’s Judgment!