A Manual for Creating Atheists

A Manual for Creating Atheists 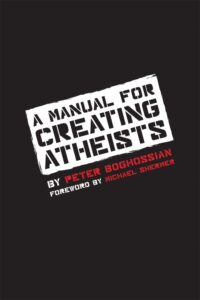 Dr. Peter Boghossian gained some fame in September 2021 when he posted a letter on his Substack in which he resigned from his full-time professorship in the philosophy department at Portland State University. Boghossian resigned because he felt the university had become closed-minded and “sacrificed ideas for ideology.” But this was not the first time he published his thoughts on perceived closed-mindedness. In his 2013 book A Manual for Creating Atheists, Boghossian addresses what he sees as the closed-mindedness of the “faithful.” The book attempts “to talk people out of their faith, help them value critical thinking, cast doubt on their religious beliefs, mistrust their faith, abandon superstition, and ultimately embrace rationality and reason” (back cover).

The book contains nine chapters. Chapter 1 describes the kind of person who can begin to talk someone out of their faith. Boghossian calls such a person a “street epistemologist” who “offers a humanistic vision” (17) and is “an articulate, clear, helpful voice with an unremitting desire to help people overcome their faith and to create a better world—a world that uses intelligence, reason, rationality, thoughtfulness, ingenuity, sincerity, science, and kindness to build the future” (16).

In chapter 2, Boghossian looks at the topic of faith. While his book takes issues with all kinds of religions, Christianity is most often under examination. Boghossian calls any faith claim a “deepity,” that is, “a statement that looks profound but is not” (21). For him, Hebrews 11:1 is a quintessential deepity, and he spends time picking it apart, particularly the use of the Greek word elenchus, which he characterizes as a watering-down of its previous Socratic use. Boghossian thinks Hebrews 11:1 allows people to believe something even if the person does not have enough evidence to justify the belief (24). Therefore, he defines ‘faith’ as “believing something anyway” (24), and he demands that the word ‘faith’ should be “disambiguated from words such as ‘promise,’ ‘confidence,’ ‘trust,’ and, especially, ‘hope’” (26).

Chapter 3 lays more groundwork for the book’s task. It explains what he calls “doxastic closure” (“either a specific belief one holds, or that one’s entire belief system, is resistant to revision” [49]). The chapter also discusses epistemology (one’s system for gaining knowledge) because understanding people’s reasoning process is the key to talking people out of their faith. Boghossian is convinced that a particular kind of epistemology can be used to reason people out of all kinds of “unreasonable beliefs” (46).

Chapters 4 and 5 outline the kind of epistemology Boghossian relies on. These chapters begin to explain interventions and strategies which will talk people out of their faith. Here, Boghossian relies heavily on the Socratic method. In fact, chapter five is entirely dedicated to the Socratic method because it is “a powerful, no cost, dialectical intervention that can help people reason away their faith” (107). He summarizes, “belief in God(s) is not the problem. Belief without evidence is the problem” (77). Boghossian champions Socrates’ style because it makes people “aware of their own ignorance” (107).

Chapter 6 assumes that the forgoing strategies have been effective and that someone has fallen from faith. In such cases, “inquiry and wonder must replace dogmatism and certainty” (135). If society is to achieve a “New Enlightenment” (135), then it must be accepted that “not claiming to know something you don’t know … is a virtue” (137).

Chapters 8 and 9 deal less with the epistemology of individuals on the street and more with the epistemology of organizations or institutions. In chapter 8, Boghossian is confident that universities can be cornerstones “in the larger strategy to combat faith, promote reason and rationality, and create skeptics” (177). But he also acknowledges an uphill battle because relativism in universities has made it “immoral” to criticize bad thinking (178). The final chapter suggests that religious institutions need to be crippled financially and that faith should be treated as “a public health crisis” (216). Boghossian calls faith “the God virus” (216), wants the CDC to put religious epistemologies on their various lists, and argues that the DSM should “remove religious exemption for delusion” (221).

The book finishes with three appendices (including a syllabus for introducing Socrates and an “antirelativism roadmap”), with a glossary of terms, and with a helpful index of terms and people.

I recommend reading A Manual for Creating Atheists for both its style and its content. Concerning style, the book offers up some technical language but maintains readability throughout. While I would prefer footnotes as opposed to notes at the end of each chapter, the endnotes provide good content. Many of the chapters end with examples of “interventions” which Boghossian has performed, and those are good illustrative material. Additionally, each chapter has a “dig deeper” section which offers plenty of resources which one could investigate. Finally, even if the closing chapters sound a pretty ominous tone, his style is not marked by Richard Dawkins’ scorn or derision.

Concerning content, I think there is something for pastors with all sorts of different interests. There are certain communication principles that can benefit our ministries. (To that end, I would also recommend another book he co-authored, How to Have Difficult Conversations with Anyone.) If you like doing deep dives into apologetics, you will have plenty to ponder here. You will also have plenty you can challenge.

But even if you don’t get all that excited about apologetics, there is plenty which can help our preaching, teaching, and witnessing. Boghossian communicates how he understands Christian theological statements from his own reading and from what he’s heard lay people say. In doing so, he gives preachers, teachers, and evangelists opportunities to reflect on what and how they are communicating from the pulpit, in the classroom, and on the street.

Most of the book’s interventions with Christians deal with people we Lutherans could label as “Enthusiasts.” Boghossian easily introduces doubt into their faith because their faith is based on feelings, not the Word. In the pulpit, are we preaching faith in our faith or faith in the works and words of our God? In catechesis, are we exemplifying good biblical hermeneutics and a sense of wonder for God’s created order? Does our evangelism communicate that Jesus of Nazareth is the Christ because of the objective, historical fact that he rose from the dead? If not, we are exposing our people to the devilish street epistemology which Boghossian advocates. Personally, Boghossian exposed weaknesses in my communication and gave me an urgency to be better in how I understand canonicity and in how I equip my youth confirmands. To be sure, Boghossian and his street epistemologists are foes to take seriously.

But in the book Boghossian also displays weaknesses. His tone in the interventions seem less sincere and less respectful than he otherwise advocates. It seems to come from overconfidence, and Boghossian is probably overconfident because he gives the impression that he has little reason to even consider evidence for the resurrection. But above all, Boghossian grossly mischaracterizes the robust way Lutherans understand saving faith’s characteristics and actions as the Bible teaches and illustrates. He states, “Trust and faith are not the same” (168). He illustrates his point by insisting that he doesn’t have faith in his wife; rather, he has trust in her because she has given him many examples of her love. But this is exactly why we have faith in our triune God. We have faith in him because he has given us ample reasons to trust his words and works, as proven in the resurrection of Jesus Christ. Therefore, if we double down on the words and works of God, we know we and our people will be fine when dealing with street epistemologists.

We can appreciate that this atheist was willing to do an episode on The Babylon Bee Podcast (podcast #15) and can sympathize with some of Peter Boghossian’s gripes with academia and society. But his critique of our faith we outrightly reject because that epistemology is ultimately an embodiment of 1 Corinthians 1:22. Boghossian demands certain evidences and worships Greek wisdom, especially that of Socrates. But in doing so, he helps refine our preaching, teaching, and evangelizing so that we can be echoes of 1 Corinthians 1:23, proclaiming God’s wisdom and power as evidenced in Christ crucified and raised for us.

PreviousLast Chance to Match
Next Symposium 2022