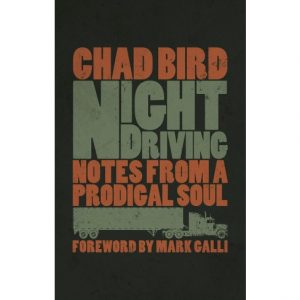 Chad Bird is a former LCMS pastor and seminary professor who now works as a speaker, scholar, writer, and truck driver. He has contributed articles to Modern Reformation, The Federalist, and other publications. He also cohosts the podcast 40 Minutes in the Old Testament and blogs at chadbird.com.

Chad Bird undertakes in this short volume to tell the story of his fall while inviting readers to tell their own story alongside his. The hope is that the reader can “compare narratives of loss, regret, addiction, pain… [and] more importantly… to see our stories in the context of a bigger story” (2). The truth he wants his readers to see most of all is this: “God specializes in broken people… No matter how badly we have wrecked our lives, our Father is in the thick of that disaster to begin the work of making us whole again” (15).

Mark Galli, Editor in Chief of Christianity Today, writes, “[I]n this little book, Chad has a singular purpose… he wants us to be absolutely clear about what God has done for us in Christ.” (xi). Galli also notes insightfully, “The way Chad talks about all this will make some readers nervous… Some are going to accuse him of antinomianism…” (x).

Bird talks about his desires while a student to be a seminary professor and achieve acclaim in his synod. He explains how his pride and covetousness ultimately led to his downfall. After achieving what he had always hoped to, he soon found his life shattered after his adultery and lies caught up to him. His wife divorced him and moved across the country with their children. He lost his ministry and many of the friends and colleagues with whom he had once been close. Bird discusses the depravity of his sinful flesh even after such a fall as he tried to defend sin, defeat it single handedly, embrace new darkness to avoid the pain of the light, and blame God for it all.

Bird is candid, and at times crude, in his depiction of his spiritual state during the years that followed these events. He was depressed, alcoholic, at times suicidal, and always bitter and angry with himself, others, and God. He found himself trying to atone for what he had done by allowing and even seeking out ways to hurt himself. Looking back he could write, “In performing rituals of regret, we search for an atonement in which we’re the sacrificial victim” (23). But his goal was clear, “If I hate myself enough for my actions, maybe God will love me” (23).

After losing his ministry, Bird became a truck driver in order to live near his children. While driving, a turning point came in his spiritual nightmare as he began reading the book of Psalms. “On the long drives at night, I found in the Psalms what I had been searching for: the language for the languishing… They translate our suffering into speech, yes, but they also translate God’s seeming absence into a surprising presence” (38).

Finding out that God was near him even in his hurt and shame was a critical realization, but it was not the end of the story. Bird found himself struggling to accept God’s forgiveness while also struggling to forgive others. He writes, “Lurking behind every reason we don’t forgive is one fundamental impulse: we desire to control the offenders. We might dangle forgiveness in front of them, like a carrot before a horse, until finally they do our will. Or we offer to overlook everything if, and only if, they apologize. Or we decide that the people who’ve hurt us need to see our pain, so they themselves feel remorse. If we forgive them, we’ll send the message that we’re okay. But we’re not okay, and as long as we’re not, they shouldn’t be, either” (57).

Bird offers a good insight into forgiveness with his take on the myth of the necessity of forgiving ourselves. He writes, “Only when we forgive ourselves will this haunting ghost of guilt finally vanish for good. I swallowed this myth whole – hook, line, and sinker. God had done his part; now it was up to me to do mine” (60). Bird’s conclusion to this topic is spot on: “Christ’s forgiveness precedes our repentance – and calls it forth… Those who sin against us don’t owe us an apology. They don’t owe us repentance, tears, promises of improvement, vows never to repeat what they’ve done. Nothing is what they owe. When we forgive, we are pressing into the palm of a fellow transgressor the coin of freedom with which Christ has enriched us. We give only what we’ve first received” (64).

One of the most refreshing aspects of this book was the honest talk about the continuing struggle against sin. This book does not have a whiff of the theology of glory in it. Bird writes, “I’ve never made huge strides in holiness, never seen my sanctification level skyrocket, never trampled sin after sin underfoot. If such triumphant believers exist, they’re a breed of Christian unicorn we’ll never discover because they don’t go around bragging about it” (66). Bird’s discussion of his struggle to un-love ex-sins will resonate with anyone who is simul iustus et peccator. And his conclusion, while not the magic bullet some Christians seek in their lives of sanctification, is spot on, “[E]very day of this life is a day to relearn who we really are in the eyes of God… [Jesus] is your story, your identity, your everything” (80).

Bird also includes some good food for thought on losing the masks we try to wear and finding strength in the fellowship of the church. He has some tough things to say to the churches that preach grace but find themselves drawing the line with certain people or certain sins. Bird often found himself disappointed with his church as he tried to move forward from his past. The masks people wore in church often would not allow them to be honest about their own struggles and would lead to shocked disappointment when Bird took his own mask off. Yet Bird does not give up on the church. Just the opposite in fact, saying, “How can you learn to love a disappointing church? [Come] to terms with a humbling and sobering fact: the church finds me just as unattractive as I find her” (118-19).

This book is remarkable in its punch for such a short volume. Bird presents solid Confessional Lutheran theology as it practically relates to the terrible messes we make because of our sin. There were times where he was cruder in his language and approach than seemed necessary, but given the content and context of his story perhaps this is understandable. At times he pushed the envelope in talking about God’s role in our sin and appropriate ways for us to respond to God in our pain. But overall this book leaves the reader with a clear vision of God’s grace shown to us in Christ.

Rod Rosenbladt, cohost of the White Horse Inn radio show, commented, “Most ‘tell-all’ books have a ‘self-atonement-by-confession’ scent, but not this one.” I found this to hold true. I would highly recommend this book and believe it would benefit anyone who reads it. Bird is a very gifted writer and the pastor who reads this book will find many helpful observations and clever phrases that might be useful in teaching and preaching on forgiveness and grace.

Bird described his ideal audience for this book as, “someone who’s tasted the bitterness of a non-ideal life. Maybe they’re on the other side of a divorce and looking into a black, hopeless future. Maybe they struggle with addiction to pornography, alcohol, or drugs. Or maybe they too have had an affair. Whatever it is, the ideal reader knows what it’s like not to want to look in the mirror, for all they see is a failure” (Eerdman’s blog). This would also be a good book for pastors and church leaders who are working with public ministers and church leaders who fall into sin and disgrace. Synod leaders, district presidents, circuit pastors, ministerial education teachers and administrators – all would do well to read this short volume that will help them shepherd men and women who have fallen in life and in ministry, while guarding them from doing the same.

We are a synod that preaches unconditional and reckless grace. This book is a reminder to let that grace shine brightly for those who have fallen publicly and fallen hard. In doing so we will remind our fellow sinner-saints that they have a God who takes, as Luther said, “that which is nothing, worthless, despised, wretched, and dead, [and] makes that which is something, precious, honorable, blessed, and living” (30).

Night Driving – Notes from a Prodigal Soul, by Chad Bird. Grand Rapids: William B. Eerdmans Publishing Company, 2017. 148 pages. Available in audiobook on Audible and in e-book on Kindle.

PreviousLord, What Should We Do?
Next ﻿Hmong Outreach in Vietnam