On Interpreting Sacred Scripture and Method of Theological Study 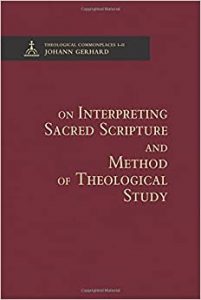 In this short work of about 50 pages, Gerhard lays out arguments for the canon, the inspiration and inerrancy of Scripture, and Scripture as the norm in all controversies.  As one would expect, Gerhard both regularly quotes Scripture and uses Scripture as the basis for his arguments.  Gerhard insists that Scripture’s authority is derived from Scripture itself since it is the inspired Word of God.  This argument, Gerhard points out, only works for those who are already Christians; unbelievers will have to be given other proofs (10-13).  “For though the Holy Spirit is the chief and supreme witness, this is not where one should start in the conversation of such people; that is to say, they should not be told just to wait until the Holy Spirit, apart from means, testifies of Scripture’s authority in their hearts.  Rather, they should be brought to the witness of the church, which in this respect serves the role of a teacher for the pagan student” (11).

Gerhard also displays his deep knowledge of the early Church Fathers. He regularly quotes them to prove that the early Christian Church taught the same truths of Scripture that came to light again during the Reformation.  Gerhard gets polemical, frequently quoting and then refuting a number of Roman Catholic theologians.  His favorite opponent is Robert Bellarmine (1542-1621).

In this second commonplace, closely related to the first, Gerhard gives advice on what to do when something in Scripture is obscure:  “The obscurity of certain passages of Scripture drives us to pray more fervently, increases our eagerness for study, removes our aversion, commends the truth all the more, represses our arrogance, keeps its knowledge away from the wicked, and increases our reverence for the divinely instituted ministry” (55).  For Gerhard, along with other confessional Lutherans, the key to interpreting Scripture is not to elevate one’s own personal understanding, but instead to elevate the inspired Word of God (56).  This stands in stark contrast to the Roman Catholic Church, which ascribes the interpretation of Scripture to the church, namely, the pope.

Once again, Gerhard shows his tremendous knowledge of the Roman Catholic position with multiple quotations throughout this commonplace.  In this section his favorite opponent is Thomas Stapleton (1535-1598).  The Roman Catholic Church has four different means for interpreting Scripture: 1. The rule of faith, 2. The practice of the church, 3. The consenting interpretation of the father, and 4. The prescripts and decrees of the councils (76-79).  Gerhard responds, “Therefore just as the Church of Rome subjects the authority of the fathers to the Pope, all the more do we rightly subject their authority to Scripture” (80).

Gerhard regularly returns to the idea of the “rule of faith” (72).  Gerhard is referring to a summary of the Christian doctrine as gathered from the clearest passages of Scripture.  We may not always know the one correct interpretation of a challenging passage but we must not contradict the rule of faith when attempting to interpret them.  Gerhard explains, “Therefore one should be careful when interpreting the more obscure passages not to say anything that conflicts with the constant and eternal meaning that is contained in Scripture with the clear words regarding each and every main point of heavenly doctrine”  (72).

Gerhard also examines and refutes the teachings of Calvinists when it comes to the Lord’s Supper.  Since there is nothing in Scripture that indicates that the words of institution should be taken figuratively, the rule of faith must be accepted in its entirety.  Scripture says that Christ’s body is a human body and that Christ’s body is distributed in the Lord’s Supper, therefore both must be believed (102).  From here Gerhard moves on to the discussion of the use of reason and logic when it comes to theology.  He warns, “Human reason must not be allowed to pass judgment about a true contradiction in the articles of faith.  Otherwise reason becomes the master of Scripture even though it is not a suitable rule for gaining a correct knowledge of the will and power of God” (108).

Gerhard also gets into the topic of allegory—of which he is more favorable than many WELS pastors might be today.  “Usefulness encourages the use of allegories when the words themselves, taken grammatically, do not seem to offer any useful doctrine or instruction, or even if one does present itself but would be much richer combined with an allegorical interpretation” (98).

This work started out as a series of lectures Gerhard gave to his students while he was a professor at the University of Jena.  It consists of three parts: 1. General Requirements for theological study, 2. Study that must take place before taking up the study of theology, 3. The actual course of theological study.  Readers of Shepherd’s Study will recognize that much of what Gerhard suggests still serves as the basis for the training of WELS pastors today.

In the first part Gerhard takes up Luther’s oratio.  Some of what Gerhard says about prayer would make us uncomfortable: “But now, the Scriptures cannot be translated into works except through God’s grace and the working of the Holy Spirit, which have no place in us apart from prayer.  The streams of divine grace do not flow down to us except through the channels of faithful prayer” (143).  In context Gerhard is talking about believers praying for a stronger faith—an important thing to do..  However, what isn’t clear in this discussion is that the Lord answers such prayers only through the means of grace.

Gerhard also goes into detail on the importance of studying God’s Word in its original languages: “Knowledge of Hebrew is necessary for the theologian so that he can enter the very sources of the Old Testament, investigate the peculiarities and emphases of its word, diligently examine teachings that are very often hiding in a single word, more soundly explain the text, and more accurately refute his opponents” (152).

Gerhard moves on to the discussion of the use of philosophy for the theologian.  He is quick to point out the limitations of philosophy and puts strict parameters on its use.  Channeling Luther, Gerhard warns of the problems that arise when philosophy does not remain the handmaiden of Scripture (170).  So why use philosophy at all?  One reason is that the study of philosophy “stirs, sharpens, prepares, and perfects one’s mind so that he can progress more quickly in studying any of the high disciplines and with less effort” (164).  Gerhard also sees a great benefit in studying philosophy since some will use philosophical arguments against the truth of Scripture.  For example, the Calvinists deny the real presence in the sacrament, in part based on philosophical arguments (177).  The reader must decide to what extent to follow Gerhard’s journey into the study of philosophy as a necessary prerequisite for the study of theology.

In the third part of this work, Gerhard puts forth his plan of the actual course of theological study (meditation).  Gerhard promotes five years of study, with each year building on the study of the previous year.  Much will be familiar to the graduates of our beloved seminary.  A few things to note: Gerhard strongly encourages in the second year of study the practice of debating with other students in a formal setting.  Gerhard sets many parameters for such disputations (191-198). Interestingly, Gerhard suggests students wait until the fourth year of study to first take up the practice of preaching  (201-210).

Finally, in a short epilogue, Gerhard takes up Luther’s tentatio, which he says takes place throughout one’s course of study and life in the Word  (239).

Much of what Gerhard writes is not going to be particularly enlightening, new, or earth-shattering for Confessional Lutheran pastors.  However, all who read this book will be grateful for Gerhard’s clear, precise, and organized presentation of the truth and his staunchly confessional approach.  Readers will appreciate his extensive use of the Scripture, his knowledge of the Church Fathers, and his unyielding attacks against false teaching.  If you are in need of a book that portrays the Lutheran position on Scripture and how it is interpreted, or if one is looking for insight on how to gain theological knowledge, this book is highly recommended.  The retail price of $59.99 per volume might be a deterrent for some.  However, a subscription price of $41.99 per volume is also offered.  If this volume and Gerhard’s reputation are any indication, the other volumes of this series will certainly be worth the price.

[1]  Do not confuse this first commonplace with Gerhard’s more extensive Exegesis commonplace On Holy Scripture, written in 1625.