On the Road with Augustine

On the Road with Augustine

Kindle or Paperback or Hardcover 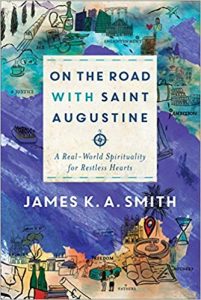 James K.A. Smith (PhD, Villanova University) is a professor of philosophy at Calvin University, where he holds the Gary and Henrietta Byker Chair in Applied Reformed Theology and Worldview. He is also a popular speaker and author who has won awards from Christianity Today for his books: You Are What You Love, Desiring the Kingdom, and Who’s Afraid of Postmodernism. He is currently the editor in chief of Image journal.

What is this book about?

Have you ever met someone who is so much like you that it seems they have been living a parallel life? Even though you had never met this person before, they have read the same books, listened to the same bands, loved the same movies, and are kept awake at night by the same curious questions as you are. It’s like this person has thought your thoughts before you and will continue to think your thoughts after you.

In On the Road with Augustine, James Smith invites his readers to meet the bishop of Hippo. Smith explains, “This is not a biography. This is not a book about Augustine. In a way, it’s a book Augustine has written about you. It’s a journey with Augustine as a journey into oneself. It’s a travelogue of the heart. It’s a road trip with a prodigal who’s already been where you think you need to go” (xi). How does this ancient church father know you so well? Smith answers, “It’s not because he’s some guru, some Freudian analyst who haughtily sees through you. He only knows you because he’s been there, because he has a sense of the solidarity of the human race in our foibles and frustrations and failed pursuits” (xi). Augustine knows you, and he knows modern man, because he knows the human condition and how God has wired us. He knows, as he says, that our hearts will not be at rest until they rest in God. As Smith says, “The goal isn’t returning home but being welcomed home in a place you weren’t born, arriving in a strange land and being told, ‘You belong here’” (44). Surprisingly, rest isn’t found in searching, but in being found.

After providing a brief overview of Augustine’s journey from the time he was a brilliant young rhetorician running away from his helicopter mom to his tenure as the esteemed bishop of Hippo, Smith invites his readers to travel with Augustine to explore some of the thematic detours he took on his journey to Christian self-knowledge. The reader is taken on breathtaking mountain roads to explore topics like freedom, ambition, justice, and death, and onto less traveled roads to ponder the significance of mothers and fathers, friendship, and even sex.

Will this book be helpful to me?

Yes. This book will not only be helpful and encouraging for you in your personal faith life, but it will also provide you with many insights to share with your members and as you reach out to doubters and skeptics. When it comes to the latter, Smith argues that Augustine might even “make Christianity plausible again for those who’ve been burned—who suspect that the ‘Christianity’ they’ve seen is just a cover for power plays and self-interest, or a tired moralism that seems angry all the time, or a version of middle-class comfort too often confused with the so-called American Dream” (xiii). At risk of using a word that has been worn out by contemporary Christianity, Augustine was authentic. Just read his Confessions again and you will see that like the Apostle Paul, Augustine came to understand that the Christian life was not some Osteen-ized version of your ‘best life now,’ but it is a daily struggle against the flesh which is enveloped by God’s grace.

In addition, there are more than a few illustrations and quotes that could serve as good sermon material. Here’s a sample that represents the wide-range of topics covered in this book:

In idolatry we are enjoying what we’re supposed to be using. We are treating as ultimate what is only penultimate; we are heaping infinite, immortal expectations on created things that will pass away; we are settling on some aspect of the creation rather than being referred through it to its Creator. Augustine describes this by using the metaphor of a journey: disordered love is like falling in love with the boat rather than the destination. The problem is that the boat won’t last forever and is going to start to feel claustrophobic. Your heart is built for another shore. (82)

If you ask him, “Are you doing this for God or for your own vanity?” Augustine’s answer is an honest “yes.” Indeed, you can feel him constantly asking himself, “Just why am I writing these Confessions? What am I hoping for? Whose attention am I seeking?” If he were alive today, he’d admit all the time he spends posting on Instagram about his upcoming book on humility. But he’d risk it, confident not in his own purity but in the grace of a God who can use his best efforts in spite of his motives. (91)

On Augustine’s Relationship with Scripture

For the rest of his life, Augustine, like a hip-hop bricoleur, “samples” Scripture in everything he says. The psalms, especially, are always on the tip of his tongue, a storehouse of metaphors and comfort. It’s incredible how quickly the Scriptures became Augustine’s first language, so to speak. The Scriptures are the heart of Augustine’s lexicon because the cosmic story of redemption is his governing story. (168-169)

Augustine’s Self-Consolation on the death of his friend, Nabridius

Instead, he is hidden with Christ in God where he “puts his spiritual mouth to your fountain and avidly drinks as much as he can of wisdom, happy without end.” Then Augustine allows himself a happy, consoling thought: “I do not think him so intoxicated by that as to forget me, since you, Lord, whom he drinks, are mindful of us.” I miss our conversations, Augustine says, and I take comfort in the thought that Nebridius remembers them too, and is eager to pick up where we left off. (217)

On the Road with Augustine is a rewarding journey through historical, theological, philosophical, and theological lands. If you are looking to stay in a single city and meticulously uncover every aspect of its culture and history (a detailed biography on Augustine), this might not be the book for you. But if you are looking for a road trip through the most interesting parts of a country and hoping to get a taste of each region – with Augustine leading the way and Smith navigating, this is the trip for you.