People to be Loved

People to Be Loved: Why Homosexuality Is Not Just an Issue 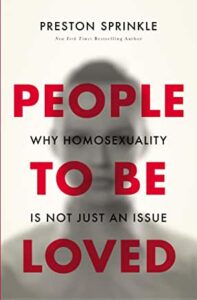 The subtitle of Preston Sprinkle’s People to be Loved highlights his purpose for writing: “More than just an issue.” It’s not immediately apparent what Sprinkle means by that, but as you read the book, the author’s thesis becomes crystal clear: homosexuality is not just an issue, or a talking point, or a debate; it’s about people. Any discussion of the “issue” or “phenomenon” of homosexuality is sorely lacking if it’s divorced from the fact that there are genuine people whose lives are affected by their sexual orientation. Sprinkle constantly reiterates and reinforces these basic Christian truths and their only logical and loving conclusion: our Christ came to this earth to love sinful people like us. And we Christians are, in turn, called to love sinful people. Therefore, we need to see people in the LGBT+ community primarily as people to be loved. While he does talk in great detail about the “issue” on a theological level, he attaches the entire discussion to names, faces, and stories of people along the way.

Chapter 1 is strongly titled “My name was faggot.” Sprinkle opens with a stark story about a gay man who committed suicide in no small part because the loveless words and attitudes of Christians served to push him toward taking his own life rather than have him find love in the arms of his Savior. This introductory chapter serves as a microcosm for the whole book. It is a strong call to the church to love, rather than increase the pain of, those who experience same-sex attraction.

Sprinkle speaks to both what he calls the “affirming” and “non-affirming” camps of Christianity, which is the language that he uses throughout the book. He strives to assume the posture of someone coming at this topic without preconceived notions. He wants to avoid being the gentleman he met on a plane who parroted “The Bible is very clear on homosexuality” without the ability to articulate the point at all.

Chapters 2 through 7 are where Sprinkle does the most digging into the Bible’s words and meaning as it pertains to homosexuality. As men who are trained in the four major branches of Christian theology, our pastorate will appreciate Sprinkle’s approach. This section is thoughtfully exegetical, builds a systematic argument, and remains firmly grounded in historical-grammatical interpretation of Scripture. All the while, he speaks with a pastor’s heart.

He first asks if sexual difference is a universal requirement for marriage, focusing primarily on the phrase “helper suitable” to build his case rather than “one flesh.” He also notes how Jesus cites Genesis 1:27, “He made them male and female” when defending God’s will for marriage. This chapter doesn’t end the debate, by Sprinkle’s own admission, but it certainly is a good start.

In chapters 3, 6, and 7, Sprinkle examines the so-called “clobber passages”—in other words, the six passages that many Christians have used to clobber gay people. He starts with Genesis 19, arguing that it is unfairly simplistic to limit “the sin of Sodom” to homosexuality alone, and that there are many other sins at play in the narrative such as inhospitality and attempted rape. He moves to Leviticus 18:22 and 20:13 and their various (mis)interpretations. While Sprinkle does a good job looking at these Leviticus passages honestly and defending against those that try to limit their scope, I think this is also the section where he engages in his weakest argumentation. He spends a lot of time discussing which Old Testament laws “still apply” or “no longer apply” today, and most of his points could easily open him up to criticisms of cherry-picking or confirmation bias.

Chapter 4 serves as a useful review for the historical context of Judaism’s and Greco-Roman culture’s views on homosexuality. The second half of the chapter is particularly helpful, where Sprinkle examines the Jewish mindset toward homosexuality to help us interpret Jesus’ apparent silence on the matter.

The most valuable chapter to me was chapter 5, “Whom would Jesus love?” A common argument from the “affirming” Christian crowd is that Jesus never mentions homosexuality, let alone condemns it explicitly. Sprinkle reminds us that “in sexual matters that were debated within Judaism, Jesus takes a stricter stance and not a more lenient one” (74). The chapter contains that challenge to the affirming crowd, but he also has a challenge for the non-affirming crowd (that’s us): aspire to the radical love of the Savior for the marginalized and the outcast, and not let “gay” be “the new tax collector” (77).

Returning to the “clobber passages,” Sprinkle then treats Romans 1. His evaluation is that the chapter does condemn same-sex relations, but he notes that these words have been used in very unloving ways. He also reminds us that everyone in the world is condemned by Paul’s law in Romans 1, so to limit this passage to just verse 27 isn’t treating it fully. This section is also useful for us to familiarize ourselves with the counterarguments of the affirming camp. “It’s not about being affirming or non-affirming; it’s about being biblical” (90). This chapter also helpfully reminded me that the “abomination” of Leviticus 18/20 is the male-male sex act, not gay or lesbian people themselves. Chapter 7 then gets into the hot-button Greek words malakoi and arsenokoites. This chapter will not be earth-shattering to pastoral exegetes, but it will help build our understanding of these passages, deal with them pastorally, and be accurate with our translation—while homosexuality is certainly the topic at hand, NASB’s rendering these words as “homosexuals” just does not present a complete picture of Paul’s meaning.

The last three chapters present a special pastoral focus. Sprinkle asks key questions like “Does God make people gay?”, “Can someone be both gay and Christian?”, and “So what is a gay Christian to do?” When discussing nature vs. nurture, Sprinkle notes that people on both sides of the issue have granted that it’s not that simple: “‘Is it a sin?’ and ‘Does it have biological roots?’ are two completely separate questions” (131). He explores the meaning of the word ‘gay’ itself—must it always refer to the sex act, or is there more to it? (Spoiler: there’s more to it.) Chapter 10 gives three options to those experiencing same-sex attraction: reparative therapy (only useful if the person requests it themselves; almost certainly a failure if forced upon them), mixed-orientation marriage (a gay man married to a straight woman; obviously, not for the faint of heart), and celibacy. This chapter also includes timely reminders for the church not to treat celibacy as a curse or a deficiency, but as a holy calling a la 1 Corinthians 7.

“I am not calling on the church to give up its convictions. I am calling on the church to change its posture, to be convicted about Christ’s stubborn one-way love that he called us to mediate to others” (85). That word “posture” is what I appreciate most about Sprinkle’s book. His posture throughout the writing is that of someone seeking to understand, seeking to help, seeking to love, and seeking to stand on the truth of God’s Word. Even if you don’t reach all the same conclusions as the author, I think anyone reading this Shepherd’s Study review will appreciate and seek to emulate Preston Sprinkle’s heart.

He also reminds us that people are not always being disingenuous when they conclude that the Bible allows for an affirming stance on homosexuality. They may be misinterpreting, or being misled, but it’s unfair to assume that everyone in the affirming camp is acting in bad faith. The disagreement should be the start of a conversation, not the end. That tone is evident here, and I deeply appreciated it as a reader who is eager to further learn how to speak the truth in love on this topic.

The subtitle rings true: homosexuality is not just an issue; it’s people. More than that, it very well may be the people in your pews—or people near and dear to their hearts. We pastors owe it to our sheep to be both well-informed and humble when we approach this topic. Sprinkle ends the book with a series of challenges, but the challenges can mostly be summarized with one word: listen. Be ready to listen.

If this review piqued your interest, I urge you to read the whole thing and not just take my summary at face value. Preston Sprinkle’s case is worth hearing out in full; I almost feel like summarizing it in this way is doing it a disservice. This book will be of use in any pastor’s library. It could also be comprehensible and beneficial for laypeople who are willing to roll their sleeves up and get into it a bit. I can imagine a scenario where I would buy this book and gift it to someone who is asking these questions—whether about their own life, or that of a loved one.

PreviousPsalm 66
Next Graduation and Call Day May 2022