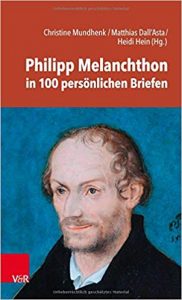 (Disclaimer: This volume is in German. This reviewer did not read all the letters, but instead tried to read a wide variety of the letters to get the broad scope of the book. The German-spelling for names is retained in this review.)

Did Philipp Melanchthon think his letters would have been preserved and read almost 500 years after he first wrote them? Maybe not. However the Melanchthon Research Center’s goal is to catalog into one complete edition Philipp Melanchthon’s correspondence. The collection totals about 9,750 pieces. This book offers just 100 of those pieces of correspondence. The letters in this book are arranged chronologically. After the letters, there is a simple chronology of Melanchthon’s life and the events of the Reformation during his lifetime. A few of the 100 letters were originally written in German. However since the majority were written in Latin (a few in Greek), the editors translated those letters into German. To give an idea of the content of these 100 letters, a few snippets of the letters are translated below into English. The first items come from a letter written right before the Diet of Augsburg. It is interesting to see the personal side of the men involved in that monumental time in Lutheran history. These give a little glimpse into what else was going on in their lives before the Diet of Augsburg. The next letter (Letter 100) offers clues to Melanchthon’s mindset at the end of his life. In this letter are the reflections of a man’s life, who had in so many ways helped and hurt the first generation of Lutherans.

I found this book very intriguing as to its selection of letters. These letters are addressed to a range of people: kings, princes, Reformers, students, family, and friends. There are not only letters to more famous people from this time, such as to Erasmus (letters 11, 12) and to Martin Luther (e.g. letters 17, 18), but one also finds more intimate, personal letters to Melanchthon’s grand-uncle, the Hebraist Johann Reuchlin (letters 2, 3) and to Melanchthon’s nephew, Sigismund Melanchthon (letter 92). The variety of topics contained in the letters is also intriguing and just as valid as if they had been written today: weddings, sicknesses, trials, death, and heaven. This diversity of letters offers a broad view of Philipp Melanchthon. That broad view is a strength of this book.

Melanchthon is often remembered as the author of the Loci Communes, the Augsburg Confession, the Apology, and Treatise on the Power and Primacy of the Pope. He is also known as the Praeceptor Germaniae, “teacher of Germany.” He is infamous for the controversies from his later life and even after his death. These letters however give the reader a slightly different look into the person and character of Melanchthon. Before reading this book, this reviewer only had the profile of the man from Reformation history books. This book offers information about what was going on in Melanchthon’s life between and behind those well-known events. In doing that, it offers a fuller picture of Philipp Melanchthon, the husband, father, friend, scholar, counselor, and the list goes on. Like every Christian, Melanchthon was a complicated saint and sinner.

To finish up, this reviewer asks: how much can you learn about a man who lived 500 years ago? What things would you read to get a better picture of his life and thoughts? Perhaps his letters would be a good source. This book helps to give that broader, fuller, and more charitable profile of Melanchthon. It is a beneficial read and recommended for those who have some ability in German and who wish to have that profile of this man.