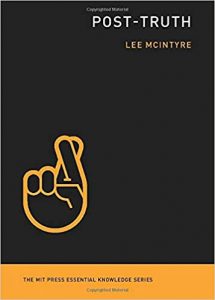 Lee McIntyre serves as an instructor in Ethics at Harvard Extension School and is a Research Fellow at the Center for Philosophy and History of Science at Boston University.  His degrees include a B.A. in philosophy of social science from Wesleyan University and an M.A. and Ph.D. in philosophy from the University of Michigan.

In this short and interesting read, Lee McIntyre depicts the death of objective fact that creates the world in which we now live, the world of “post-truth.”

The term “post-modern” is now somewhat passé in academic circles, and yet the author admits that “postmodernism is the godfather of post-truth” (p. 150). This is not a shocking statement as the world has been on a slippery slope of gutting the very definition of “truth” for some time now. Yet, McIntyre writes with passion, the earnestness of someone who is watching a (societal) train wreck happening in slow motion.

But what is “post-truth” and how did we arrive here? The author defines “post-truth” as “a form of ideological supremacy, whereby its practitioners are trying to compel someone to believe in something whether there is good evidence for it or not” (p.12). In other words, post-truth refers to a situation where ideology trumps fact. Thus, regardless of what facts exist, in the post-truth world facts don’t matter; allegiance to a certain ideology is what’s important. We have the ability in our world to listen to only those narratives that we agree with, a situation psychologists call “motivated reasoning.” Or to quote Orwell (as he often does), “People can foresee the future only when it coincides with their own wishes, and the most grossly obvious facts can be ignored when they are unwelcome (p.35).”

The author then traces a fascinating story of how, in essence, the academic world of the late 20th century actually laid the foundations of the current post-truth world when ivory tower scholars began to assail the reliability of scientific “evidence.” It was philosophers and sociologists who began to plant the idea that the scientific method itself was deeply flawed, and that alleged “facts” could be open to various interpretations.

How ironic! But the author, with regret, admits that once the cat was let out of the bag, this mentality seeped into many facets of popular society. One of them into which it seeped was the news industry. It began with 60 Minutes, the first news show to turn a profit. Once news corporations realized they could actually make money off the news, the market exploded with competition. And one of the ways in which major news networks began to compete was to offer a “point-counterpoint” style of debate, a “one view vs. an alternate view” (what we today call “balanced” reporting). But, in the author’s opinion, what this did to the national psyche was this: it created an atmosphere where there are, in essence, really no facts pinning down arguments but only “viewpoints” (perspectivism) or various interpretation of facts (or “an alternate set of facts,” as one current White House representative put it). Thus was born, “we report, you decide.”

Pastors might also be interested in reading this little book for the author’s perspective on how the entire “intelligent design” or “creationism” apologetic stole a page out of the academic playbook. As McIntyre recounts how academia began to attack the scientific community in the 1990s, he notes this is essentially what intelligent design proponents are doing in our current world. The plan is to undermine the credibility of scientific research or to cause doubts to rise in the popular mind about the motives of scientists or the bias that must be inherent in their findings. Not only does he disparage the situation with respect to the evolution vs. creation argument, but especially (as he asserts) the undeniable facts supporting climate change. Yet, as earlier stated, McIntyre admits that the current situation is basically academia’s own fault.

The book ends on an interesting note: the author speaks about how we may be now entering an era of “pre-truth.” To support his point he quotes our current president (as he frequently does in this book) who has stated, “I’m a very instinctual person, but my instinct turns out to be right.” Thus we are back to Plato and Aristotle, the first debaters on the source of knowledge, whether it is a priori or a posteriori. McIntyre does sound the warning that if all of society decides to simply “go with my gut,” what room at all is there for truth and fact in such a world?

The book, as I said, is a relatively quick and engaging read. Technically, it is a philosophy text. But I feel (…oops, my apologies) I assert that it is good for pastors to keep abreast of such trends in society so that we can all the better be prepared for this battle over “truth.” What a miracle of God’s grace that we believe and confess his Word to be so, and what a privilege for us to spend our days as students and servants of God’s truth.