Power, Politics, and the Missouri Synod: A Conflict that Changed American Christianity

Power, Politics, and the Missouri Synod 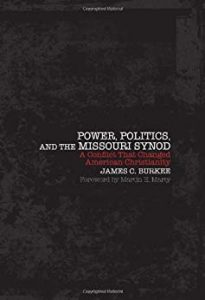 James C. Burkee is Associate Professor of History at Concordia University, Wisconsin, where he teaches modern American political and religious history. He is a frequent contributor to national newspapers on political and historical matters, including USA Today, the Los Angeles Times, the San Francisco Chronicle, The Hill, and the Milwaukee Journal Sentinel.

In Power, Politics, and the Missouri Synod, James Burkee attempts to shed additional light on a conflict that raged within the Missouri Synod. This conflict changed the landscape of Lutheranism, but was little known among Missouri’s own members (xiv-xv).

Most Wisconsin Synod Lutherans recognize Missouri’s departure from long-held confessional Lutheran beliefs as a primary cause for the suspension of fellowship. Burkee suggests that theology was not the only motivating factor for Missouri’s lean to the left. The “schismatic history of the Lutheran Church—Missouri Synod (LCMS) is about more than just theology… it was also about the cultural and political contexts in which these men lived” (4-5).

As the Missouri Synod grew, it needed improved framework for its ministry. Burkee notes tremendous growth in synod bureaucracy, as well as a dramatic increase in new ministries. In order to meet the changing needs of the synod, Missouri’s top theologians advanced their education at universities outside their synod (23). As a result, its theologians returned home “more theologically modernist and politically liberal” (24).

Finally, Burkee notes, between 1964 and 1967 eighteen liberal-leaning clergymen accepted professorships at Concordia Seminary, Saint Louis (53). Their liberal theological and political viewpoints manifested in their teaching at Concordia Seminary. Soon seminary professors openly challenged and rejected long-held Lutheran beliefs, such as that of biblical inerrancy, and advanced the notion of biblical discrepancies.

The Missouri Synod did not shift entirely left. Hermann Otten rose as a leader of the conservative faction. As a seminary student, he openly criticized liberal professors (31). He also founded the newspaper Christian News in order to disclose the growing liberalism occurring within the Missouri Synod.

In chapter 2 Burkee details the conservative countermovement to the increasing liberalism within the Missouri Synod.

A serious schism had formed within the Missouri Synod by the 1965 Detroit synodical convention. Delegates, swayed by liberalism, affirmed that the Missouri Synod could be “both theologically conservative and socially active, conservative and evangelical, traditional yet ecumenical” (66). Conservatives responded by publishing tracts to educate the laity regarding the liberal movement occurring within the Missouri Synod. Liberals touted an “intellectual elitism” over laity (70). The laity responded with  “grave doubts about how authority has been used” and began to “assert their own influence” (72).

Burkee outlines the rise of several independent conservative groups within the synod. Three district presidents united to form a conservative response known as “Faith Forward—First Concerns” (74). Otten’s Christian News continued calling conservatives to unite and fight liberalism’s creep within the Missouri Synod (76). Several other conservative laymen and clergy soon joined the foray (79). The challenge, Burkee notes, was that “so many of the conservatives had their own beefs, agendas, and strategies. The diversity among conservatives was great and threatened to kill the movement from day one” (87).

For the moment, conservatives united behind one candidate for the synodical presidency: Jack A. O. Preus. The 1969 synodical convention in Denver “had all the trappings of a modern, secular political campaign” (90). Liberals defended the incumbent Oliver Harms. Conservatives nominated and supported Preus. Preus won election on a narrow vote.

Chapter 3 details the use of power within the conservative movement. Preus may have won the election, but conservatives had not coalesced. As a result, infighting erupted over the following the decades.

Burkee claims “Preus was a pure politician in the sense that unswerving commitment to ideological purity often took a backseat to political interest and long-range pragmatism” (102). Preus’ politicizing, Burkee notes, resulted in Preus becoming well-known for his “duplicity” (110). He often agreed to a certain issue with conservative leaders, but then passed along the opposite viewpoint on the issue to another party, while later returning to conservatism’s leaders, claiming he did the best he could (101).

Already by 1970, Preus sought an investigation into liberalism at Concordia Seminary, Saint Louis. A liberal faction of professors, clergy, and laymen issued and circulated a document which “put into black and white… a rejection of the synod’s traditional doctrine of biblical inerrancy and infallibility” (111). Preus would later use the 1973 New Orleans synodical convention to trap the liberal president of Concordia Seminary,  John Tietjen, in admission of false doctrine (121).

Chapter 4 serves as an epilogue of sorts. Twenty-four pages detail the final act for most of the main figures during this conflict.

After Seminex, the liberals eventually left the Missouri Synod. Its leaders expected 2.7 million members and 6,000 congregations to join them. Only 250 congregations consisting of 100,000 members joined (153).

The battle over Concordia Seminary, Saint Louis had fizzled to an end. The conservative movement had still not yet coalesced. Burkee lists the many once-prominent leaders who either stepped down from influential positions or formed new church bodies (such as the Federation for Authentic Lutheranism [FAL]) (157). Preus distanced himself from Otten entirely, portraying Otten as a fringe writer (169).

Before the 1981 synodical convention, conservatives met for the purpose of supporting a nominee for synod president. However, the conservative movement still “bickered over whom to support at the next convention” (175). By meeting’s end the majority had spoken: Preus was no longer needed. Burkee claims, “For Missouri conservatism to thrive, it needed an enemy. Before the Harms era, the enemy had been everyone who was not of the Missouri Synod. But by the 1960s it included moderates and Harms himself. With moderates defeated and exiled, conservatives had the synod in their hands, but they still needed heretics to hunt and a church to purify, the only rationale for their organized existence” (179).

Power, Politics, and the Missouri Synod relies heavily on quotations and interviews. Burkee even makes “no claims to impartiality” (14). One wonders if his “impartiality” bleeds through in some portions.

In describing Missouri’s early departure from Scripture, Burkee claims that Martin Franzmann could cite no passages for biblical inerrancy (45). He fails to cite his source for such a claim.

In other places, Burkee plainly states that Preus was a “politician” (9-10). Executing biblical discipline can appear to be “politicizing.” For example, a pastor cannot divulge confidential matters to his church council. He speaks in general terms in order to spare reputations. Only after matters have reached the need for more witnesses may he then tell it to the church. Was Preus privately working with erring parties in the hopes of turning them to repentance? Did erring clergy mislead Preus without him knowing? Were conservatives demanding too much, leading as dictators instead of compromisers? According to Burkee, Preus stood in the wrong. It would be interesting to study this controversy through the eyes, mind, and heart of Preus.

This reviewer appreciated the mind-provoking thought raised in the book’s closing sentence. In his final interview, Otten admitted that a lasting regret was the failure to produce a clergyman from among his own children. Perhaps his fighting had soured his children’s view of the ministry. Burkee wonders how many within and outside of the Missouri Synod felt the same (183).

At first, this note seems to veer off course from Burkee’s main premise. Upon closer study, his statement is not really all that far off. If a ministry is run primarily through political tactics instead of theological application, souls will be hurt. The kingdom of God does not advance by the sword, and therefore, does not spread through the use of politics. No matter how innocent Missouri’s politicking might have first appeared, it nevertheless brought great division that still permeates much of the synod. Even Preus admitted as much (182).

Power, Politics, and the Missouri Synod offers some practical use for pastors, teachers, and laity. After all, its primary focus is to inform. The benefits of this book do not necessarily come from what is said, but rather what is left unsaid. Much of Missouri’s conflict came as a result of preferring procedures over Scripture. Had church discipline (as outlined in Matthew 18:15-18) been followed, perhaps the conflict would have concluded sooner rather than later. Perhaps the theological course of the synod could be clearer. This book demonstrates the tragic result when Scripture is only vaguely applied and when backroom deals, back-biting, and personal desires take precedence.

The strengths of Power, Politics, and the Missouri Synod also are its weaknesses. On the one hand, the book presents concise history, offering four chapters with 50 subchapters for quick reference. However, this makes slow reading for the historical enthusiast. The book cites numerous primary sources (approximately 960 endnotes), lists about 40 names of liberal and conservative leaders, and four major synodical periodicals. However, endless endnotes, as well as recalling the “who’s who” and “what’s what” make for slow reading.

This book serves well for anyone (pastor, teacher, staff minister, or layman) researching the conservative efforts in preserving the theological course of the Missouri Synod. Christians who continue clinging to God’s Word will grow to better appreciate preserving its truths, using the Word to correct and rebuke error, and to continue teaching all nations the grace of our God.

PreviousLord, Make Me More Like the Unbelievers!
Next 2019 Dialogue Education Conference Held