Reading the Book of Revelation

Reading the Book of Revelation: Five Principles for Interpretation 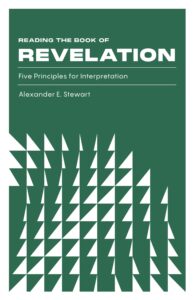 “Let’s face it: the book of Revelation is difficult to read. Many neglect it, leaving it to the experts or the obsessed. Others fixate on the details, focusing on current events but missing Christ in the process” (Back cover).

Pastors often share that the most requested Bible study is on the book of Revelation. Maybe this is because it is difficult and people want help understanding it, or maybe this is because people want to fixate on the details and focus on current events. Either way, the pastor must make a decision: Am I going to explain this whole thing (again!)? Or am I going to steer my members away to a book that is more simple for now?

Alexander Stewart, professor of New Testament studies at Gateway Seminary, provides another option: Teach the principles necessary for understanding the book of Revelation, and then they won’t need you to explain every verse and every detail. In the first half of his book, Stewart presents five principles for interpreting the book, and in the second half he presents a short overview of Revelation, chapter-by-chapter, showing how to put the principles into practice.

The first principle is: Focus on the original purpose of the visions.

“Revelation is neither a complicated book of doctrine nor a detailed timetable of future events…. Revelation is primarily a book of motivation” (9-10). Stewart points out the inclusio of Revelation 1:3 and 22:7, showing this main purpose.

“Blessed is the one who reads aloud the words of this prophecy, and blessed are those who hear, and who keep what is written in it, for the time is near” (Rev 1:3).

“Behold, I am coming soon. Blessed is the one who keeps the words of the prophecy of this book” (Rev 22:7).

Stewart breaks down this keeping of the prophecies into themes of repentance, perseverance, obedience, witness, and worship (14). “The book’s primary goal is to motivate hearers to overcome. We overcome through genuine repentance, perseverance, obedience, witness, and worship” (15). I think it would be easier to simplify that to: “John’s goal is to motivate hearers to overcome through faith, which expresses itself in those themes.” Either way, keeping the original purpose of the book in mind is the most helpful principle for understanding Revelation. When someone asks, “What are the locusts?” You can answer, “A better question is: Why are the locusts? They are a picture meant to motivate us to hold on to Christ, who protects us from evil.”

The second principle is: Let the original historical context guide your interpretation.

This is a helpful principle for weeding out poor interpretations. “If a proposed interpretation of a particular vision would not have made sense or been intelligible to the original hearers, then it is not likely to be correct” (20). This section includes helpful letters, pictures of coins, and other historical information from John’s time. While Stewart has a slightly different interpretation of the two beasts than Becker, they agree that the beasts express both political and spiritual opposition to Christianity.

The third principle is: Recognize Repetition.

Stewart recognizes that the “sevens” in Revelation “cover the same time periods, events, and themes from various perspectives and with different degrees of detail” (33). He includes several helpful charts comparing the visions. For example, to tackle the question, “How many final battles are there?” he compares Rev 11:7, 12:17, 16:14, 17:14, 19:19, and Rev 20:8. Side by side, the similarities jump out and “should suggest not six different eschatological battles or wars but one ongoing conflict that intensifies and culminates with Jesus’ return.” Combined with the first principles, it makes sense that John would describe the final battle multiple times in different ways, in order to motivate his hearers to believe that this battle is real and dangerous and we must endure suffering, believe that God is in control, and yearn in faith for God to come in the end with his final victory (45).

Refreshing in this section is Stewart’s treatment of “3-and-a-half-years,” and the other numbers that add up to it (42 months; 1,260 days; time, times and half a time). Not only does he draw Old Testament connections I hadn’t thought of before (Elijah’s three-and-a-half-year judgment of drought, and the Israelites’ 42 encampments in the wilderness), but he also comes to the same conclusion we are familiar with: “The symbolic three-and-a-half-year period of tribulation began at the point of Jesus’s ascension!” (41) The strong showing of Scripture interpreting Scripture, with many cross references and Old Testament connections, made this my favorite chapter in the book.

The fourth principle is: Recognize symbolism.

Stewart showcases proper humility when he says, “The goal is not to interpret literally, but to understand, as much as we possibly can, the author’s intended meaning” (49). He assumes a symbolic meaning for the visions, finding support for this already in John’s use of sēmainō in Revelation 1:1. John is presenting “signs,” just like the symbolic signs presented in apocalyptic books in the Old Testament and other Jewish apocalyptic literature (50). The most interesting point made in this chapter is that overly interpreting and explaining symbols defeats their purpose:

The apocalyptic genre strikes many readers today as quite strange. We immediately want to decode the visions and provide an explanation for every symbolic detail. We should resist this urge. Some of the details do not have specific meanings but serve as special effects to add vividness to the scene. Many of the symbolic details seek to impact our emotions more than our minds. Try reading Revelation 9 and then a commentary on Revelation 9. The vision by itself is terrifying and incredible emotional. The commentary on the vision, however, is far less likely to impact you emotionally. (56)

The fifth principle is: Read Revelation as Christian Scripture.

Once again, Stewart emphasizes that Scripture interprets Scripture. Revelation was not written in a vacuum. “It is evident John thought his visions were a continuation of the Old Testament. There are particularly strong connections to the books of Ezekiel, Daniel, Isaiah, Psalms, Exodus, and Zechariah” (59). Genesis began in a garden; Revelation finishes in the new garden. The other books of the Bible show the story of God’s people from garden to garden. “Revelation invites us to find ourselves in this story. We are characters in the great conflict. We will experience suffering, but we are promised and incredible future (61).”

A nice point in this chapter is Stewart’s focus on how Revelation helps us understand the relationship between Jesus and God, and how Revelation clearly expresses the truth of the Trinity. Stewart also gives a good foundational question when attempting to enjoy and interpret Revelation in the context of the Bible: “What does this vision teach me about God, Jesus, sin, salvation, and God’s people?” This naturally excludes questions like: “What does this vision teach me about the location of Armageddon near Moscow and how many locust-like helicopters the evil army will have?”

That’s only the first 70 pages! The remainder of this book provides a short commentary, vision-by-vision of the rest of the book. Throughout, Stewart displays how these five principles aid in interpretation, and while he may present some different conclusions than we would reach on particular details, he demonstrates how closely Christians from two different church traditions can agree, even on a book like Revelation, when they begin with proper principles of interpretation.

I would recommend Reading the Book of Revelation: Five Principles for Interpretation for fans of Dr. Siegbert Becker’s Commentary on Revelation or for those looking for something shorter, easy to read, and less technical (almost no Greek). I would also recommend using this book as a basis for a shorter Bible study, preparing participants to read Revelation on their own without fear, so they too can be blessed by keeping the words of this prophecy.