I Am Not Afraid: Demon Possession and Spiritual Warfare

I Am Not Afraid 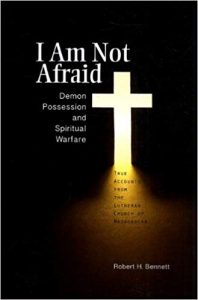 This book offers: TRUE ACCOUNTS FROM THE LUTHERAN CHURCH OF MADAGASCAR. It has two parts; 1. The Malagasy Story, and 2. Exorcism–Teaching from Scripture and The Life of The Church (v-vi). Bennett states: “The universal Church can benefit by learning from the Malagasy Lutheran Church about the realities of the existence of Satan, his activities, and Jesus’ victory over him” (6). This book does frequent criticizing of first-world assumptions about spiritism. After presenting the Madagascar Lutherans’ scriptural approach for confronting animism, Bennett writes: “The Malagasy Lutherans have at the same time refused to accept the enlightenments [sic] denial of spiritual forces, which interact with humanity” (6).

Traditional Madagascar religion venerates razana meaning a long dead, unspecified forebear. “To the Malagasy, the ancestors (razana) play a continual role in their lives by providing blessing or misfortune…” (38). Thus, Madagascar natives do anything to keep razana happy. They build elaborate house-like tombs for the dead while the living dwell in shacks (39). They perform burial and re-burial rites to please ancestral spirits (40). Relatives unwilling to participate “face excommunication from the family both in this life and the next” (41). “[T]hese practices always seek to communicate with the dead, exposing the participants to the demonic activity found in the tromba worship that must accompany such ceremonies. As a result, undesired possession sometimes occurs even to those who profess membership in the Church” (43).

Tromba means ancestral spirit or spirit possession ceremony. Malagasy people associate spirits with ancestors and want spirits to possess them. “By seeking possession people hope to gain the power that the spirits possess. This is accomplished through the healing advice that the tromba spirits provide as well as other secret knowledge that may be gained as a result of their presence” (38). Moving from general Malagasy religion to specific anecdotes, Bennett writes: “[M]any of the people we will encounter in this chapter share lives of deep bondage to both their deceased ancestors and the spirit world, both of which are actually demons in disguise” (54).

The anecdotes range from the unsettling, such as, Bennett himself became nauseated while visiting an animistic worship site (4), to the bizarre, such as a fisherman enslaved in a marriage-like bond to a river spirit who once kept him in her underwater house for a week (63-64). Demons inflict burdens of guilt, bodily threats, strict ritualism, material losses. Virtually all respondents to Bennett’s interviews describe exorcism and conversion in terms like being “freed,” “unchained” (82), and “liberated” (83).

Malagasy Lutheranism distinguishes itself from Roman Catholic exorcism (25) and movie exorcism (44). Whether general or individual exorcism, note well the Malagasy Lutheran difference: Instead of working alone or in pairs, clergy and lay mpiandry exorcise as teams (51). They follow general patterns, not rigid rules (44-52). Their exorcisms correctly use Jesus’ name in a doctrinal sense, emphasizing Lutheran catechesis, not like a magic word (24-25).

“Part Two” argues demon possession and exorcism have been constant throughout Church history. Bennett reviews all biblical accounts of Jesus or his apostles covering demonic expulsion (99-128). He references Reformation history, pertinent parts of the Lutheran Confessions (129-134), and Luther’s own letters about demonic activity (135-144) and his baptismal rites with exorcism (144-147).

In post-Reformation times, names like Baier, Quenstedt, Balduin, and Fecht all suggested demons could even possess Christians (151). Bennett mentions these and others while surveying C.F.W. Walther, who himself gave pastoral pointers about identifying demonic possession (150). Bennett concludes his historical overview with names of more recent theologians and books. Some he commends for acknowledging demonic activity and exorcism. Others he castigates for denying or failing to discuss it (153-167). It may interest WELS pastors to hear criticism of our pastoral theology textbook: The Shepherd under Christ. “This book almost completely avoids the work of Satan, demonology, or demoniacal possession – so much so, that the subject matter does not even get a mention” (155).

This book makes a wake-up call to western Christianity. Malagasy Lutherans not only recognize Satan’s forces surrounding us, they have a scriptural Christo-centric system to combat it. Western Christianity, however, often pays only occasional lip-service to the reality of demons. We hardly ever suggest someone’s erratic behavior or doctor-baffling illness might have demons causing it. Slightly scarier, modern pastoral training is skimpy on the topic. Though Professors em. Schuetze and Habeck surely acknowledged the reality of demons and exorcism, Bennett’s criticism of The Shepherd Under Christ is not illegitimate. When talking occult or paranormal activity, WELS folk tend to mention Siegbert Becker’s book Wizards that Peep, but the discussion usually stops there. (It is surprising that Bennett neglected to mention Becker’s Wizards That Peep in his recommended resources.) While we don’t often delve deeply into discussion on this topic, I tried to remember another caution while reading. If Christians pursue a more conscious fight against demons, we do well not to overestimate human roles in exorcism. The prevailing plague of western Christianity is ignoring spiritual warfare. Yet, it is challenging to find a middle road between ignoring and a presumptuous fascination with it. Bennett shows good balance. He cites Pentecostal or charismatic authors on spiritual warfare but uses only their basic evangelizing proposals (9-13). As we study spiritual warfare, let’s practice discernment with Pentecostal terms like Bennett did (6). And we also do well to stay vigilant. Many charismatics go “into great detail about” (Colossians 2:18) spiritual forces and how to control them but seem not to realize which side of the battle they’re championing. Keep us from doing this, dear Father in heaven!

Pastors (and all Christians) don’t have to become demonology experts to join the battle. Bennett makes simple observations. Hospital calls usually include prayers with non-specific requests for healing. Why not explicitly ask God to expel evil spirits from persons or places? With precedent, we may even address devils directly “in the name of Jesus.” Lutherans defy Satan in hymns like “Jesus, Priceless Treasure” and “God’s own child, I gladly say it.”

Without reading Bennett’s book, you can still derive its benefits by noticing references to demons more in Scripture and Luther. Consider all of Paul’s letter to Ephesians (especially chapter six) and Ephesus’ history in Acts, Revelation imagery, David and Saul, Micaiah opposing Ahab’s prophets, Christ’s ministry. Read Luther’s catechisms, morning and evening prayers, “A Mighty Fortress,” and all his writing. We skim over terms like “old evil foe,” “power of the devil,” and “Antichrist.” Let’s not think freaky spine-chilling exorcist stuff only happens to unbelievers or in third-world countries.