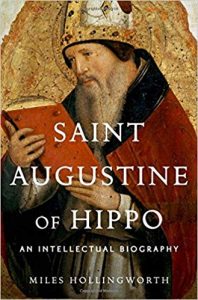 Hollingsworth is Visiting Research Fellow in the History of Ideas at St. John’s College, Durham University, in the United Kingdom. He specializes in philosophy, history, religion, and political theory. His work on Augustine’s life and influence has won numerous awards.

St. Augustine of Hippo is one of the most noteworthy thinkers not only in the history of the Christian Church, but in Western history. His penetrating, incisive mind and formidable intellectual gifts have enriched Western society for centuries. Augustine looked inward as well as outward. His relentless focus inward on the human heart and outward on the Word of the Lord continues to make him applicable every day. His work applies to the individual seeking after God and to the under-shepherd of souls who wants to deepen and mature in his craft. There is not a Christian or a pastor who will not benefit from a closer engagement with St. Augustine.

His life was more multi-faceted and his thought was deeper and more robust than we might first assume. St. Augustine actually lived several lives’ worth of experience. As a top-notch secular orator and young man in the clutches of false religion, as a Christian pastor and catechist, and as an ascetic and doctrinal leader of the highest caliber, his life encompassed just about every temptation and challenge that we ourselves may face. His diversity of lived experiences strongly shaped his teaching. Yet too often St. Augustine’s teaching is considered in isolation from his life story. What we often do to Augustine is symptomatic of what happens with much ecclesiastical and denominational history. We cherry-pick a set of facts that form a narrative, and this incomplete mélange of facts becomes all we feel we need to know on a given topic. It may even be enough for the uses to which we usually apply the information. But is it really enough?

Hollingsworth writes a corrective for this superficial understanding. His approach in this biography of St. Augustine will come out of left field for many WELS pastors. Firstly, it’s not a biography of the man only. That word “intellectual” is in the title for a reason. Hollingsworth uses St. Augustine’s life story, well documented in his autobiographical Confessions and in his other writings, as a prism or lens with which to examine Augustine’s ideas: his views on time, love, government, language, and so on. This lends a subtle, abstract air to the book. Such a foray into the rarefied world of ideas might not be everyone’s cup of tea after a long and varied workday. But for those with the patience and the desire, Hollingsworth gives a guided tour of Augustine’s views that is second to none.

Part of this is due to Hollingsworth’s broad range of knowledge and facile handling of an astonishing array of sources. He does not operate with anything resembling the standard “four branches” mental grid that we acquired through our schooling. Everything in the history of ideas (this may be only a slight exaggeration) is fair game. Hollingsworth has a magisterial command of Augustine’s output (no mean feat, given how prolific St. Augustine was), but he doesn’t stop there. Rather than reeling off quotes, he engages with the substance of Augustine’s thought. He is to be commended for recognizing the easy way and ignoring it.

Hollingsworth also draws on currents of thought from every era between Augustine and us, Christian and non-Christian alike. One finds oneself reading with a thumb permanently planted in the endnotes, just to check where a particularly apt turn of phrase or a poignant quote came from. It might be Evelyn Waugh or Sigmund Freud, Wittgenstein or Niebuhr – famous and obscure alike. Because of his background in political theory, philosophy, and history, Hollingsworth is able to make connections from unpredictable angles. His linking of such disparate sources and strains of thought can be frustrating at times, but it can offer unexpected flashes of insight into contemporary life. For instance, Hollingsworth notes, the temptation to dabble and speak in the languages of great normative change can be the real danger. Nationalism is a poor fit for human history and its individual testimonies…But that makes it also monolithic and belligerent in relation to the whole host of human experiences that can hardly be expressed in words; because there are so many shades of meaning. Augustine feared very much the invention of a Christian nationalism over his preferred concept of ‘two cities’. Later in his life, he would actually have to face down such a movement in the Donatist Church of Africa (41).

Hollingsworth has picked up on the political and social currents that converged in recent elections here and overseas. By racking focus so fleetingly from Augustine to us and back again, Hollingsworth shows us that the concerns and threats the Christian Church faced in Augustine’s day are not so very remote, after all. In fact, they are much like our own. Augustine’s God-given wisdom and faith-filled response are likewise worthy of emulating and borrowing from.

This biography is not, strictly speaking, a book of doctrine or on doctrine. Hollingsworth’s personal doctrinal convictions are not apparent in this book. He did not need to be a Christian to write it. He is, however, fair and balanced in his analysis of Augustine’s Christianity, which is all that can be asked in that regard. Hollingsworth lines up with Scripture where Augustine does, which is nearly all of the time. Nor, as has been said, is this strictly a biography. It lies somewhere between them, with a heavy dose of philosophy blended in, so much so, that one is forced to pause on nearly every page and think through Hollingsworth’s line of argumentation.

This is not a drawback. In fact, it might be one of the book’s chief strengths. This book is not a quick read. You may be able to mine a few gems in the form of quotes from Augustine, or a few anecdotes for sermons or Bible classes. This book’s value lies in making you think. The greater part of a pastor’s day is driven by the needs of the moments and dictated by emergencies. The currents of our national conversation push and prod us along with the latest outrage, the latest crisis. Everyone talks and no one listens. Our national discourse has become a mindless scream. The fact that so few actually think, and think critically, or know the history and underpinnings of the ideas they decry, does not mean we should abandon paying attention to ideas. Quite the opposite. Studying ideas – not just Christian doctrine, but ideas rooted in it – and their history, transmission, and impact, has value when ideas themselves become weaponized and so few know how to reason. Our nation is becoming increasingly atomized and confused. St. Augustine’s forays into the depths of the human heart can be our guide as we reach out to the masses with the Gospel of Jesus Christ.