The Case for the Resurrection of Jesus

The Case for the Resurrection of Jesus 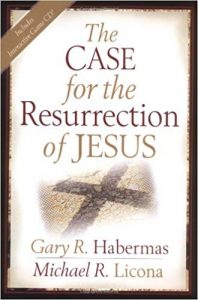 Gary R. Habermas (Ph.D., Michigan State) teaches at Liberty Baptist Theological Seminary and Graduate School in Lynchburg, Virgina, and chairs the Department of Philosophy at Liberty University. He has authored, co-authored, or edited forty books. Michael R. Licona (Ph.D., Pretoria) teaches at Houston Baptist University and is president of Risen Jesus, Inc. The most recent of his seven books is Why Are There Differences in the Gospels? What We Can Learn from Ancient Biography (Oxford University Press, 2017).

Tom, the guy in accounting, asks what you enjoy doing when away from the office.

You see this as an opportunity to talk about the evidence for Jesus’ resurrection: “I’m part of the visitation team at our church. We follow up with those who visit us for the first time on a Sunday morning. We ask if there is anything we, as a church, can do to meet their needs. I also ask if they’re aware of the historical evidence for Jesus’ resurrection. Most aren’t, so I briefly share some of the evidence with them. I’ve been doing it for about a year now, and I really find fulfillment in it.”

“What do you mean by ‘historical evidence for Jesus’ resurrection’? There’s no real evidence. You have to believe the Bible.”

“I understand where you’re coming from. Many people think that you have to believe that the Bible is the inspired Word of God in order to believe in Jesus’ resurrection. However, I have found that the evidence that Jesus rose from the dead is pretty good, even if we consider those facts that are so strongly attested historically that even most skeptical scholars grant them.”

Now your coworker is really curious. “What do you mean by historical facts?” he asks (209-210, adapted and abridged).

Toward the end of Habermas and Licona’s book The Case for the Resurrection of Jesus, this imaginary conversation with Tom, the guy in accounting, is used to demonstrate how the reader might put into practice the apologetics that were taught in the previous 13 chapters. Three of the book’s key points show through in this conversation snippet.

The authors claim that once those four basic facts are granted, a real, bodily, glorious resurrection is the only logical explanation for what happened.

I’m not sure this is a book I trust enough to give to a layperson. But it has some basic concepts—especially in the two chapters that survey the “minimal facts”—that it would be good for all pastors to be familiar with to help them help their laypeople talk to “Tom in accounting.”

First off, I disagree that Jesus set his resurrection up as people’s one test for whether or not he is the Savior. Briefly skimming through John’s gospel, for example, you’ll find more than a dozen things Jesus pointed to as tests and testimonies of his identity. There is no rule that the path to believing in Jesus’ identity has to start at the empty tomb. Rather, everything he did and said in the gospels is wonderful enough to draw skeptics to the faith. (Yes, every bit of the rest of Scripture has power to lead to him, too.)

That said, Jesus’ resurrection is truly fundamental to our faith. It cuts closely to the heart of what our good news is all about. It’s certainly a good thing to get skeptics thinking about—one of the best things.

Secondly, Habermas and Licona’s approach downplays humanity’s need for the Holy Spirit to create faith through the means of grace. Instead, the reader is taught, Point “Tom in accounting” to the scholarly consensus of modern historians: if you’re patient enough, you can get Tom to agree that a physical resurrection is the only logical explanation that fits the agreed-upon facts. In other words,

In summary, you point to the historians’ evidence. Then you use logic to eliminate alternative explanations. Perhaps as an oversight, the authors even refer to this human-consensus-and-logic-based approach as sharing our Lord’s “good news” (150)!

The testimony of human history and logic is not what creates faith. Nor can it compare in grandeur to our Savior’s own testimony, flawlessly recorded by the four holy evangelists. This book won’t help our laypeople be crystal-clear on those distinctions, either for themselves or for Tom in accounting.

On the other hand, human logic and evidence do appeal to human nature. A recent blog post claimed that “46 percent of Gen Z kids say they need factual evidence to support their beliefs” (Dale Hudson, “Why Gen Z Doesn’t Know Christianity is True”). Yes, ancient unbelievers like Josephus, Tacitus, Lucian, Mara Bar-Serapion, or the authors of the Talmud can only offer us vague and disputed testimony. (By the way, there are long articles debunking each of them as evidence for Christianity on websites like rationalwiki.org.) But there are definitely doubters who will appreciate that testimony all the same. They’ll appreciate the testimony of the apostolic fathers and the obscure sources quoted by Eusebius. They will appreciate knowing what the vast majority of “scholars who study the subject, even the skeptical ones” agree about Jesus. (Even though this book doesn’t ever tell us what “the subject” exactly means.)

Something that sets Christianity apart from other religions is its verifiable, specific historical context. It isn’t just “once upon a time” or subjective opinion based on our feelings. Licona and Habermas do offer help for people who are eager for evidence that the great works of Jesus were “not done in a corner,” but are “true and reasonable” to believe (Acts 26:25,26).

Finally, this book’s most serious drawback is that Habermas and Licona talk more like debate coaches than guides to respectful, gentle, friend-to-friend witnessing.

Yes, there are four pages on being loving, humble, and a good listener. But then, on the very next four pages, the reader is coached on how to keep skeptical friends from changing the subject before you get them to expressly admit how good the extra-biblical evidence is for the resurrection. How will that come across as humble, as being a good listener? Compare that approach to these recent comments from an LC-MS pastor, for example:

Soon after I started at my current parish more than nine years ago, young people outside of the church began coming to talk to me about God, faith, life and . . . I learned right away what did not work—taking aim only at the intellect. What I had always considered to be time-tested modern apologetics seemed to put young people into a corner, thereby making them more suspicious and defensive. It was their ideology versus my ideology—and as far as they were concerned, it was just one more instance of a Christian trying to show how superior he thought he was” (Chad Kendall, “What Are They Seeking? Pointing Millennials to Jesus in a Secular Age” The Lutheran Witness. Nov. 2017).

Might the extra-biblical evidence be just what some skeptics need, to get their attention or clear up some of their mental objections to the gospel? The surveys seem to say so. But there are also a whole lot of people today who see our God and his plan of salvation as not much different from the god-villain Thanos in the newest Avengers movie, and his plan to murder half of the universe (a plan he repeatedly uses the words “mercy” and “salvation” to describe). These people’s main concern isn’t whether our God has historical evidence: it’s whether he has love.

PreviousPreach the Word – July/August 2019
Next Is That “Daily” Part Really Necessary?!?!