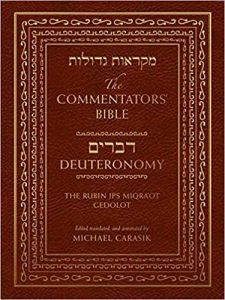 Michael Carasik teaches Biblical Hebrew at the University of Pennsylvania. He is also the weekday Torah reader at Historic Congregation Kesher Israel in Center City Philadelphia. He received his Ph.D. in Bible and the Ancient Near East from Brandeis University. He is the author of Theologies of the Mind in Biblical Israel. In addition to this volume, he is also the editor, translator, and annotator of The Commentators’ Bible on Genesis, Exodus, Leviticus, and Numbers.

This commentary is a Miqra’ot Gedolot “Large-Format Bible” (xi). It is laid out the same as the other books in this series. Each page has the Hebrew text, two English translations (the new and old JPS translations), Abarbanel’s questions, some abridged and/or revised comments from Rashi, Rashbam, Ibn Ezra, and Nahmanides, and selections from the Masorah and a few other commentators.

Since this commentary has the standard pattern for most commentaries (text and comments), it may be more prudent to give a short biography and samples from the four major commentators. This reviewer picked three sections of interest from Deuteronomy: the prophet in 18:15; the writer of chapter 34; and the burial of Moses in 34:5-6.

This reviewer found the glossary of terms and list of names at the end of the book sufficient. It is useful that each page has Abarbanel’s questions. Those questions give a clue to what the commentators are attempting to answer in that section of Deuteronomy.

The Jewish Bible Quarterly called this book “A useful volume for those not fluent in Hebrew who want the experience of engaging with the Torah text and the traditional commentaries” (62). This reviewer would heartily agree. As the above selections show, this book is akin to hearing a debate that transcends centuries (if not millennia). One commentator has his say, then another, then another, etc. The next commentator may address what the previous said or may move on to a different subject. Like in any debate, some comments are helpful, some are insightful, some are thought-provoking, some are off-topic, some are dubious, some are better left not stated. (The above selections show these different possibilities, maybe even in the same quotation.)

This commentary is useful, if only for this one reason (though there are more): it offers a glimpse into the Old Testament that is different from one’s norm. This commentary opens up millennia of research, thought, and study on Deuteronomy. It not only gets the reader into the fascinating world of medieval Jewish scholarship but also further back into the Talmudic era, if not beyond. That is a world with a few concerns, but a world worth exploring.

To assist the reader of this commentary, who is unfamiliar with the referenced people and items, a list of important terms is also provided. This list expands on the list provided in the commentary.

PreviousBuilt on the Rock: The Healthy Congregation
Next Jesus Redefines Our Best Days!