The Ecumenical Luther: The Development and Use of His Doctrinal Hermeneutic 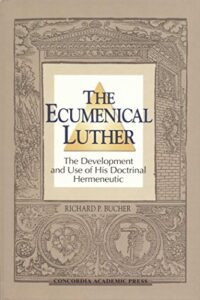 The Ecumenical Luther. The ecumenical Luther? The title of this book might seem like an oxymoron, or at least a bit ironic. Wasn’t Luther the reformer who boldly stood at Worms and announced, “Here I stand,” sparking a division that forever separated the western church? Isn’t he the one who allegedly wrote the words, “This is my body,” on the table at Marburg, thus literally and figuratively showing that he would refuse to budge an inch on the real presence of Christ’s body and blood in the bread and wine of Holy Communion? On the surface it might seem like Luther was anything but an ecumenical churchman seeking peace and unity in the visible church. However, in Ecumenical Luther, Richard Bucher invites the reader to peer beneath the surface and consider Luther’s motivation and methodology in dialoguing with other Christians.

Theologically conversative Lutherans often speak about how agreement in all doctrines is necessary for joining in church fellowship with others. This naturally leads to the question: What are all doctrines? Instead of operating with a list of essential doctrines, Bucher argues that Luther approached ecumenical dialogues with a guiding principle, which the author calls his doctrinal hermeneutic. This hermeneutic consisted of a Scriptural canon and an evangelical canon. Simply put, for Luther the scriptural canon meant that an article of faith needed to be based only on Scripture, and the right Scripture rightly interpreted. The evangelical canon meant that “only teachings necessary for salvation and in harmony with the Gospel, or which keep the conscience free can rightly be considered articles of faith” (48). While Luther never explicitly wrote about his approach to doctrinal discussions, Bucher shows how he applied his doctrinal hermeneutic in real-life situations. In chapters 3-5 he traces how Luther’s approach was there from the beginning, but also how it developed and served as the guiding principles in his discussions with the Unitas Fratrum (chapter 3), at the Marburg Colloquy (chapter 4), and as he composed the Schmalkald Articles (chapter 5).

The historical examples of how Luther applied his doctrinal hermeneutic are especially helpful. This reviewer found the chapter on the Marburg Colloquy to be especially refreshing and enlightening. Many have criticized Luther’s participation at Marburg as being inflexible and recalcitrant. Some have even painted the reformer as a grumpy theologian who simply insisted that his opponents use his metaphysical understanding of the presence of Christ’s body and blood in the Supper, because after all, it was his understanding. Bucher reveals that Luther would not and could not bend on the presence of Christ’s body and blood in the Supper, because of his scriptural canon (right scripture, rightly interpreted) and his evangelical canon (necessary for salvation).  Zwingli and his allies argued that the bread and wine could not be the body and blood of Christ, because according to John 6:63, “the flesh counts for nothing.” Luther understood the implications of using the wrong Scripture with the wrong interpretation (violates the scriptural canon). If the “flesh counts for nothing,” then why did Christ take on human flesh in the incarnation? Why did he need to be truly human and give his flesh and blood on the cross? For Zwingli and his followers, the doctrine of real presence in the Lord’s Supper was and is a peripheral doctrine. For Luther and his followers, it is a doctrine intimately tied to Christ’s saving work for sinners (the evangelical canon); therefore, Luther could not budge. The Zwinglians’ teaching violated both the scriptural canon and the evangelical canon.

In the final chapter, after giving a brief history of the modern Ecumenical Movement and examples of compromise and accommodation, Bucher explains how Luther’s doctrinal hermeneutic provides a better path forward: “The reformer’s hermeneutic clearly defines what is indispensable—namely, what doctrinal agreement is necessary for unity—by clearly defining what makes something a necessary doctrine. Only those teachings that are based on the right Scripture rightly interpreted and/or are necessary for salvation and integral to the Gospel of grace in Christ Jesus are doctrines that must be agreed on for unity among the churches” (140). A doctrine is not an article of faith because it has been declared to be one by the teaching office of the church or because of sacred tradition or even a unanimous vote, but on account of its relation to the central teaching of scripture—justification. “Any explanation of articles of faith that conflicts with the correct view of justification is to be rejected as false. And any church teaching that does not involve this view of justification is not an article of faith that is necessary for salvation or unity” (156). This was Luther’s criteria for determining whether to join with others in church fellowship.

Luther lived at a time of incredible upheaval and rebuilding. Pastors today sometimes feel like the walls are collapsing around them. At the same time, we have more exposure to other Christians than ever before and are hopefully open to dialogue. Bucher reminds us that “such striving for and preserving of external unity is not optional but is commanded by God.” Luther’s principles, clearly presented in this book, can serve as a solid foundation as pastors dialogue with those of other denominations. Some might be disappointed that this book does not provide a simple formula or a list of fundamental doctrines necessary for joining in church fellowship with others. Others might be surprised that Luther didn’t simply say that agreement in all doctrines is necessary for fellowship. Still others might think that the religious landscape is so different today that there is very little we can learn from Luther. However, most will find that Luther’s doctrinal hermeneutic provides a scriptural and gospel-centered framework for at least starting a conversation.

One criticism might be that the author repeats his explanation of Luther’s doctrinal hermeneutic several times throughout this book. However, instead of seeming patronizing or overly redundant, it helped drive the central point of the book home. It was also useful to be reminded of the central theme as the author examined different historical applications. While Luther’s doctrinal hermeneutic is helpful, unfortunately, it does not always provide a solution for the doctrinal issues that divide conservative Lutherans today, which are often debates about whether the right scripture is being used and whether it is being rightly interpreted. There also seems to be a great amount of ambiguity in applying Luther’s evangelical canon. It’s not exactly clear which doctrines tie directly into the doctrine of justification. I would have been interested in hearing Bucher at least address these challenges. But perhaps this wasn’t Bucher’s goal in writing this book.

In conclusion, Bucher does an excellent job of clearly describing Luther’s approach to doctrinal discussions. He does it in a clear, well-written book that will be a blessing to those interested in discovering Luther’s ecumenical approach.

PreviousPsalm 112
Next Friends of the Seminary Day