The Honeycomb Scroll: Philipp Melanchthon at the Dawn of the Reformation 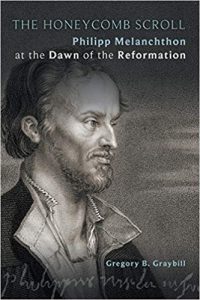 Gregory B. Graybill is senior pastor at First United Presbyterian Church of Moline, Illinois. He earned a DPhil at the University of Oxford and is author of Evangelical Free Will: Philipp Melanchthon’s Doctrinal Journey on the Origins of Faith (2010). He is collaborator on Philippians, Colossians in the Reformation Commentary on Scripture (2013).

When we think of Philipp Melanchthon, a few images pop into our heads. We think of Luther’s comrade-in-arms. We think “boy genius.” We think “teacher of Germany.” We think “author of Augsburg Confession.” We think “betrayer of the Reformation.” That’s a lot. And it identifies Melanchthon as one of the most important people of the Lutheran Reformation, if not the entire sixteenth century. But how much do we really know about Melanchthon?

Gregory Graybill seeks to fill in some of our blanks with his book, The Honeycomb Scroll. He makes it his purpose to paint a portrait of the dawn of the Reformation from the perspective of a man who is known, but sometimes overlooked. Melanchthon’s theology is studied, pondered, and debated. Monographs are written on his evolving views of the sacraments, man’s will, justification, and adiaphora. Essays are written on his involvement in the infamous Interims. But we tend to know little or nothing about the man himself, his early life, his faith, how he came to Wittenberg, and how he came to be uniquely equipped to work well with Luther. Graybill sets out to tell us about the man himself more than about his doctrines (4).

Graybill’s book focuses on Melanchthon’s life up until about 1524. A brief epilogue speeds the reader through the remainder of Melanchthon’s life. This means that we do not really meet the Melanchthon who writes the Augsburg Confession, revises it, moderates his positions, or advocates for the Interims, at least not in this volume.

We do, however, meet the unknown Melanchthon. After setting the scene of Ottoman hostilities, Renaissance popes, world-renowned kings (Charles V, Francis I, Henry VIII), and ever-warring German princes, Graybill introduces us to Mr. and Mrs. Melanchthon (or, we should say, the Schwartzerdts). We discover that Melanchthon had a solid Christian upbringing under the steady guidance of two well-balanced parents. His father was a famous armorer. He worked for one of the imperial electors and came to the attention of the emperor, Maximilian, for his work.

Most importantly, Philipp’s parents raised him up in the training and instruction of the Lord. Going to church, talking about Jesus, and reading the Scriptures were all familiar concepts in the Schwartzerdt home, and Philipp did not “consider the piety of his parents smothering or controlling. Far from rebelling against his parents’ faith, young Philipp embraced it with all the earnestness and seriousness he saw modelled in his father, along with a touch of his mother’s lively temperament” (46). One fine piece of advice passed on from mother to son was, “Giving alms will not impoverish you. Going to church will not delay you. Injustice will not enrich you” (37).

This piety stayed with Melanchthon his entire life. He was a personally pious man. As a student and then professor he carried along and read his Bible always. When sermons were poor, he read the Scriptures. This piety that began with his parents cannot be overlooked. We do well to remember the impact of the head of the household passing on the faith in our own homes and parishes.

Life was not always rosy for Melanchthon. In a chapter entitled, “A Time to Mourn,” Graybill describes the impact that war, and specifically the siege of Bretten, had on a young Philipp. “The bucolic nature of Philipp Schartzerdt’s early childhood came to an abrupt end in 1504. He was seven years old when fire and blood came to the city. Executions took place outside his front door…. A murder suspect fled through the Reuter family home, with a vengeful mob in pursuit. What effect might these events have on a precocious, sensitive child?” (61). Perhaps this plants the seeds of Melanchthon’s intense desire to find peace at all costs, as in 1521 when he seems quietly to watch things melting down in Wittenberg, in 1529 when he treads lightly (as Luther said) in his Augsburg Confession, in the Interims of the 1540s and 1550s, and in his vacillating theological positions.

The next key influence Graybill describes was Melanchthon’s time in the academy prior to coming to Wittenberg. During his time in the university, he studied under, was classmates with, or met many who end up being influential in Reformation happenings. Many of them wound up on the Zwinglian or Reformed side of the debates later. This might help to explain some of his irenic tendencies in that direction, and why it seems he leaned towards those views in his confessional revisions. He knew personally many of those people and had been school-boy friends with them.

In the end, Graybill assesses Melanchthon as being unsatisfied with the situation in which he was studying and working. He sees this as driving Melanchthon toward Luther. It didn’t happen intentionally, however. Graybill clearly sees Melanchthon developing along an independent course towards his own evangelical breakthrough. “[T]he Bible in particular began to shape and reshape Melanchthon’s thought world. This shows that Melanchthon’s embrace of evangelical theology a few years hence was not so much a matter of being overawed by Luther, but rather an instance of Luther providing the last piece in a puzzle that was already almost complete when Melanchthon arrived at Wittenberg” (128-129). If for Luther it was his visit to Rome and the crass venality of the penitential system that led to his questioning and breakthrough, for Melanchthon it was his work in academic circles and his own reading of the Bible alongside the preaching he heard that led him to his.

The constant reminders of Melanchthon’s youth are stunning. He was only twenty-four in 1521, the year of the Diet of Worms and the chaos in Wittenberg. Though he had been in the public eye as a Wunderkind and professor and writer for 7-10 years already, at the same time, he was the low man on the totem pole. He was among the youngest and least-tenured men on the faculty and in university leadership. In addition, some of the men around him were fire-breathers (Luther and Karlstadt). He loved the lecture hall and his study. It’s not a surprise that he struggled in this first real crisis of his professional life to assert himself and find his role.

In the end, we discover a tiny (less than five feet tall) workaholic who could not keep house. (In Wittenberg, Graybill says, “he lived in a shambolic bachelor pad” [201]). We also discover a theological genius, as did Luther (also not known for his housekeeping prowess). “Luther had nothing but praise for Melanchthon. He often recommended Philipp’s books second only to the Bible, and he was known to gush that Melanchthon surpassed him in theology. As a pair of workaholics with a shared theological worldview, Martin and Philipp got along famously” (200). This little genius produced his Loci in 1521, and eventually produced three of our Lutheran confessions: the Augsburg Confession, the Apology, and the Treatise on the Power and Primacy of the Pope. If he never did anything else, we would be in his debt.

Graybill’s book meets his goals. We see the beginning of the Reformation from Melanchthon’s perspective. Along the way we get to know Melanchthon the man and understand him far better than we ever have. This volume focuses on his life, more than his theology. (Plenty of others focus on the theology.) It is well worth your time. It shows us a man who devoured the Word of God, who knew the psalmist’s truth, “How sweet are your words to my taste, sweeter than honey to my mouth!” (Psalm 119:103).Michael Kruger is a professor at and the president of Reformed Theological Seminary in Charlotte, North Carolina.