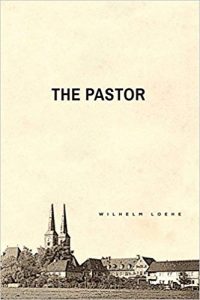 Wilhelm Loehe (1808-1872) was a Lutheran pastor in Germany who was the main founder of the Missouri Synod’s seminary in Fort Wayne, Indiana, and who sent many missionaries to America in the nineteenth century. These missionaries helped form the Missouri Synod and the Iowa Synod. (The latter is now a part of the Evangelical Lutheran Church in America).

In the early years of my ministry, I did not look forward to the “practical” papers at conferences and conventions. I didn’t want to hear about different kinds of preaching or how to do counseling or the best ways to leverage social media to one’s advantage. I wanted to get into the real stuff, the meaty stuff, the exegetical, the systematic, the historical. Likewise, when it came to reading assignments, I did everything in my power to get the doctrinal or historical ones, not the “practical” ones. I say this to my shame. Forgive me.

Now I find myself thinking exactly the opposite. I’ve joined a study club where all we’ve done for the last two years is read through various pastoral theology textbooks. I’m eager for the questions of casuistry at conferences, because we’ll get to talk about the meaty stuff, theology applied, that habitus practicus we talked about in dogmatics. Because I finally get it. Theology that isn’t lived out, played out in real life, isn’t really theology. Just like Jesus is only an historical character until he becomes Jesus for me.

I hope that you’ve gotten to this place faster than I did. If you have, then perhaps you’ve already read Loehe’s volume, The Pastor. Or it’s on your “to read” pile. Or you’re waiting for someone to tell you to add it. (Consider this me telling you: “Add it.”) If you haven’t, then I advise you to pick up The Pastor.

Admittedly, a volume written in the 1850s will be antiquated in some areas. And that it was written by a German pastor in Germany will leave it idiosyncratically German in spots. This is true in a handful of places. Nevertheless, the parish that Loehe describes, and the ministry he is trying to prepare men for, is still ours.

The book is divided into two sections. The first section (or booklet) deals with the personal conduct of the pastor. The second section deals with specific areas of ministry: homiletics, catechesis, liturgics, pastoral care, care of the sick. The opening part of the first booklet, called “preliminary matters” (pages 5-39), is worth the price of the entire book. This part describes everything prior to a man becoming a pastor. Here Loehe describes the education of a pastor and the steps he might take before assuming the office fully.

A key word to be taken from this first section is “humility.” Loehe drives home the point that we must understand the nature of the office and ourselves. First, let me deal with me. Loehe could easily take as his motto St. Paul’s exhortation, “Do not think of yourself more highly than you ought” (Romans 12:3). I needed to hear this. And I suspect you do too. At one point, Loehe breaks down the future pastor. Each of us suspects that we have a great gift to give to the church. Some of us more than suspect it. We’re also pretty sure our gifts outstrip those of pastors around us. We see ourselves rising up to great heights, perhaps to the classrooms of our teachers, or into synodical offices. But then Loehe suggests that in truth, most of us are rather mediocre students. Then, “Certainly, in order to avoid laziness of the spirit, daydreams, deceptions, and many detrimental wrong turns, one should remind the students again and again that what awaits most of them is not the lectern of their teachers, but the modest lot of a country pulpit” (9).

This is an excellent reminder in two ways. Firstly, we must exercise sober judgment. We are not as excellent as we assume we are. Secondly, we forget that the most “modest” pulpit, the most rural setting, is still the kingdom of God. This helps us battle against ambition, to be in a key spot, an influential pulpit, etc. Maybe I’m just talking about me, but I rather doubt it.

As to theology itself, Loehe holds it in the highest regard. In fact, he makes a rather bold statement early on: “Theology and the pastoral office that it is supposed to empower make the greatest demands on a person’s strength. Theology rises to the highest heights and descends to the deepest depths; it has the widest scope of knowledge and all other areas of human knowledge border it on all sides. Those areas of knowledge receive light, life, and meaning from theology” (6). I’m not sure how many would agree that theology outranks all other pursuits of learning, nor that it’s the most tasking vocation there is. I’m thinking of the old saw about how a pastor only works an hour a week, or the confirmand who asked me at a youth rally, “So, pastor, do you have a job?” “Yes, I’m your pastor.” “No, I mean a real job, where you get paid and stuff.” But, if you consider Loehe’s point, without engaging in debates with your farmers and contractors and scientists and teachers, that theology touches on every area of life, that a pastor must be prepared to deal with everything from every direction, that his preaching and teaching affect every corner of life, well, then it’s a well-taken point.

Frequently throughout this book, Loehe describes how a pastor approaches his office, both his initial entry into the office and how he carries it out over the years. These thoughts too are worth the price of the book. Simply summarized, Loehe says that a pastor should do what stands before him slowly and thoroughly. He takes Major Winchester’s approach from M.A.S.H. “I do one thing. I do it very well. And then I move on to the next.”

Loehe also advocates avoiding making a big splash or big deal out of everything you do. “The more everything goes unnoticed and the more the progress is natural and appropriate, the less it appears forced and the more it will proceed undisturbed” (44). In other words, make haste slowly. Take your time. “If it is possible, as far as it depends on you, live at peace with everyone” (Romans 12:18). “So whatever you believe about these things keep between yourself and God. Blessed is the man who does not condemn himself by what he approves” (14:22).

Loehe also spends a significant amount of time discussing how a pastor relates to the man who came before him and the one who will come after him. To boil it down: Respect the work of the man who came before you (even if you don’t agree with it all) and think long and hard about how what you’re doing affects the man coming after you. If you change nothing else about your ministry, or think deeply about nothing else, this might be the one thing. I wonder if it might help us more peacefully negotiate some of the adiaphoristic waters in which we thrash occasionally.

This will work if we’re doing what we’ve been told to do from day one at the Seminary: remaining in the Word and diving deeply in it for ourselves. If theology is so all-encompassing, if it touches everything, then “He who has to give daily must have a rich source from which he can draw” (6). If preaching is the main way we touch people, then we must be the most textual preachers possible, “But in order to become a good textualis, one has to do more than study one’s sermon texts. That also, but the studying of a specific text has to be based on a daily, continuing study of the entire divine Word. Overview creates insight, and the individual passage can only be fully understood in its connection with the whole” (223). If theology is habitus practicus, then “God’s Word is the only means for the care of souls. God’s Word alone penetrates” (299). Loehe sums up his pastoral theology, our ministry in this way: “The simple rule is this: Use the old means in the old way and remain in teaching, learning, experience, struggle, and prayer, so that you may mature as a pastor” (301). Don’t get caught up in tricks, what Loehe calls “methodology.” Get caught up in the Word.

I would be remiss if I didn’t mention a couple of areas to watch out for. There were at least two instances (pages 37, 90) in which Loehe makes anti-Semitic remarks. A footnote on page 90 makes it clear that such remarks are unacceptable from a pastor, but also reminded us that Loehe was a man of his times. I was a little unnerved that the footnote didn’t condemn the remarks wholesale, as in, “Such remarks are unacceptable by any Christian anywhere.”

In another section, Loehe makes the case for a dispassionate pastor who is, in many ways, above the people because of his office. He argues against becoming close to the people. Some of this is the class structure of German society at the time. Some of it is the wisdom of avoiding playing favorites. Loehe, however, took it further than I was comfortable with and seemed to want to have a distant Herr Pastor, rather than an empathetic and involved in the nitty-gritty of daily-life Seelsorger in the model of the pastors Bo Giertz writes about in Hammer of God. As an aside, if you’re not reading Hammer of God as part of your pastoral formation, you’re missing something worthwhile and important.

Buy this book: The Pastor. Read it. It will help you think about how you can be a better pastor.

PreviousYes, Pastor, You Too Walk in Danger All the Way!
Next Four Branches September – 2019