The Question of Canon

The Question of Canon 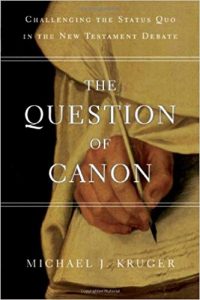 Michael Kruger is a professor at and the president of Reformed Theological Seminary in Charlotte, North Carolina.

There are a number of very good books which cover the topic of the New Testament canon, letting us know which books of the NT are all agreed on (homolegoumena) and the ones that people at various times and for various reasons had questions about (antilegomena).  This isn’t one of those books.  Kruger has a different intent and purpose in writing this book.  His intent is to tackle the question (and definition) of what canon itself is.  He starts out by giving the two basic definitions of canon, in use today:

Kruger then adds a third definition to flesh out these definitions.  He calls it the Ontological Definition of Canon.  He puts it this way:  “The ontological definition focuses on what the canon is in and of itself, namely the authoritative books that God gave his corporate church.” (40) He describes the definition this way:  “On this definition, there would be a canon even in the first century, as soon as the New Testament books were written.” (40)

What follows in the book then is page after page of evidence that this third definition is not just useful, but also necessary in achieving a proper understanding of what the NT canon is.  With a thorough assembly of internal evidence, manuscript evidence, and patristic evidence he fleshes out a stable foundation to conclude that his own, new definition belongs together along with the other two.

One of the difficulties of doing any reading in canonical studies is that, for so many scholars, it is taken for granted that the canon is only the canon when we can tangibly see or touch it.  But this misses the forest from the trees.  How biblical manuscripts were treated shows us there is a canon before these manuscripts are copied.  How the church fathers spoke about these books of the bible show us that there was a canon before they wrote about these books.  Kruger does us a great service in not just reminding us of this fact.  But he gives us detailed evidence showing us how true this fact is.  When one finishes reading Metzger’s “The Canon of the New Testament”, this is the next book you should read.

There are limitations in the book. But they are few in number.  In regard to the nomina sacra in the NT manuscripts, he cites Barton, saying “these special abbreviations performed a function for the New Testament manuscripts that was similar to the function the Tetragrammaton (special writing of the divine name) performed for the Old Testament manuscripts; namely, they indicated that a book was regarded as sacred.” (102) This is a highly debatable statement in two ways:  First, there are nomina sacra that have very little to do with sacredness.  For example, ανθρωπος is very often contracted to ανος.  But it often refers to the simple generic use of the word. The second weakness to this argument is that there are times when it’s very clear that a name is not holy, it nevertheless receives a nomen sacrum.  In Dirk Jongkind’s “Scribal Habits of Codex Sinaiticus”, Jongkind notes that “The origin and subsequent use of nomina sacra is connected with reverential notions, but the use of nomina sacra in Sinaiticus is not determined solely by reference. Often nomina sacra are employed with very mundane referents:  πνευμα and its derivatives are used both for evil spirits and for the Holy Spirit, and πατηρ and κυριος can also be used in any context.” (83)  In my own readings I have concluded that it is safe to say that there is a tendency to use the nomina sacra in reverential contexts. But that varies from scribe to scribe. And sometimes a scribe throws away his own tendencies.

The other limitation is the dating of the Muratorian Fragment.  Kruger sets the date of the fragment to ca. 180. (162)  There has, in recent years, been a heated debate about the dating of this fragment. The earliest date would be ca. 180. But there are many scholars who conclude that the fragment is better dated to a century closer to our own time (or more).  For a synopsis of the discussion, a good start is Gallagher and Meade’s “The Biblical Canon Lists from Early Christianity.” (174ff)

Other than these two small corrections, this is an exceedingly valuable book to read.

Years ago, when was I was at the Seminary, I don’t remember covering the topic of the NT canon in depth.  Then I began my pastoral ministry in just enough time for Dan Brown to publish his popular books and in just enough time for Bart Ehrman to publish his scholarly works. Then, all of a sudden, people from all walks of life started asking, “who chose the books we have in the bible?” And lately, I’ve even heard my daughter speak about books that “don’t belong in the Harry Potter canon.” How is it that my middle school aged daughter can use the word canon, but yet, I struggle to define the word succinctly when I’m asked what the word means in a bible study class?  This book did a wonderful job of helping me to work through the many issues involved in tackling the question, “what is the NT canon?”