The Serpent and the Lamb

The Serpent and the Lamb 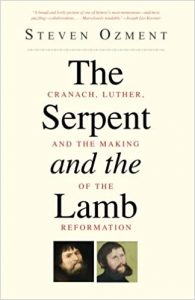 Introduction: What’s in a Coat-of-Arms — Painter Lucas Cranach received a wondrous coat-of-arms from his lord, Elector Frederick the Wise of Saxony. The eye-popping shield displayed a mesmerizing winged serpent endowed with awesome life-giving powers (1). After foreign booksellers had pirated the manuscript of Martin Luther’s revised Latin Bible, he and Cranach manufactured a protective seal, the Lutheran Lamb of God, to be embedded in future works (3).

Cranach in History, Art, and Religion — Over the centuries, historians and art historians have staked out their own areas of interest and competence within the sizable Cranach corpus (9). Of all his artworks, the altar paintings have received the highest marks for consistency. Earlier generations deemed his woodcuts to be “the most engaging” of all of his artworks (11).

Chasing Durer — In 1491-92, Cranach made his “bachelor’s journey” (Wanderjahr) through the southern German cities, expanding his skills and developing a style of his own by close observation of, and liberal borrowing from, the competition (31). The masterly Schleissheim Crucifixion became the watershed painting that climaxed the so-called Vienna Period (40).

The Compleat Court Painter — Under Spalatin’s direction Cranach’s job was twofold: to document and retrieve Saxony’s origins in biblical and classical antiquity, and to record the present-day activities of the court at both work and play (63). Cranach’s first large commission – Wittenberg’s Castle Church altar – tells the story of martyr St. Catherine of Alexandria (66).

Workshop Wittenberg: Cranach Domestic and Entrepreneurial — Between 1504 and 1510, Cranach’s workshop hired as many as ten assistants. By 1512 Cranach had moved out of the castle and into the town (89). He married Barbara Brengbier and five children were born (100).

Marketing Luther — In 1520, Cranach (artist and publisher) and Luther (author) combined their talents (125). Cranach also carefully produced Luther’s official court portrait – where Luther appears confined within a traditional saint’s niche, an open Bible in his hands, the image of a holy man with an open mind, obedient will, and god-fearing heart (130).

Gospel Art — In the aftermath of the iconoclastic controversy, Cranach and Luther collaborated on the images that would fill the Protestant churches (148). Between Cranach’s 1520 etchings that introduced Luther to the greater European world and the completion of The Wittenberg Altarpiece twenty-seven years later (1547), celebrating Luther’s career in the year after his death, Cranach had been an absolute godsend for the reformers (152).

Cranach’s Women — In supporting Luther’s case for universal marriage, Cranach contributed his own artistic commentaries on gender and sexuality, drawing from Old Testament stories and classical mythology (178). By the late 1520’s, the Cranach workshop had its own “beauty formula” for the production of classical, biblical, and contemporary Saxon women, whose composite best figures were interchangeable with different genres (183).

Remembering Cranach and Luther —The centerpiece of the Wittenberg altar reprises the last day of Christ’s life on earth by bringing the Savior and the Twelve Apostles into the Church of St. Mary to celebrate Luther’s life and work with the contemporary Wittenberg Congregation. In the surrounding scenes the work of the church continues at its everyday pace. The viewer beholds the preaching of the gospel, the baptism of infants, the lay confession of sin, and the latter’s “reconciliation” with God. Princes and clergy also mix into the crowd with the very first Christians, doing so as if they were next-door neighbors rather than distinct Christian generations living sixteen centuries apart (264).

My Evaluation of the Author’s Arguments — The goal of Steven Ozment’s book The Serpent and the Lamb was to explore the contribution Lucas Cranach Sr. brought to the Reformation. While his book projects the tone of an appreciative heir of the Protestant Reformation, he does note the arguments of Cranach’s critics. For example:

Nineteenth-century art critics described Cranach’s early artworks, those before Wittenberg (1505) and Luther (1517), as created “out of pure feeling alone,” a conceit of artists and art historians both past and present (11). In 1932, a well-known modern art connoisseur, Max J. Friedlander, takes a completely opposite view. He selected twenty-two of Cranach’s artworks completed during his Danube-Vienna period and proclaimed them “a self-contained group,” distinct from and superior to all of his artworks before and after (33). The post-World War II generation of East German scholars reacted strongly against what they believed to be a narrow, summary treatment of Cranach’s artwork, one lacking a proper (Marxist) historical context (18).

Ozment addresses the shrewdness of Cranach – or a concern for the bottom line – by reporting:

Inside the art workshop, Cranach’s reputation was that of a successful manufacturer of high-quality artworks with an impeccable skill in marketing them (101). He became a member of the city council. He opened the Cranach-Doring publishing house (106). When Cranach purchased his second great house, at 4 Market Square, he opened a very profitable pharmacy (117).

In behind-the-scenes plotting with city council members, Luther from the Wartburg and Cranach  in Wittenberg sowed the seeds of Carlstadt’s removal (137). Meanwhile, Cranach was also developing master plans for the construction and decoration of Cardinal Albrecht’s combined foundation church and private residence in Halle (144). Was this a betrayal? Or business?

Although Ozment addresses some secondary side issues, he keeps returning to his goal of exploring Cranach’s contribution to the Reformation. He reports on Cranach’s developing talent:

In 1508, the distinguished Nurnberg jurist and diplomat Christoph Scheurl dubbed Cranach pictor celerrimus, ”the swiftest of painters,” an accolade one may read today on his gravestone in Weimar (73).  Earlier that year at Mechelen in the Netherlands, he had painted a portrait of eight-year-old Archduke Charles, the future Emperor Charles V (74-75).

While in the Netherlands, Cranach’s approach to the artworks of others was to borrow, scrutinize, and boldly redevelop. Thereafter he allowed full-sized human figures to dominate the scene rather than dwarf them against towering landscapes (75-76).

Ozment is drawn to the saving faith Cranach received in Christ’s blood. The climax of The Serpent and the Lamb is found in explaining the Weimar Altarpiece:

In 1555, Lucas Jr.’s masterly Weimar Altarpiece joined The Wittenberg Altarpiece in still another celebration of the life and work of Luther and Cranach Sr. As the viewer scans that altarpiece he immediately beholds the familiar figures of Cranach, Luther, and John the Baptist, John being the biblical wilderness prophet who pointed out and authenticated Jesus as the Messiah at the birth of Christianity. Once focused on the scene, the viewer’s eyes jump immediately from Christ’s side-wound to the groomed head of Cranach, who appears not as a religious prophet, or reformer, but as a solitary penitent, his hands folded in prayer. He stares impassively at the viewer, who is surprised to discover that only Cranach among the three is actively receiving the Savior’s redemptive bloodstream. In this novel iconography Cranach is cast in the role of Adam, that is, “Everyman,” a stand-in for the whole of fallen humankind (273).

My Thoughts on How This Book Could Be Used in Ministry — Reading The Serpent and the Lamb is like meeting a new friend – Lucas Cranach Sr. – a dear brother in Christ – a man God placed in time when the Gospel was recovered – and once again freely proclaimed. This book is an encouragement to ministry – how God’s Word impacts the lives of his children.