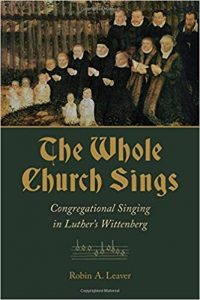 The 500th anniversary of the Lutheran Reformation has presented a panoply of scholarly and practical works for Christians to digest on the august occasion. It has also led to some soul searching in various circles. What is the right way for a congregation or synod to celebrate? How should a Lutheran church observe the anniversary of the Lutheran Reformation? Year after year, even century after century, we see a predictable pattern: when Lutherans want to celebrate, they come together to sing Luther’s hymns.

In this volume Professor Robin Leaver urges us to do more. Though each centennial has given Lutherans a renewed appreciation of their hymns, Leaver’s book provides us with something greater: an understanding of their composition, publication, and congregational use. The connection between Lutheran hymnody and Lutheran history is clear. Leaver writes, “The Reformation may have begun in 1517, but it can be argued that only after 1523, when the hymns first began to appear, did it really begin to take hold.”

Leaver begins by introducing us to the musical world in which Luther and his contemporaries lived. This introduction is helpful to readers who are familiar with the historical and theological contexts of the Reformation, but who are less familiar with 16th Century musicology. Leaver’s musical survey is well-tuned. He relates Luther’s personal experience and musical education by distinguishing the various styles which were about to change Luther’s musical world. “[Luther] had a lifelong love of and involvement with music. He was knowledgeable about it, was able to compose, and was experienced in singing with others” (28).

Having introduced us to Luther the musician, Leaver turns his attention to Luther the reformer. He surveys the historical and theological realities in Wittenberg in the years between 1517 and 1523. In this way he helps the reader appreciate how Luther’s personal crisis became a congregational crisis. Nevertheless, Leaver maintains a straightforward purpose within the historical survey, as the first five years of reformation were actually setting the stage for more important events to come. The rough-shod radicalism of Luther’s colleagues actually galvanized Luther’s principled and conservative approach to reform. The upheaval in Wittenberg was actually providing a fertile field for sensible worship and hymns.

Leaver has brought us to a vantage point where we can better appreciate the shift which took place in Lutheran congregations after 1523. “Luther was fully aware of the fundamental role that music would have to play in the introduction of new hymns into Wittenberg worship, since collectively they gave the congregation a much greater role in singing than had been the custom hitherto” (79). From this vantage point, Leaver is able to offer a rejoinder to Joseph Herl’s Worship Wars in Early Lutheranism (Oxford, 2004). At issue are the roles of clergy, choir, and congregation. To question how Luther’s hymns were sung is not unimportant. The answer reveals a great deal of Luther’s pastoral direction for the worshiping church.

For Leaver, the issues are solved by understanding the publication process of Wittenberg’s hymnals and songbooks.  “[The early winter of 1523 and the early spring of 1524] were extraordinary months in which Luther laid the foundation not only for the rich Lutheran chorale tradition that followed but also for the distinctive Protestant congregational song that was thereby launched from Wittenberg” (81). Leaver’s exploration of these months is a keen and clear demonstration of the historian’s craft. His detailed evidence (accompanied by analytical tables offered in the appendices) tells the story of a 1524 congregational hymnal—a hymnal which no longer exists.

Leaver details how such a hymnal was developed alongside a well known collection of choral arrangements by Luther’s collaborator Johann Walter. This collaboration, in Leaver’s analysis, would have led to the opposite of “Worship Wars.” He writes, “Congregation and choir sang the hymns together, almost certainly in alternation stanza by stanza, each from its own collection of hymns.” (116)

Indeed, by describing congregational singing in Luther’s Wittenberg, Leaver’s book demonstrates how a collaborative project begun in the interest of providing better hymnody led to prototypes for congregational worship services and eventually a comprehensive worship book such as the hymnals that Lutherans use today.

Leaver offers lessons for Lutherans to learn, not only as they continue to nurture worship life in their own congregations, but especially as a synod engaged in another hymnal project. “At every opportunity, Luther and his colleagues were concerned to get the whole congregation—not just part of it—involved in singing, teaching them of the need to sing the scriptural Word, giving them the text and melodies to sing, and supplying them the musical means by which an antiphony of unison and harmony graced their services of worship” (162). As Lutherans celebrate another century of their theological and musical heritage, we do well to hear Leaver’s encouragement: The Whole Church Sings.

PreviousDraw Us to Thee!
Next Four Branches August 2018