The Wit of Martin Luther

The Wit of Martin Luther 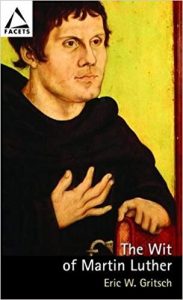 Eric W. Gritsch is Professor Emeritus of Church History at the Lutheran Theological Seminary at Gettysburg, Pennsylvania.  He has published several papers on the humor of Martin Luther, which he has used extensively in the writing of this book.

The Wit of Martin Luther sounds like the title of a Lutheran joke book.  It is not. Nor is it a collection of aphorisms and witticisms (although these are included in a short appendix).  A less elegant title for the book might very well have been: How Martin Luther Kept his Wits about Him through Extraordinary Hardships—and How You Might Do Likewise.  Gritsch hopes that, like Luther, we will not take ourselves too seriously, but learn to laugh at the sinful world’s torments and find refuge in Christ (2, 5-6).

The book is part of a series called Facets, which bills itself as “brief, brilliant treatments of vital aspects of faith and life.”  This pocket-sized volume is organized into three sections. “The Power of Serenity” shows the dramatic transformation in Luther’s personality that occurred when the Holy Spirit revealed to him the Gospel meaning of the phrase, “the righteousness of God.”  The timid young monk, who did not even want to become a professor because he was so depressed by the weight of his conscience, found peace at last. Liberated, Martin Luther did not fear to offend the opponents of the Reformation. Because Luther no longer dreaded God’s judgment, he did not fear what his opponents could do to his body or reputation.

“Wit and Witness” tells how Luther was captivated by his early tasks of lecturing on Genesis and Galatians.  It demonstrates Luther’s wit in applying scriptural wisdom to mundane life. Luther was happy to be facetious in his correspondence with Katie.  He made mistakes when he gave pastoral advice (most notoriously in the case of the bigamy of Philip of Hesse). But he was able to get past such setbacks through an awareness of his own sinfulness, the strength of Christ’s atonement, and the mystical union of Christ and the Church.  Luther’s disdain for his own body and life is demonstrated in a persistent gallows humor.

“Smiling through the Mean Meantime” unifies the book with a focus on Luther’s “eschatological humor” (77, et al.).  Luther was able to avoid much anxiety and disappointment, simply because he so doggedly avoided speculative theology.  It was not in this life—which Luther liked to call the Stündelein (102)—that Luther sought to make his home, but rather in heaven.  Luther was untroubled by Scripture’s refusal to answer every question raised by human curiosity, and this was a foundation for his poise.  It did not disturb Luther that this world is brutal and absurd: The contrast between God’s ways and the devil’s ways shines all the brighter on the canvas of human foolishness and weakness.

Gritsch’s tone is evangelical, inviting and devotional throughout.  After a lifetime of studying and teaching on Luther, Gritsch revels in the Reformer’s story.  He relishes an apt quote or anecdote from Luther’s writings or life. The Wit of Martin Luther is peppered with lengthy and memorable extracts from Luther’s Works.  Sometimes these quotes and the commentary surrounding them are repetitive (e.g., a quote on 88 is repeated verbatim on 91, and 92 features the same quote and phrasing as that found on 72-73).  Nevertheless, how many of us have a memory that is sharpening with age? Occasional repetition might not be entirely a bad thing!

Gritsch’s evenhanded, persistent joy makes his book irresistible and uplifting.  What would a good, Lutheran book be without some polemics? Indeed, polemics abound, but they are mainly the polemics of Christ versus the world, grace versus works righteousness, Christ for me versus devilish despair.  Not surprisingly, The Wit of Martin Luther is replete with citations from the Bible.  There is only one jarring blemish, when Gritsch departs from the Bible, the Lutheran Confessions, and the writings of Luther alike to wax anecdotally on his own opinion that a good work is good because of its quality, rather than because it finds its inception and completion in the only One who is truly good (65-66).  However, neither false doctrine nor subjective digression is characteristic of the book. Like Luther, Gritsch delights in Christ, and he is keen always to highlight how Jesus helped Luther through dark days and lifted him up to a place of freedom, joy and confidence through the unchained Means of Grace.

The Wit of Martin Luther is an excellent springboard for diving into the depths of Luther’s writings.  Because it is both a short read and a rich sampling of writings from throughout Luther’s career, this book stimulates an interest to look further.  If the reader has access to either the Weimar or English editions of Luther’s Works, it’s a good idea to have them handy. If a layperson is reading the book, it might well inspire him to read Luther’s Works.  Make no mistake: The Wit of Martin Luther is for laymen, staff ministers, teachers, and pastors alike.  Luther’s comments on his own Anfechtungen hit home for a pastor, who does the same job Luther did.  But Anfechtung is characteristic of every Christian life.  The pastor’s task is to take this book and put it into the hands of that hungry member, or of that searcher who tries out the church and wonders, “What’s all this about Martin Luther, then?”  The pastor’s job is to put this book in the church library, to make people aware of it, and to share it with the elders or the faculty. The Wit of Martin Luther is an amuse-bouche:  You can consume it quickly and guilt-free, and it makes you hungry for more.

Although this is not a Lutheran joke book, it can be funny in places.  Try not to grin as you encounter such episodes as Cranach’s ten caricature woodcuts aimed at the pope (36), Luther and Bugenhagen playing the part of German boors for an opponent visiting from Italy (27-28), or Luther’s list of the relics to be found in Mainz (29).  Laugh along with Luther as he pokes fun at high church liturgical showmanship, yet tempers his criticism with the reminder that one should not get too upset about such things (59-60). The Wit of Martin Luther is neither scatological nor sexy—but such nuggets are not entirely missing.  In the book, you will read Luther on topics as diverse as indigestion, wine, and praying like his pet dog.

The Wit of Martin Luther is a serious read, but only if you read it the wrong way.  Yet it is not lightweight. It is lighthearted. And it lightens the heart with a positive, Christ-centered remedy to the hardships of Luther and of every Christian.  With its approachable size and style, The Wit of Martin Luther invites you to take it along as vacation reading—or simply if you feel like you need a vacation.  The book is unprepossessing, yet rich. It punches far above its weight.