Theologians You Should Know

Theologians You Should Know 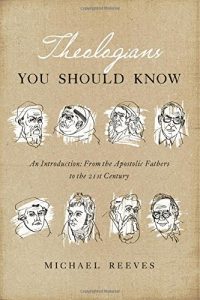 Michael Reeves (PhD, King’s College, London) is president and professor of theology at Union School of Theology in Oxford. He is the author of Delighting in the Trinity, Rejoicing in Christ, and The Unquenchable Flame: Discovering the Heart of the Reformation.

The treatment of history often encounters two possible pitfalls: failing to fully grasp history’s impact in shaping today’s present or promulgating unfounded narrative. In Theologians You Should Know, Michael Reeves guides the reader away from both dangers (13,15). Through a series of introductions, Reeves strives to make seemingly daunting theologians accessible (15).

This aim gives purpose for the book’s layout. Theologians You Should Know contains thirteen chapters with each chapter (approximately twenty-five pages in length) treating a single theologian. Within the chapter is a brief biography of the theologian, a summary of his religious thought and work(s), a listing of additional resources for further study (both primary and secondary), and a timeline of the theologian’s life and achievements. This format gives the reader confidence to study primary sources, while at the same time gaining a glimpse of Christian thought throughout the centuries (16).

In this effort to instill confidence, Reeves limits his selection to theologians who are “influential or significant especially for the English-speaking world” (17). Therefore, the reader will not find theologians like Origen, Palamas, Johann Gerhard, John Bunyan, or John Wesley.

Chapter one introduces the Apostolic Fathers Papias, Clement of Rome, Ignatius of Antioch, Polycarp of Smyrna, as well as the popular writings, The Didache, The Shepherd of Hermas, the Letter to Diognetus, and the Letter of Barnabas. These early fathers combat Docetism (24) and paganism (31) and offer counsel for apostasy (26).

Chapter two addresses second century apologists, Justin Martyr and Irenaeus. Reeves treats Justin’s First and Second Apology against the paganism of Rome (38) and Irenaeus’ Against Heresies, which deals with the Gnostic heresy (48).

Here, Reeves, perhaps unintentionally and unaware, reveals a subtle shift in theological thinking. No longer did the individual solely rely on God’s Word, but human reason began taking center stage. For example, consider Irenaeus’ two statements: “Just as God appointed a monster to swallow Jonah for a time, so he ordained Satan to swallow up humanity in death for a time” (52) and “Humanity was subjected to death so that God might have mercy… and the final victory of Christ” (53). Finally, recognizing the possible financial limitations of the reader, Reeves offers (and recommends) free access to ancient works online.

Chapter three gives attention to Athanasius— his immoral youth, conversion, and leadership through the Nicean controversy. Several footnotes clarify customs of the day. For example, the Arians set their error to melody, but orthodox choirs silenced the errors (through song, of course) (60). Reeves summarizes the Arian controversy and Athanasius’ teaching of the immutability of the Logos.

Augustine appears in chapter four. Here, the reader confronts some significant heresies: Manichaeism, Donatism, and Pelagianism. These ‘–isms’ might intimidate some, but Reeves’ simple definitions prove helpful. “Manichaeism: hatred of the physical” (93) and
“Donatism: separating Christ into two distinct persons, but gluing him together as though two boards” (95).

Chapter five introduces Anselm and his method for presenting a defense for the existence of God without using the Word (108). Anselm can dive into some deep philosophical waters, but Reeves holds the reader afloat with helpful summaries. For example, “It is love of God that seeks to know God. That is faith seeking understanding” (108) and “Anselm [spends time] arguing that such contradictions are only apparent” (114). Perhaps most beneficial is Reeves’ list of newer, easier-to-read biographies of Anselm (124).

Chapter six treats Thomas Aquinas. He handled Scripture through two senses: the literal and the spiritual (129). Using rational argument, Aquinas claims “since God is holy, man must be holy” (139) and man attains this virtue through the Mosaic Law and God’s grace which “enables us to merit eternal life” (140). His thought helps defend the Roman Catholic teaching of transubstantiation, ultimately making him “the authority” on the subject (146).

An interlude opens chapter seven. Reeves acknowledges that twelve-hundred years of Biblical interpretation would be radically altered through the ministry of Martin Luther (149). The reader explores the Heidelberg Disputation, Treatise on Good Works, To the Christian Nobility of the German Nation, The Babylonian Captivity of the Church, The Freedom of the Christian, and The Bondage of the Will. Reeves also offers a brief, unbiased summary on Luther’s controversial work: On the Jews and Their Lies (157).

Luther’s great counterpart, John Calvin, appears in chapter eight. Reeves details Calvin’s rise among Swiss reformers and his government protection from persecution. Under such protection, Calvin writes Institutes of the Christian Religion which dissects the Apostle’s Creed and explains how an individual knows God from Scripture, knows Jesus as Savior, and receives his benefit through faith (186). This work also introduces Calvin’s theology on predestination: “God, in his free pleasure, rather than on the basis of anything in individuals, chooses to predestine some to salvation and others to damnation” (195).

Chapter nine handles British Theologian, John Owen. Perhaps an unfamiliar name, Reeves presents Owen as a teacher of the Trinity. Owens “believed that God’s triune being places all studies of his ways under one of two governing ‘heads’: Christology […] and pneumatology” (207). An individual receives faith through Christ alone (215) and the Holy Spirit truly renews a man inwardly (219). Owen also taught the Christian’s right to interpret the Bible without aid of a pope and without depending on external arguments (222-223).

Chapter ten outlines the life and ministry of influential American theologian, Jonathan Edwards. Reeves cautions the reader against identifying Edwards only by his now-infamous sermon: “Sinner in the Hands of an Angry God” (227). According to Reeves, such preaching expressed a desire to communicate doctrine so thoroughly that Edwards’ hearers felt the reality of the truths in question (231). Religious Affections affirms this view. It stresses the need for religious experience but warns against misinterpreting such experiences (234). A History of the Work of Redemption expounds how God shares his love (243).

Friedrich Schleiermacher, nicknamed ‘The Father of Liberalism,’ appears in chapter eleven. Although Schleiermacher was a complex and deep thinker (254), Reeves aptly summarizes his theology as “wanting to restate the Christian faith in such a way that traditional Christianity could be made both credible and relevant to the modern age” (259). This includes an overview of Schleiermacher’s great work: The Christian Faith.

Chapter twelve presents Karl Barth and his major work, Church Dogmatics. In writing, Barth attempts to reveal God through discussion of the Trinity (281). He rejected natural theology and spoke of the Trinity not as ‘persons,’ but as three ‘ways of being’ (283). Reeves dissects Barth’s enormous work: book by book, chapter by chapter, even including a table laying out how various themes are interrelated (290).

The final chapter discusses still-living theologian James Innell Packer. Reeves summarizes his thought as “modern-day Puritan” and “thoroughgoing Calvinist” (303). His books, ‘Fundamentalism’ and the Word of God places the role of reason as a tool to receive the Word, but not used as the source of truth (307). A Quest for Godliness (also titled, Among God’s Giants) explains how the Puritan’s pursuit for holiness shaped much of Packer’s theology (308). Knowing God aims to lead its readers to trust in God personally (310), and What Did the Cross Achieve? sought to clarify the atonement (311).

This reviewer is of the opinion that Reeves successfully meets his objective in writing Theologians You Should Know. Each biography aids the reader in understanding the age in which each theologian lived, as well as how the era shaped his theology. Second, Reeves summarizes the primary theology of each theologian without delving too deeply into such teachings. He does not allow his personal beliefs to color what each theologian taught, nor did he insert much of his own commentary. (He only interjects when attempting to clarify the reason a theologian said what he did.) Listing additional works not treated proves quite helpful for further research.

This reviewer appreciates resources for conference papers, preparing Bible Class, answering parishioner questions, or directing a parishioner to further study. Theologians You Should Know offers such a resource.

If time does not allow the Pastor to read through volumes of works (e.g., Barth, Christian Dogmatics) to understand a theologian, this book provides an adequate introduction. If a Pastor desires further study, this book lends advice for noteworthy works, as well as how to obtain such works. If a Pastor fears treading into the intellectual depth of a theologian, this book holds the reader’s hand through the information. (This self-admittedly slow reader could handle each chapter in fifteen minutes of reading.) This introduction offers an easy read that better acquaints a Pastor with what was forgotten or with what was once unknown.

Studying millennia of names, places, events, and theologies can prove intimidating, but may prove even more daunting when remembering such information while carrying on full-time pastoral ministry. Theologians You Should Know offers reasonable assistance in the Pastor’s remembering leading theologians and theologies. Those wishing to remain close to the Church Fathers will find a safe trailhead leading to an unending wealth of information.