Wired for Intimacy: How Pornography Hijacks the Male Brain

Wired for Intimacy: How Pornography Hijacks the Male Brain 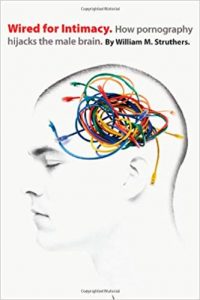 William Struthers is an associate professor of psychology at Wheaton College in Wheaton, Illinois. He received his Ph.D. from the University of Illinois at Chicago. He teaches courses on behavioral neuroscience, men and addictions, and the biological basis of behavior.

The main purpose of Wired for Intimacy is to 1) explain how pornography affects the male brain and then 2) determine what Christians can do about that effect. Struthers makes use of his own extensive research, clinical experience, and some biblical insights to create a resource for those struggling with pornography.

Chapter one is a general critique of our culture that is saturated with porn: “The estimated financial size of the worldwide sex industry is around $57 billion, with $12 billion (just over 20 percent) coming from the United States” (20). Struthers gives his perspective on why pornography is so spiritually damaging. “As a person of faith, I believe that pornography is a medium that degrades both men and women while offering the lie of on-demand sexual fulfillment, primarily to men… Pornography takes human sexuality out of its natural context – intimacy between two human beings – and makes it a product to be bought and sold” (19). Struthers highlights the way the internet has made this spiritual danger more prevalent. He points out the three “A’s” of the Internet: accessibility, affordability, and anonymity (33).

Chapter two walks through the way that pornography corrupts the intimacy that men and women both crave. Struthers says this happens, in part, because those who view pornography “are neurologically training themselves to respond to the type of images they view… The way that a male brain is organized in being one-track, goal-oriented and visuospatial (mentally manipulating objects) make it the perfect playground for sexual fantasy – the mental consumption of another’s sexuality” (44). The intimacy between husband and wife is lost when the man is subconsciously taught to evaluate “the staged intimacy between two performers (not himself and his wife) against his sexual relations with his wife. He cannot be fully present; he is assessing his ‘performance.’ Intimacy in marriage is further corrupted by the man measuring the woman he is with (whom he should be focused on) against the woman on the screen” (60).

Chapter four is a detailed explanation of the massive changes taking place in a man’s brain as he looks at pornography. “Like a path is created in the woods with each successive hiker, so do the neural paths set the course for the next time an erotic image is viewed. Over time these neural paths become wider as they are repeatedly traveled with each exposure to pornography. They become the automatic pathway through which interactions with women are routed. The neural circuitry anchors this process solidly in the brain. With each lingering stare, pornography deepens a Grand Canyon-like gorge in the brain through which images of women are destined to flow” (85). Struthers says this carries over into daily interactions with women as “objectifying of women, looking at their “parts” and evaluating them as potential sexual partners has become reflexive” (48). The chapter includes information on the role that sections of the brain and chemicals play in the sexual experience.

Chapter five begins the second half of the book, in which Struthers describes a path toward healthy masculinity and sexuality. Here Struthers offers what he describes as three prominent Christians views on the image of God. He chooses a relational model, in which that image of God is defined as the ideal way God wants us to interact with our fellow human beings. This chapter concludes with some science-heavy information about how one’s masculinity is impacted during prenatal development.

Chapter six is essentially a critique of how our culture’s view of masculinity is unhelpful to men because it prevents them from exploring, understanding, and properly expressing emotion. Struthers strongly urges fathers to take a leadership role in teaching their sons emotional mastery and respect for women. Struthers points to a desire for power over women as a key reason why young men turn to pornography. Ultimately, Struthers holds up Jesus as the ultimate role model for masculinity because “in Jesus’ humanity we see the perfect combination of the categories that many culturally define as masculine (strength, righteousness, rationality) and feminine (tenderness and compassion)” (154).

Chapters seven and eight both discuss male intimacy in the context of sanctification. For Struthers, a proper view of this intimacy is a key to understanding the transcendence of God more clearly. This is reflective of the views on the image of God mentioned above. “As we bear the image of God rightly – loving each other according to his commands and directing our sexuality in accordance with Scripture – the intimacy that a man and a woman have builds toward perfect intimacy. This maturing intimacy bears the realities of our post-Fall condition, but is a sign of God’s transforming power to overcome that condition” (164). He also shares thoughts for single people battling porn addiction, which revolve around finding a spiritual mentor who will hold you accountable. He concludes with spiritual guidance for those recovering from a struggle with pornography. This process could be summarized as confession, identifying where the problem started, and challenging yourself to be better with the help of a fellow Christian or trained counselor.

Struthers accomplished very well his first goal, namely, explaining the effect of pornography. His grasp of neuroscience is very clear, as evidenced by the detailed descriptions of the brain’s compositions and its typical responses to stimuli. I found that aspect of the book extremely interesting and helpful.

I do not believe, however, that Struthers fully accomplished his second goal, i.e. giving a path forward. A major part of the deficiencies here stem from his theology. Despite some comments on the sin involved in pornography, Struthers’ advice suggests that he views the solution as more of a psychological issue than a spiritual one. His understanding of sanctification seems largely divorced from the means of grace. For instance, his ultimate plan for recovery does not include any direct instruction for using Scripture. After confessing your sin and brokenness, the Gospel is skipped and the “the next step is to assess what is at the root of the problem. This entails finding the reasons that you act out. It is an educational process whereby a man can be enlightened of his condition. This is best done as a historical analysis of his sexual and relational history” (181). To his credit, Struthers did make it clear that there is “no sin that the blood of Jesus Christ is unable to cleanse” (175). That truth, demonstrated from Scripture, should have a central role in someone’s recovery from this struggle. Instead, Struthers seems to direct the sinner to their own internal resolve and the encouragement of a fellow Christian.

His views on the image of God also came across as muddled. At one point Struthers quoted Colossians 1:15 and explicitly said that Jesus was the image of God. At another point he said, “By understanding our purpose in this life and by demonstrating and experiencing God’s love, we are conformed to the image of Christ” (189). Again, this was not tied to any means of grace. More often, however, he spoke as though transcendence through intimacy were essentially what God wanted to communicate about the image of God. “This relational capacity is best seen in our sexuality, the interaction of male and female, which together constitute the image of God” (119). Since this relational concept of the image of God is a big key to Struthers’ advice, it made the whole approach weaker.

This book could still be beneficial for the pastor who is looking to better understand and counsel members who are struggling with pornography. The scientific information is very useful in grasping what makes pornography appealing and addictive. I also appreciated the author’s thoughts on how we teach masculinity to the next generation. His insights bear some deeper consideration, as we consider how to raise godly and responsible young men.

I would not feel comfortable recommending this book to anyone who is personally struggling with pornography, however, due to its failure in directing people to Word and sacraments for true strength and recovery. My fear is that the individual would earnestly follow the approach described here, only to experience frustration and blame God for the failure.

Again to recap: the major strengths of this book were its unique neuroscientific insights and its help in understanding how pornography can become an all-consuming issue even for someone who believes they are using it casually. The major weakness of this work was the absence of encouragement towards the means of grace, particularly the gospel.

PreviousLord, Grant That I in Ev’ry Place May Glorify Your Lavish Grace!
Next Preach the Word – March/April