Wittenberg vs. Geneva: A Biblical Bout in Seven Rounds on the Doctrines that Divide 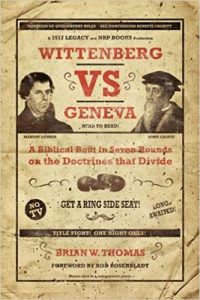 Brian William Thomas is a pastor at Grace Lutheran Church (LC-MS) in San Diego, CA. He formerly served as a naval officer. He is a graduate of Christ College in Irvine, CA and Concordia Seminary. This is his first published book, and he is a regular contributor of online articles to 1517.org.

“You can’t judge a book by its cover.” But, oh, what a cover on this one! Designed as an old-timey boxing match poster, it prepares you for an exciting spectacle of theological pugilism. However, the spirit of this contest is not reckless violence but a measured and orderly test of strength. The author wants his audience to witness a fair fight.

Brian Thomas is a former Calvinist (Presbyterian), who became a Lutheran pastor, which makes him uniquely qualified to present both sides. In one corner are confessional Lutherans, and in the other, “Reformed writers who are not only popular as respected within their own circles but are confessionally faithful to classic Calvinism” (xii). It is a blessing that both sides agree on fundamental hermeneutical principles. This levels the playing field, so that the key question is: “Which applies these principles faithfully and consistently” (xiii)?

Seven chapters (rounds) cover the key points of contention. Bible passages used by either side to support their teachings are the starting point, and the ultimate authority, in each round.

Chapter 1 (“Round 1”) is titled, “Atonement: For Whom Did Christ Die?” There are many passages which bluntly say that Christ died for the world, or for all. He works through examples of how Calvinists have done violence to the text in order to uphold the logic of their system of theology. One of their key hang-ups is the insistence that “anyone who argues for unlimited atonement makes salvation only potential or possible, but never actual” (11). The Lutheran distinction between objective and subjective justification, based on Scripture’s clear proclamation of both, gets us past that hang-up. Lutherans gladly sacrifice logic to Scripture, noting the dangerous implications of limited atonement: 1) “the uncertainty it places upon the believer,” and 2) being “directed away from the objective means of grace – Word and Sacrament – to the effects of faith… faith is turned upon itself, leading many to pietism or despair” (14-15).

There are actually some points of agreement to rejoice over in Round 2: “Predestination: Double, Double, Toil and Trouble.” Both sides emphasize that God is not the cause of sin and stand united against synergism (18). Lutherans are cautioned not to misrepresent Calvin as being obsessed with this doctrine or to simplify the Calvinistic view of double predestination (21-22). The rest of this round focuses on Romans 9:6-24, examining both the overall context and the critical phrases. The teaching of double predestination, which relies so heavily on these verses, nevertheless does not find any firm footing here.

“The Sacramental Word: An Introduction to Sacramental Thought” (Round 3) lays the necessary groundwork for understanding much of the rest of this fight. The author issues appropriate cautions against confusion caused by terminology and seeks to establish the vocabulary. Both sides recognize the oral and scriptural Word as how God brings forgiveness to people, but the sides are divided on the significance of the sacramental Word (44). The division has much to do with the use of the word “sign” in the context of the sacraments. The Reformed follow St. Augustine in his use of this ecclesiastical term and end up “depreciat[ing] the sacraments… by tearing the Spirit asunder from the sacramental Word.” (49) The underlying problem is the separation of the spiritual and the visible – a tendency of the Reformed in many areas. This is a false separation to use with the sacraments (53).

The key issue in Round 4, “Baptism Saves: The Washing of Water with the Word,” is the role of this sacrament in salvation. Confessional Calvinists and Lutherans agree that baptism is important for the church’s mission, it is for people of all ages, and no specific mode of application of the water is commanded. But Calvinists insist that baptism is a sign that points beyond itself to salvation only found in the oral or scriptural Word. Lutherans point to the long list of passages which clearly say that baptism saves. It is the type of sign that points to a present reality (63-64).

Round 5 is something of a tangent: “The Lord’s Supper – Part I: The Personal Union of the Two Natures in Christ.” Exploring the interplay between Christology and the Lord’s Supper is only necessary because that is how the Calvinists arrive at their faulty definition of the real presence. Lutherans simply trust that Christ is where he has told us to find him (97). Thomas does explain the three Lutheran classifications of passages which describe the communication of attributes, to show how the saying, “the finite cannot contain the infinite,” does not apply to the person of Christ.

Round 6: “The Lord’s Supper – Part II: Christ’s Promise, Presence, and Pardon” gets to the simple words of Christ and St. Paul to dismantle arguments for figurative interpretation. Yet the nuance of Calvin’s position still receives a close look. He and his followers do say that Christ is really present – not in the bread and wine, but in our hearts through faith. “By the power of the Holy Spirit the believer mystically ascends to heaven to commune there with Christ” (125). However, the presence of Christ’s body and blood in the sacrament depends on his promise, not a person’s faith. Therefore, the question of what unbelievers receive in the sacrament is a critical test.

Thomas keeps looking to Scripture to determine the winner of this bout in the last round: “Kept in the True Faith: Apostasy and Assurance.” A detailed section on the warnings in Hebrews 6:4-6 shows they are not hypothetical, nor directed to false believers (137-146). “How then can people resist and reject God’s grace if God is the one doing all the saving” (148)? Calvinists cannot live with that tension, but Lutherans do because Scripture clearly proclaims both truths. Thomas shares an interesting Lutheran summary of this issue: “When God works through means, he can be resisted; when God operates without means, in his uncovered majesty, he cannot be resisted. (148)” The Lutheran approach directs people to find assurance of salvation in what God has revealed, instead of what he has kept hidden (155).

Thomas does a careful job of not misrepresenting Calvinist teaching, yet he does not hesitate to throw biblical haymakers. His extensive bibliography (which includes some WELS authors) and frequent citations of theologians from both sides confirm that this work is much more than a mere series of blog posts. Through it all, his tone is not vengeful. It is refreshing to hear a voice that has come from one side to the other and explains why in a gracious way.[1]

There are a few question marks in the margins of my copy. Is his dating of Ezekiel’s prophecy a typo – “four hundred years” (59) before Christ, instead of six? Taking the lead from LC-MS Pastor Peter Bender, he uses the story of Naaman to make some points about baptism, which seems questionable – shouldn’t we get our doctrine of baptism only from passages that are about baptism and its blessings? I did have to go back and check his exegesis of Ephesians 5:26, and after further review, his suggestion that Paul references the baptismal formula here makes sense (88).

Even if you do not engage with many Calvinists in your ministry, this book will be useful for highlighting the unique, solidly biblical stance of our Lutheran teaching. It is aimed at biblically literate Christians, but more accurately hits the mark with highly biblically literate Christians. This specific exercise in comparative theology is very useful. It will help guard against human reason, which can rob hearts of the comfort found in the simple gospel.

[1] Recently, I was surprised to hear another voice on the same subject with a similar tone: the rap artist FLAME, in his new EP called Extra Nos. Check it out on YouTube.

Previous“God, I Thank You That…”
Next Four Branches – February 2020