Bach: Music in the Castle of Heaven

Bach: Music in the Castle of Heaven 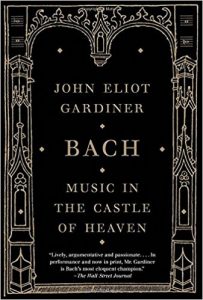 Sir John Eliot Gardiner is one of the world’s leading conductors. He is particularly well-known known for his work with Baroque music, especially the music of Johann Sebastian Bach. He founded the Monteverdi Choir and Orchestra, the English Baroque Soloists, the Orchestre de l’Opéra de Lyon, and the Orchestre de Révolutionnaire et Romantique. He has recorded over 250 albums and currently serves as the president of the Bach-Archiv Leipzig.

There is a story told from India of a group of blind men who come upon an elephant and touch it to find out what it is like. Each blind man touches a different part of the elephant and thinks that what he feels (e.g. the tusk, the side, the tail) is what the elephant is actually like. Each is so convinced of what he has “discovered” that when the blind men come back together, none of them can agree. In the end, none of them could describe what an elephant is really like because each focused so much on the parts.

John Eliot Gardiner’s Bach: Music in the Castle of Heaven is in many ways like the story of the blind men and the elephant. Gardiner is a world-renowned expert on Bach’s music. So when he describes Bach’s music or his texts from Scripture or Lutheran hymnody, Gardiner “describes the elephant” in beautiful ways that only one who has spent countless hours with Bach’s music could describe. His descriptions make you want to listen to Bach’s music and meditate on it, to ponder the glorious Scriptural truths and beautiful Lutheran poetry he puts to music. Gardiner’s descriptions of Bach’s musical works make you want to listen through this book.

Yet, when Gardiner takes on the life of Bach, particularly when he tries to fill in biographical gaps left by centuries of silence or when he speaks of Bach’s spirituality, he proves to be a “blind man” who struggles to describe what he himself does not personally know. One gets the impression that Gardiner is a secularist¹, who has had fleeting contact with the Word of God and therefore has little understanding of God’s Word; and who typically gives the impression that the glorious Scriptural truths portrayed in Bach’s musical works are something he views from the outside looking in. Occasionally like the blind men, he gets a correct description in part of Scripture’s beauty put to heavenly music, but many of his historical and theological conclusions seem off base to the confessional Lutheran reader. It does not help that he takes a negative view towards Orthodox, Evangelical Lutheranism.

Gardiner is a musician—an expert on the musical works of Johann Sebastian Bach. He is an engaging writer with a fascinating narrative style that makes for easy reading, but he is no historian. This historical and musical dissonance comes across throughout Bach: Music in the Castle of Heaven, which can be frustrating to a thoughtful, Lutheran reader.

One of the greatest challenges for any historian trying to tackle the life and work of Johann Sebastian Bach is the fact that Bach left so little in the way of personal diaries and intimate family correspondence. Much of his surviving correspondence is of a professional nature. Bach was also reluctant to reveal much about himself or his thoughts. The resource that has served as the basis for many biographical works—the Nekrolog—was written by Bach’s sons four years after his death. Not unlike modern obituaries, they did their best to portray their father in the best light. That is why Gardiner admits in the preface, “Bach the musician is an unfathomable genius; Bach the man is all too obviously flawed, disappointingly ordinary and in many ways still invisible to us” (xxv).

Gardiner attempts to reveal what is behind the curtain—to deconstruct the myth of Bach and reconstruct the real Bach—with a modest attempt at digging into other primary sources from school and town records in locations where Bach lived or worked.² Unfortunately, the early records rarely refer to Bach himself and meeting minutes can only say so much. To fill in the gaps, Gardiner speculates freely whether in reference wherever there may be a gap in Bach’s biography from what Bach was really like as a student to what he was really thinking when he took on different positions in different locations. Admittedly, Gardiner does do a fine job of demonstrating that Bach was in many ways, a flawed, ordinary sinful human being just like the rest of us and not the legend by which he has so often been portrayed since his death in 1750. However, Gardiner usually fails to acknowledge how Bach understood that he was simul justus et peccator who leaned completely on the grace of God in Christ—a point often reflected in Bach’s musical works.

Now a Lutheran pastor might rightfully ask, “If Gardiner is such a poor historian, then what good is this book?” In answer to that question, one simply needs to read his chapters on the musical works of Bach, especially chapters 6-13, to see the true value that Bach: Music in the Castle of Heaven has for theological readers. While Gardiner may be an outsider looking in theologically speaking, he is still an expert on the musical works of Johann Sebastian Bach, in particular Bach’s cantatas and other choral works. At times, Bach’s musical expression of Scriptural truths or of Lutheran hymnody is so clear that even a bumbling interpreter like Gardiner cannot get in the way. For example, Chapter 9 – Cycles and Seasons is a fascinating discussion and history of Bach’s cantata cycles. Gardiner does do a great service to his readers by providing BWV references for each work making them much easier to find from the Bach catalogue of music. Gardiner’s discussions of Bach’s Passions—especially his St. John’s Passion—were particularly interesting to this reviewer, and his discussion of the history behind Bach’s Mass in B minor is fascinating. Even Gardiner’s look at how Bach viewed music and language in Chapter 12 – Collision and Collusion is worth a read simply to see a clear example of how Bach was a sinner and yet a saint even as a composer.³

The book also has a solid, detailed chronology, an excellent (and helpful!) glossary, beautiful illustrations and photos, and an index for the reader.

Is this a book that pastors should have on their shelves? Historically speaking, a work like Christoph Wolff’s Johann Sebastian Bach: The Learned Musician would be a better Bach biography. Musically speaking, however, a pastor could find great value in the exposition on Bach’s musical works that Gardiner brings out from his personal experience with the works themselves. As long as you recognize Gardiner’s secular worldview in his interpretations, Bach: Music in the Castle of Heaven could be a worthwhile addition in a pastor’s library.

Tags:Bach, Biography, Music
PreviousFour Branches May 2018
Next Betrayal: German Churches and the Holocaust