Betrayal: German Churches and the Holocaust

Betrayal: German Churches and the Holocaust 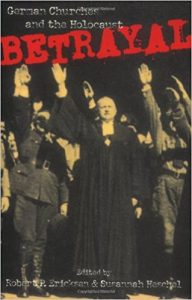 Robert P. Ericksen is Professor of History at Pacific Lutheran University and author of Complicity in the Holocaust: Churches and Universities in Nazi Germany (2012) and Theologians under Hitler: Gerhard Kittel, Paul Althaus and Emanuel Hirsch (1985).

Susannah Heschel is Eli Black Professor of Jewish Studies at Dartmouth College. Her scholarship focuses on Jewish-Christian relations in Germany during the 19th and 20th centuries, the history of biblical scholarship, and the history of anti-Semitism.

When it comes to Christian churches in Germany and the Holocaust, some may assume that the Nazi regime was so intimidating and powerful that any sort of resistance to it would prove fatal. Others may argue that the state church situation complicated matters, so we should not jump to conclusions about the church’s role in the Holocaust. Betrayal presents an altogether different view. “The contention of this book is that the German churches played a far more important role in Nazi atrocities than has hitherto been supposed” (4).

Betrayal is a compilation of nine essays, three of which are written by the editors. The rest of the contributors have been professors at various universities and have demonstrated scholarship regarding Jewish-Christian relations in the 20th century. The essays cover a variety of topics, including common Christian views about Judaism; the influence of prominent German theologians on anti-Semitic attitudes; the “German-Christian” movement; reinterpreting Jesus as Aryan; a re-evaluation of Dietrich Bonhoeffer; the Confessing Church’s role in Nazi Germany; and the reactions or lack thereof of the papacy and Catholicism to anti-Semitism.

The essays set the historical context well. By 1930, Germany was ripe for the National Socialist movement that Hitler sought to establish. The church’s vision for society aligned to a large degree with Hitler’s: “The Catholic and Protestant churches both fervently opposed godless communism, and Hitler professed himself the most powerful anticommunist in Germany. Christians tended to be stridently antimodern, rejecting the modern tendencies toward urban, secular culture that had begun to permeate Germany in the 1920s. They did not like the fast lifestyle of the roaring twenties or the open, democratic practices of Weimar Germany, which advocated freedom of speech and belief and practiced tolerance toward the culturally diverse” (11).

Early on, prominent German theologians such as Paul Althaus and Emanuel Hirsch spoke of Hitler’s rise to power in glowing terms (24, 26). They advocated for the racial ideals of a ‘German Volk’ which were culturally one-dimensional. “When [Althaus, Hirsch and Hitler] spoke of God’s special concern for the German Volk, when they claimed God’s endorsement of those committed to ‘save’ Germany, they fully accepted the anti-Semitic Nazi idea that there existed an underlying ‘Jewish question.’ Jews could not be a part of the rebuilding process. The true German Volk was an Aryan, Christian community. Jews were the problem, or at least a big part of the problem, and not a part of the solution” (28). How far did the influence of Althaus, Hirsch and other theologians who shared their convictions reach?

Such an historical context helps us understand the German Christian movement which was much more nationalistic than it was confessional. “The German Christians liked to claim that their mission was not to create a new Christianity, but to provide a Christianity appropriate to the German people” (76). This movement attempted to dejudaize the church by removing non-Aryans from the clergy, rejecting the Old Testament and reinterpreting the New, and purging church music of anything that sounded Jewish (50ff). Jesus was often depicted not as descending of Jewish origin, but of Galilean, thereby proving that he was Aryan. To promote anti-Semitism, some scholars even cast Jesus as the “great enemy of the Jews” and used his denunciation of Pharisaism and legalism as their support (29ff, 56, 77).

But what about the Confessing Church, which was much more theologically grounded? Wasn’t it a voice of resistance to persecution and injustices against the Jews? Was that even its responsibility? Didn’t it oppose the German Christian movement with all of its theological recklessness? One essayist maintained that the situation wasn’t so simple: “For all their irresponsible enthusiasm, the German Christians seemed to represent the revitalization of parish life because they appeared to draw nominal Protestants back to the church. Finally, National Socialism reinvented itself as the guardian of the ‘traditional’ family and morality against the cultural liberalization of the Weimar era” (94).

The situation in Germany had reached a point where the role of the church needed to be clearly defined. This led to the formation of the Pastor’s Emergency League in 1933. “According to the League, revitalizing the church could only come from preaching the word of God as revealed in Scripture and the Reformation confessions” (96). As the Confessing Church became focused toward this end, it didn’t address the many injustices against Jews, and in the opinions of many, continued to promote a sort of soft anti-Semitism to which the Christian church had historically held (99ff).

A bright spot for the Confessing Church was the collaboration between Bonhoeffer and Sasse on the Bethel Confession, which was intended to “force a confrontation with the German Christians over the intrusion of racist, nationalistic ideology into the traditional Lutheran theology of the church” (118). The confession was later edited and toned down so much that Bonhoeffer refused to sign the final revision. To his credit, Bonhoeffer remained committed to “building up the Confessing Church as the true church of Jesus Christ in Germany, in opposition to the national church” which he did by returning to Germany from England to run a seminary (121). However, the Confessing Church as a whole remained indifferent to the atrocities carried out against the Jewish people.

Two essays deal with the response of the Catholic Church and the papacy to the persecution of the Jews. The following quotations summarize that response, “One is inclined to conclude that [Pius XII] and his advisors – influenced by the long tradition of moderate anti-Semitism so widely accepted in Vatican circles – did not view the plight of the Jews with a real sense of urgency and moral outrage” (148). Then an influential Catholic scholar named Joseph Lortz, much like the German Christian movement, saw great opportunity for the church to reassert its prominence in society through the ideals of National Socialism. “National Socialism, in his view, was compatible with Catholicism in its attack on both liberal principles and subjective relativism, and it was an ally in the restoration of a social framework more conducive to the work of the church” (162).

The final essay explores Jewish-Christian relations in postwar Germany. How has the Holocaust shaped Germany and prevailing attitudes toward Jews? What attempts are being made to revise a theological tradition that has a history of being very critical of Jewish life and practice? In the wake of silence and little to no public condemnation by the church of what took place in Nazi Germany, the essayist asserts, “Only when Protestant piety confronted the historical reality of industrial mass murder did there emerge a new impulse in theological thought” (173).

Many helpful takeaways for ministry can be gleaned from this book. First, all sorts of problems occur when culture shapes theology, rather than theology shaping culture. As wonderful as ethnic heritage can be, and as impossible as it is not to be shaped by it, there will always be the temptation to see our particular tribe as “the tribe.” That is true for both Jew and Gentile. Such a worldview breeds racism, jealousy, hatred, and suspicion. It undercuts the gospel and replaces it with “tradition”.

Next, some of the themes in the book raise the questions: When, if ever, does the church publicly address social injustice? Should pastors preach about injustice from the pulpit? If so, what will be their goal? If a brother pastor who ministers in a community where people are treated unjustly addresses it publicly, should I encourage or rebuke him? These and many other questions arise as the situation in Nazi Germany leads us to revisit the doctrine of the two kingdoms.

Another takeaway for local parishes and Christians to consider is the establishment of relations with people in our communities who are not like us. How are we perceived in our community? What opportunities are there to dispel biased perceptions about Christianity? How do we strive toward that end? Is our parish so steeped in a particular ethnic heritage that certain groups of people see themselves as excluded?

This book’s strengths are that it familiarizes the reader with the historical context of the Holocaust and the appeal of Hitler’s ideals to the German people. It takes a very critical look at the church’s contribution to the Holocaust and its failure to publicly condemn it. The essays are well documented. They reference the most current historical scholarship available at the time they were written. The predominating value of the book is that it leads the reader to confront cultural biases and their negative impact on gospel ministry.