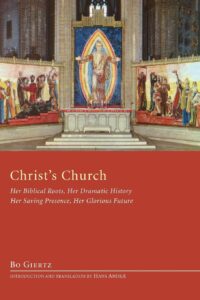 From the back cover: Bo Giertz (1905-1998), Bishop of Gothenburg in the Lutheran Church of Sweden, was voted the most influential Swedish church leader during the 1900s. He penned no less than thirty books. Christ’s Church was his first, written at the age of thirty-three.

We know Bo Giertz, if we know him at all, mostly for his novel The Hammer of God. If you don’t know that, stop reading, order a copy from Amazon, and then finish this review.

Giertz is the Swedish version of C.S. Lewis. Born to atheist and agnostic parents, he himself went from atheism to Christianity when he encountered faithful Christians in college. This led him to study theology and desire to be a pastor, which he got to do for decades. He served as a pastor, a bishop, a participant in world Lutheranism, but also an author with over one million books in print and countless articles, interviews, and weekly exegetical notes.

His life took a turn in the 1950s when the Church of Sweden approved the ordination of women and he, alone among the bishops, stood in opposition. This hung around his neck for the rest of his life.

The Hammer of God (for which he is most well-known; a best-seller in Sweden) were the “down to earth stories” about “what he had already described” in this book (xiv). Those stories, along with Christ’s Church (and it’s yet-to-be-fully-translated companion volume, Church Piety) were always focused on “the very heart of what the Church stands for” (xiv), that is, the atoning work of Christ and the forgiveness of sins for us.

“His purpose was always to guide the common church member and sincere seeker both to know what the Christian faith stands for and also to embrace that faith” (xix). You’ll see that in this book, as in almost all of his printed words. Even more than that, in this particular work, Giertz says he wants to talk to people who don’t necessarily darken the doors of the church. In Sweden that was a pressing problem. All were born, baptized, and confirmed in the Lutheran Church, but most fell away from the official state church into nothingness. He looks around and sees “90 percent of the parishioners in reality have excommunicated themselves by never attending a service and where those who do attend receive the sacrament very seldom” (90).

He divides the book into two parts. First, he defines the church, and then he describes the work of the church, that is, handling the means of grace.

He begins by having us look at a church on the Swedish countryside. “The old church, though firmly planted on the ground, is also closest to heaven” (3). With this image he begins to help us understand why we have churches. Here, and everywhere, Giertz pleads with us to participate in the life of the church, to receive the gifts God has to give, for we will find them here and nowhere else, because here the Lord brings his Word to us. Here, God brings heaven to us and brings us to heaven. “Just as we must enter into the life of art and music, and only in that way gradually appreciate the richness of them, in a similar way we must participate in the life of the church in order to receive its treasures” (5). It must be this way, as Giertz says later, because the church is there first, before us, and we are brought into it, baptized into it, received into it. We don’t make the church. The church, through God’s tools, makes us.

Again, much of what Giertz says reflects on his time and place. He lives and works in a church most of his fellow Swedes ignored or rejected. They all acted like they could be an “Israelite on one’s own” (15). Who needs the church? It’s not hard to apply this to today. When everyone is spiritual and not religious, when the nones leave the church farther and farther behind, when less than half of Americans hold church memberships…. Giertz’s Sweden is our America. Nobody knows what the church is, what it does, and why we need it.

The church is not a social club; it doesn’t exist for the pure fellowship of it. The church exists to deliver Christ’s atonement to you. It exists to destroy the stone foundation of your sinful nature (to borrow images from The Hammer of God) and plant you firmly on the stone foundation of Christ your Redeemer. The kingdom, the church, Giertz says, becomes a new thing at the cross of Christ (26), because Christ’s sacrifice is how “God found a way for his holiness to come to us unholy beings” (52). And “One becomes holy in Christ Jesus, never outside of him” (56).

Even though it doesn’t look it. The churches look old and run down. The tools we use look ineffective, “strange sacraments” (33-34). We have, as Stalin quipped, no divisions with which to back up any claims. But this is just as it must be. The church now is like Christ was then, in a state of humiliation. We are now what Christ was, filled with the Deity of our Lord, and yet appearing human, all too human. We look forward to a glorious future, when the church—that is, we—will be as Christ is—exalted, glorified!

And since we are a body of Christ, united, one, we stand in one long unbroken line as the Una Sancta: one, holy, Christian, and apostolic Church. Frequently Giertz returns to this thought and the comfort it gives in The Hammer of God, as pastors, each needing to learn a lesson, find that they can only pastor when they are built on the solid foundation of the Word, a Word passed down through the centuries, proclaimed over and over again by humble instruments, but always carrying that incredible power: “I forgive you all your sins in the name of Christ.”

“Just as Jesus once entered the world as God’s outstretched hand, as a visible revelation of God’s invisible being, and as an audible message of that which no ear has heard, so God’s hand is still stretched out at the baptismal font and the communion rail, and so the Word still sounds, not as a mechanical repetition of what the Master once said but as a continually repeated message from the mouth of our Savior. The Word is not only a teaching but a living call, an offer from God, a herald’s summons, that the Eternal One issues to us and that again and again requires from us a response. It is the same way with the sacraments. They are not symbols and metaphors but Christ’s way to deal with us today, just as real and tangible as He once dealt with people on the fields in Galilee and the streets in Capernaum. Thus He has given us baptism in order still to receive people into the Kingdom and into the fellowship of His followers. Thus He is still at the table with us in the Lord’s Supper to make us partakers of His atoning sacrifice. He has not left the world, where He once was born for our salvation.” (102-103)

God is really present. His Word is really his Word. Or else there’s nothing. This is the great either/or with which Giertz operates. “The Bible is God’s address to man” or it’s nothing (104). As are the sacraments, and we care for them equally. “God has given both of them to us because both are needed” (105-106). We need them, desperately. In them we discover that our God “welcomes sinners and eats with them” (Luke 15:2; cf. page 121). We discover a bridge across the abyss between us and God: “It is my baptism” (126).

He also spends some time on the office of the ministry, “one of the tools which God has designed to speak and act in the world” (161). He vigorously argues against women’s ordination, saying that we have no right to change around God’s office, while at the same time he will here, and elsewhere, speak of the great value of women in the church and the world. He was no misogynist.

One interesting image he brought forth about the ministry that we do well to chew on came from a German pastor who divided pastors into three kinds: the workhorse, the racehorse, and the merry-go-round horse. The workhorse does everything and is consumed, torn apart, and devoured by the work. The racehorse runs around inside the parish and out, doing everything, being everywhere, presenting at this and that meeting, but rarely standing before his people. The merry-go-round horse acts as the congregation’s amusement director and plans all kinds of great programs and activities. Rather, Giertz says, be a poor church shepherd (171). Guard, guide, feed, and nourish the sheep.

There is much that recommends this book to you.

It begins with a wonderful biographical essay, introducing us to his life and work.

It is biblical. When you read Giertz, it’s just nice to read biblical theology. There’s little that we will disagree with in this book, or in his other writings. (Though there is some, especially as you consider what he says about the oneness of the Church and his decision to remain in the Church of Sweden for forty years after they began ordaining women and all that came along after. As you read other works of Giertz, you’ll encounter a gentleness that allows small elements of historical criticism to linger now and again.)

It is pastoral. Living and working in a mostly godless land, Giertz wants to communicate to all readers, not just professional theologians, and he especially wants to appeal to and cling to the Baptisms that all Swedes received, as he did. He counsels against simply cleansing the rolls. Let their Baptisms stand, he says. Go after the people, don’t crush them. We do well to model our pastoral care after such a thing, to recall the great power of Baptism, and how a call to that Baptism can be so very powerful.

This is Giertz’s heart. He wants to be a pastor, a true pastor, who handles the Word and Sacraments, who brings them to souls, weak and strong, so that those souls can receive Christ and his atoning love. For Giertz, that’s another either/or. It’s not liturgical versus contemporary or liturgy versus awakening (a key word in the Swedish context, as you’ll learn). It’s either atonement and forgiveness in Christ or it’s culture, progress, and the human mind (87).

It’s grim, no doubt about it. It was grim in the 1930s when Giertz wrote, in the 1950s when Sweden began ordaining women, and in the 1990s when Giertz died. It remains grim today. And yet, there is hope: “God is in our midst! All Christian life is characterized by this overwhelming truth, the whole existence of the church is carried by this jubilant certainty: God is present here!” (101) This is how we approach the church and the Word she preaches. In one of his most quotable lines from this book, Giertz says, “We should always read the Bible with the intention to learn about salvation” (109). This is so, because God has put into our hands a means by which he lays his hands upon us (135). He baptizes us. He feeds us forgiveness. He preaches his words. And in that most neglected of sacraments, in private a Christian can lay their hand upon you and declare that God forgives you.

I cannot recommend this book highly enough, along with most anything Bo Giertz has written (and which is in English). He deserves to be discovered among us. Many thanks to Hans and Eric Andrae and Bror Erickson for their work in translating more and more of Giertz into English.

PreviousCall Day and Graduation 2022
Next A Huge Celebration Success in San Antonio in 2022!