The Joy of Eternal Life

The Joy of Eternal Life 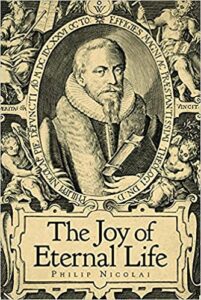 Philipp Nicolai is best remembered as the author and composer of two hymns: “Wake, Awake, for Night Is Flying” (CW 486) and “How Lovely Shines the Morning Star” (CW 370). Lutherans have long hailed these hymns, respectively, as “The King and Queen of Chorales.” The hymns have also enjoyed wide reception among Christians of other confessions, as demonstrated by their inclusion in many different hymnals. While these two beloved hymns are quite well known, the story of their origin is not as well known.

Philipp Nicolai, a Lutheran pastor who had served in several congregations already, came to the parish of Unna in Westphalia in 1596. The following year, the plague struck Unna with dreadful ferocity; in 1597 alone, more than 1,400 residents died. Nicolai relates that the small town often witnessed up to 30 funerals in a single day.

Surrounded by terror and engulfed in grief, Nicolai found consolation in the doctrine of eternal life. He writes, “During this time, nothing was sweeter, fonder, or more pleasant to me than contemplating the precious lofty article of eternal life procured by Christ’s blood,” (xiii). From his contemplation on Scripture and numerous devotional writings, Nicolai produced a book for his fellow mourners, titled Freudenspiegel des ewigen Lebens. In this book he included three hymns that he had written, two of them being “Wake, Awake, for Night is Flying,” and “How Lovely Shines the Morning Star.”

At long last, Nicolai’s book has been translated in its entirety under the English title The Joy of Eternal Life. The translation was completed in 2021 by Matthew Carver, who also translated Walther’s Hymnal. While the background to The Joy of Eternal Life is already a story of divine consolation gleaned in a time of pestilence, the translation effort shares a similar story. In his preface, Matthew Carver relates,

How fitting, then, that the hymn ‘O Morning Star, How Fair and Bright,’ resounding in a church one Sunday during Epiphanytide in the year 2020, should have so moved our dear departed brother in the faith Rev. Paul T. McCain [former CPH executive editor] with greatest urgency to initiate the present translation! Who (but the Lord God) knew that the same year would see the translator surrounded by tidings of contagion as he committed to English Nicolai’s words of comfort . . . or that the Lord would call Rev. McCain home on November 25 of that year? (ix)

Because of the impetus of Reverend Paul McCain and because of the translation work of Matthew Carver, readers of English now have access to the fruits of Philipp Nicolai’s meditation upon eternal life.

“I believe in . . . the life everlasting.” Every time we confess the Apostles’ Creed, we proclaim our belief in the eternal life purchased for us by Christ and promised to us in the Holy Scriptures. Concerning this closing article in the Creed, Nicolai writes,

It is with this precious article that we must comfort, strengthen, and revive ourselves in every necessity that befalls us and, in the tribulations of body and soul, cling to the certain assurance and infallible hope that our heavenly Father will, after a little while, summon and take us (who believe in the name of the only-begotten Son of God) from this wretched valley of sorrow to Himself in heaven. (xv)

In this book, then, Philipp Nicolai seeks to instruct and console his readers, and, by doing so, cultivate in them exactly what the title states: the joy of eternal life.

The first section of the book concludes with consideration of four uses of the article of eternal life: (1) It gives incitement to love. (2) It gives comfort in cross and tribulations. (3) It teaches us to die to the world and turn our hearts to heaven. (4) It teaches us to long and sigh for our heavenly fatherland.

In the second section of the book, Nicolai expounds how God readies His people for eternal life. Nicolai concludes that all of God’s benefits (or gracious works) toward His elect are directed by God unto the blessed goal that we would live with Him forever. Systematically, Nicolai explores six of God’s benefits and shares how each one leads to our eternal life. These six benefits of God include: (1) The making of man. (2) The redemption of man. (3) Our rebirth. (4) The dying Christian’s journey from this world to heaven. (5) The condition of elect souls with God in paradise. (6) The resurrection of our bodies on the last day.

The third section of the book consists of hymns. “How Lovely Shines the Morning Star” and “Wake, Awake, for Night is Flying” appear in the translations used by The Lutheran Hymnal of 1941. Those familiar with the five stanzas of “How Lovely Shines the Morning Star” that appear in Christian Worship will find two more stanzas to the hymn. A third hymn by Philipp Nicolai is included, “Farewell to the World,” based upon Psalm 42. Finally, one hymn is included by Jeremias Nicolai, titled, “Hymn on Eternal Life.” Matthew Carver translated the last two hymns into English. He also produced and included in brackets a literal, prose translation of each stanza for all four hymns.

With this book Philipp Nicolai accomplishes what he intends: he delivers to his readers the precious joy of eternal life. The book has a systematic layout and a devotional style. The writing is drenched throughout with the language and imagery of the Scriptures in a way similar to Johann Gerhard’s Sacred Meditations. Under the subheadings, the translator has provided references for the biblical quotations and allusions. The sheer number of passages listed demonstrates Nicolai’s remarkable familiarity with the Scriptures.

The modern reader may find that the descriptions in the book are mystical at times. From what I can tell, Nicolai speaks in accord with the imagery of the Scriptures, and I don’t believe he is out of step with other Lutheran devotional writers. He does at times engage in some speculation (such as that believers eat no food in heaven other than the love of God; or that without the fall into sin, people would have ascended into heaven alive).

One aspect that I found challenging was that Nicolai often includes long quotations from other works. At times, these quotations go on for a number of pages. Many of them he takes from works that he attributes to Augustine. He also includes long quotations from Luther’s sermons. As I read, I sometimes found myself wanting Nicolai to teach the point at hand rather than referring to someone else. Given the circumstances, though, his structure is understandable. Nicolai was surrounded by mourning and suffering people. He desired to comfort them, and so he shared with them the very passages and writings that had given him comfort.

I found the teaching of the book to be helpful and thought-provoking. One theme that surfaces again and again is the perfect love that is received and given in eternal life. Additionally, I appreciate that Nicolai uses a good amount of ink extolling both the paradise of the soul with God after death as well as the glorious resurrection awaiting the body on a day that is to come.

To any lover of Lutheran hymnody, I would certainly recommend this book. Like me, others will appreciate Philipp Nicolai’s hymns all the more when they know the background to them.

To all brothers in the ministry, I would recommend this book. As we teach the article of eternal life, as we console those who are mourning, and as we prepare souls who will soon be leaving this world, there is much that we can glean from Nicolai’s presentation.

I would also recommend this book for lay people who have some familiarity with doctrinal and devotional literature.

At some point, I intend to read through this book again for further edification and to enhance my own teaching and preaching.