The Drama of Ephesians: Participating in the Triumph of God

The Drama of Ephesians 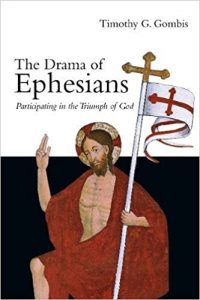 Timothy Gombis is associate professor of New Testament at Grand Rapids Theological Seminary in Grand Rapids, Michigan. His PhD dissertation was on divine warfare in Ephesians.

Can you remember the last time you read Paul’s letter to the Ephesians as a drama? This is how Timothy Gombis invites us to receive and practice the truth in this inspired epistle. In The Drama of Ephesians, he presents his argument by demonstrating how Paul structured this letter according to the pattern of divine warfare that was common in the ancient world (28). He also argues that when Paul speaks about the truth as in Ephesians 4:15, he is indicating what the church is to do not just what it is to know and speak (16). Gombis writes, “This book reads Ephesians asking, ‘How does God intend for the gospel dynamics in Ephesians to overtake our lives and our world and to redeem them for his glory and the good of his beautiful but broken world?’” (10).

Gombis assumes that his reader is going to be uncomfortable with his assertion that Ephesians is a narrative drama meant to be enacted. Rather than approach the letter as a doctrinal treatise, he encourages us to treat Ephesians as apocalyptic in the sense that it gives us a vision of reality that we do not otherwise see. Because our default is to perceive all events from an earthly perspective he maintains, “Ephesians functions to jerk us out of this conviction and to expand the horizons of our imaginations so that we envision reality from the perspective that Jesus Christ rules this world and longs for us to enjoy his redemptive reign” (23).

The author is effective in presenting a case for his argument from Ephesians itself. In chapter two, he identifies some supra-human characters we meet in Ephesians and their influence behind patterns of idolatry, oppression and injustice in the present age (45). In chapter three, he shows how the apostle reorients our imaginations by shaping our identity in Christ. This will empower a faithful “performance” (as Gombis calls it) of the gospel drama (69). Chapter four points us to the cosmic victory of Christ celebrated by a temple gathering of people whom God has raised from death to life. It is a unique victory over the powers in that this “temple” is a gathering of people from cultures and traditions that were once hostile toward one another but now united through the cross (104).

In expounding God’s triumph in Christ as presented in Ephesians, Gombis is careful to avoid triumphalism. Chapter five deals with God’s work through weak and lowly messengers in order to display his strength and wisdom (110). Chapter six demonstrates how God also triumphs over evil by giving his church the gift of unity and blessing her with leaders who will direct members of this community to understand their roles and perform them faithfully (141). This happens as leaders analyze cultural patterns and reorient the imaginations of God’s redeemed people so that they are gospel-focused.

This is important because Paul casts the church as the presence of Christ on earth to engage in conflict against the powers of this present evil age. The purpose of chapter seven is to convey that though God has delivered the powers a deathblow in the resurrection of Jesus, they still are “arrayed against God’s purposes in the world” (157). The church faithfully performs the role of the divine warrior when, by the power of the Spirit, she names and resists the corrupt influences aimed at keeping humanity divided. The church is also faithful as she confesses her sins and weaknesses, giving testimony to the resurrection power of grace (169). “Such communities,” writes Gombis, “are bearers of hope because they embody God’s restoration of the world, anticipating the day when God makes all things new” (179).

Drama of Ephesians is well written and the author’s line of thought tracks throughout. He develops his argument with insight and gives his reader a fresh perspective of Ephesians. Gombis also demonstrates a rich familiarity with Scripture and an ability to trace the salvation narrative throughout the history of God’s people.

There are times, however, when the reader might crave a little more clarity. For example, the author uses the phrase “participating in God’s drama of redemption” quite often. Though in some places he makes a distinction between Christ’s atoning death and resurrection and the church’s call to embody this pattern, there are other places where they also seem synonymous. That kind of ambiguity could lead to misunderstanding and misapplication. It is important to read this book in context since Gombis writes things that may initially sound ambiguous and actually are when taken alone.

Most times when the author was presenting ideas that were abstract, he added helpful scenarios to make them concrete. For example, in the chapter dealing with pastors and their role to direct communal conversation, he pointed out the importance of faithful language. He referenced the phrase, “It was a God thing” to show how fad language or Christian clichés like this actually undermine faithful gospel proclamation. He made a compelling case for how this kind of language does not line up with the gospel narrative and can lead to all sorts of misunderstandings (149).

He brings in many similar concrete examples from culture, the author’s experience in the local church, and even from his own personal life. These often read more like confessions of doing it wrong rather than getting it right. In doing so, Gombis portrays the kind of humility that only the gospel creates. He also does a fine job of confronting triumphalism in the visible church and naming specific ways in which it has failed to be faithful in its performance of the gospel drama as it adapts to corrupt patterns and models of success in culture. These are an implied call to repentance.

Pastors will benefit from reading this book. It will help them read Ephesians through new lenses. The author is pastoral in his approach and is very interested in relieving leaders in the church of the pressure they face to grow churches and increase their social impact (153). God’s gifts to his church are pastors whom he immerses in the gospel drama. He contends that “[these leaders] must help their churches develop the skill of imagining the world according to the gospel drama and envisioning one another in renewed ways according to the scriptural narrative” (148). Another emphasis that stands out is unity in the body of Christ. Gombis advocates that reconciliation between conflicted individuals will be one of the main goals of the church (143).

The Drama of Ephesians does a wonderful job of drawing the reader into the victory of God through Christ. It was hard to locate anything specifically that would be misleading.  In doing some research on the author, it appears that the New Perspective on Paul has influenced him to some degree, but those types of themes were not readily apparent in this book.  It would be difficult to accuse this author of promoting a social gospel. While he doesn’t always give a clear admonition to preach repentance unto the forgiveness of sins, he does push against the church merely having a social impact in the greater context of the book. Perhaps the general reminder to be on the lookout for any sort of false dichotomies applies here.

There are some things that he does not say which may be disappointing for those with a high view of the Sacraments. For example, Ephesians chapter five has a specific reference to Holy Baptism which he does not address. Though it is refreshing to hear the author encourage more frequent celebration of the Lord’s Supper, he doesn’t elaborate much on its value as the meal through which Christ comes to us (146).

The book’s strengths, however, are many. It is evangelical in its tone and proclaims salvation by grace alone. It portrays an urgency for the church to be faithful and discerning in its performance of the truth. It leads the reader to anticipate the imminent rule of Christ and the life of the world to come. Concrete examples of performing the gospel drama (or failures thereof) from history and contemporary culture fill the book, making it a great blend between hermeneutics and pastoral theology.

Finally, it is faithful to the theology of the cross. God displays his victory through weakness and triumphs through defeat. Until Jesus appears in glory, God patterns the church after the cruciform triumph of Christ. Therefore, God receives all the credit. As Gombis himself closes, “May God indeed be glorified in the church and in the Lord Jesus Christ!”

PreviousPreach the Word – March/April 2020
Next His Mission: Jesus in the Gospel of Luke