His Mission: Jesus in the Gospel of Luke

His Mission: Jesus in the Gospel of Luke 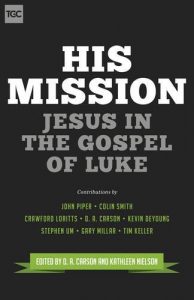 His Mission is a compilation of expositions by eight different authors and a written account of a panel discussion that took place with four of those same contributors.  These works were compiled under the direction of “The Gospel Coalition,” which is a fellowship of evangelical Reformed churches that strive to emphasize “grace alone through faith alone in Christ alone.”[1] The eight authors are all well-known and respected names within the Christian community for their writings and their education.  Without listing all of their credentials, it is fair to say that they have earned academic degrees that give authority to their writing.  Many have also served in prominent positions in educational roles, public platforms, such as the popular website “Desiring God” or the radio program “Unlocking the Bible,” and large organizations like Campus Crusade for Christ.  The format of the book is that each author presents an exposition on a particular section of the Gospel according to Luke to attempt to identify unique elements and insights into Jesus’ life and ministry.

John Piper begins by looking at the first two chapters of Luke.  One of the tactics I appreciated was how he emphasized Luke’s vocabulary choices and their number of occurrences.  For example, he mentions the purpose that Luke lists for writing this gospel is “that you may have certainty.” He contrasts this certainty with many Christians today who “do not know those things this way.  They know them the way one knows a cloud, not the way one knows a mountain” (10).  Luke uses the word Lord 28 times in these two chapters, all in reference to God, and notably emphasizes the divinity of Christ in this usage in Luke 1:45 as Elizabeth “used the word Lord for the God who spoke through Gabriel and for the child in Mary’s womb.”  These kinds of observations are found throughout this section as Piper gives the reader a chance to pause and ponder these chapters.  One final insight worth mentioning was his insight into the differing reactions of Zechariah and Mary at the words of the angel.  While they both asked questions, Zechariah asked how a message of God could be known, and Mary asked how it would be.  In this, he encourages that simple faith worked by the Spirit (19).

Colin Smith focused on Jesus’ preaching in Nazareth recorded in Luke 4.  He made some good points about how our preaching should match the Christocentric preaching recorded in that section and how Jesus spoke and personified grace “without restrictions” (36).  But he also made some points that I felt went beyond what this section of Luke teaches.  He implied that many, if not most Christian churches, have monotone preaching that “can seem like a lecture about prophecies from the past or promises for the future, leaving ordinary people in the pew asking, ‘What in the world does this have to do with me today?’” (26). Also, in connection with Isaiah’s prophecy about the “year of the Lord’s favor,” he spent a large amount of time writing about the Old Testament command of the Year of Jubilee in a way that seemed tangential to the topic.

D.A. Carson’s section on Luke 9 and “Jesus’ Resolve to Head toward Jerusalem” (47) proved to be one of the more perceptive portions of this book.  A refrain throughout his section has shaped my perspective on this chapter in how all of it is in the context of Jesus’ singular, resolute goal of the cross.  From Peter’s confession to the Mount of Transfiguration, from Samaritan opposition to others who want to follow Jesus, he paints these accounts with this one theme in mind. His focus on Christ’s singular goal in this chapter also influences the larger context of the Gospel of Luke and the Gospels as a whole.  “Away with all attempts to drive a wedge between Jesus’s teaching on the one hand and his death and resurrection on the other…Without exception, such books distort the teaching of Jesus, for when you read the Gospels carefully, you discover that Jesus teaches with the cross in view” (66).  He also points out several times that we as readers of Luke’s Gospel are in a different position than what the disciples were in.  “In his own time, Jesus is the misunderstood Messiah, but Luke’s readers see what Jesus’ contemporaries did not see” (54).

An area of weakness in Stephen Um’s exposition of the parable of the shrewd manager was that he went beyond the main point of comparison a few times.  Referencing the fact that the manager “said to himself, ‘What shall I do now’” (Luke 16:3), he makes this application: “Rather than admitting his wrongdoing and then repenting, the dishonest manager hunkers down in his self-sufficient obstinacy…The manager doubles down on his scheme and refuses to admit his need for mercy” (87-88).  He also seizes the opportunity to talk about the temptations that are attached to wealth and the use of money in connection with financial stewardship.  While most of these points are in line with Scripture (although one could take issue with his statement that “we need to be generous stewards in order to demonstrate our freedom from the grip of money consistently” (99)), the main point of comparison in the parable is only briefly addressed and seems at times to merely be an avenue for discussing other points of application.

The final section was a transcription of a panel discussion entitled “Did Jesus Preach the Gospel?” The impetus of the panel came from some preachers pitting the epistles of Paul against the Synoptic Gospels, while also addressing different emphases like the “kingdom of God” compared to “the gospel” or “eternal life.”  This was one of my favorite parts of the book.  It was refreshing to hear them balk at the idea of making one part of Scripture oppose another and for them to encourage “that when you’re interpreting the Scripture, the clear parts should inform the murkier parts” (141).

The strength of this book is the way it allows you to take the time to ponder the context of each section of Luke and to gain some insights into why Luke grouped certain accounts or fit them into a specific theme.  You can also find some good illustrations, and at times, I was impressed by how perceptive some of the writers were in their awareness of how humans often think and act.  Depending on what a pastor is looking for, it may not be as deep of a dive into Luke as you might expect.  It’s not a commentary on Luke, but I would recommend reading it in connection with your devotional reading or if you’re looking for an illustration or insight for a sermon.  I could also see it being a book that members enjoy taking off the shelf of your church library as lay-people are within the target audience of this book.

PreviousThe Drama of Ephesians: Participating in the Triumph of God
Next “Do Not Be Afraid!” The Urgent Message of Easter Messengers