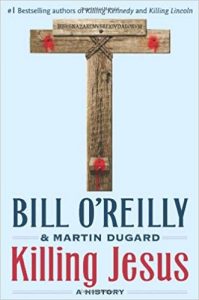 Bill O’Reilly and Martin Dugard are the New York Times best-selling authors of Killing Lincoln, Killing Kennedy, Killing Patton, Killing Reagan, and Killing the Rising Sun. O’Reilly holds a bachelor’s degree in history from Marist College, a master’s degree in broadcast journalism from Boston University, and a master’s in public administration from Harvard. He was the anchor of The O’Reilly Factor, once the highest rated cable news show in the country. Dugard is an author and adventurer who has written articles in Sports Illustrated and Runner’s World, as well as other historical books such as The Murder of King Tut and The Last Voyage of Columbus. He specializes in chronicling the drive of great men to realize their potential.

Killing Jesus attempts to be an “accurate account not only of how Jesus died, but also of how he lived, and how his message affected the world” (273). Although both O’Reilly and Dugard are Catholic, they admit that their goal in writing this book is not spiritual: “We are…historical investigators and are interested primarily in telling the truth about important people, not
converting anyone to spiritual cause” (3).

The book is written as a narrative history which divides Jesus’ life into three parts. Part 1 describes Jesus’ life before his public ministry, focusing especially on the slaughter of the innocents and his trip to the temple at age 12. Part 2 begins with the baptism of Jesus and then follows his ministry. Little time is spent on Jesus’ teaching and miracles, however; the focus is
on his interactions with Jewish leaders that led to his death. Part 3 describes the events of Holy Week, especially his suffering and death. This final section ends with the discovery of the empty tomb and a brief description of Jesus’ impact, both on the lives of his disciples and on the world.

Throughout the narrative, the authors frequently depart from Jesus’ story with vignettes that help the reader understand his world. Part 1 gives background information on Herod the Great, tells of the rise of Augustus in Rome, and includes a description of daily life in Galilee in Jesus’ day.
Parts 2 and 3 explore the politics at play between Tiberius, Pilate, Herod, and the Jewish leaders.

The authors undertake a noble task: Using both biblical and historical evidence to tell the story of Jesus more “fully” than ever before (4). Their attempt to do so, however, failed to meet their stated goal of “telling the truth” (3).

In fact, many details related in their “accurate account” are guesswork, corroborated by neither biblical nor historical evidence. For example, they state that Jesus’ family witnessed a massacre during Passover in Jerusalem in 4 B.C. (66); that the boy Jesus didn’t demonstrate Bible insight until age 12 in the temple (76); and that Joseph worked as a carpenter in Sepphoris (86). They also state as fact their speculation about Jesus’ childhood (81) and stature (103), about Judas’ motive for betraying Jesus (209), and about the personalities of Jesus’ disciples (219).

The authors admit in the introduction that there are “major gaps in the life of Jesus,” and that at times they had to “deduce what happened to him based on the best available evidence” (3). But they also promise to tell the reader when they do that, and they failed to do so consistently. One likely reason for advancing speculation as fact was their desire to write in a compelling, narrative style.

Even worse, some of their writing directly contradicts Scripture. For instance, they claim that Jesus was 33 when he began his ministry and 36 when he died (7). They also claim that Jesus chose fishermen as his disciples because they could speak many languages (139); that Mary Magdalene, not Mary the sister of Lazarus, anointed Jesus in Bethany (144); and that the
disciples didn’t comprehend that Jesus is the Son of God (187), while Peter’s confession in Matthew 16 makes clear that they did. They get many of the details of Jesus’ baptism wrong (103). They say his temptation was to “make his mind and body pure before preaching” (105), that he didn’t know when he would die (188), and that panic overtook him before he did (212).

Yet one should not be surprised at this. In their introduction, the authors write that the gospels “sometimes appear contradictory and were written from a spiritual point of view rather than as a historical chronicling of Jesus’ life” (1). With such a low view of Scripture, it is no wonder that
they treat the biblical evidence quite loosely.

At other times, their misinterpretation of Scripture displays their Catholic faith. They write that Peter was the first disciple (137); that Mary Magdalene was formerly a prostitute (144); and that his disciples, not his brothers, told him to go up to the Feast of Tabernacles and make himself known (171). All of these teachings are Catholic, but not scriptural. They also claim that the
woman clothed with the sun in Revelation 12 is the Virgin Mary (265) – a traditional Catholic interpretation.

The book is not devoid of any value, though. The authors do, on occasion, show some insight into the biblical record. When Jesus visits the temple at age 12, for example, they note that it is the first of eight times in Luke’s gospel that he says “it is necessary” about his work (76).

Perhaps of greater value are the descriptions of the political and social setting in which Jesus lived. The authors describe the Jewish messianic hopes of the time, Herod’s cruelty, Tiberius’ immoral lifestyle and fondness for the Jewish people, and Pilate’s relationship with the chief priests and predicament in placating the emperor while policing the Jewish people. All of these details paint a rich historical backdrop for the life of Jesus and aid in understanding the events that led up to his crucifixion.

Yet their twisting of the Bible casts doubt on the veracity of their extra-biblical information, as well. So do a few blatant errors: They state that the Philistines, not the Assyrians, conquered the Northern Kingdom in 722 B.C. (14). They also seem to be quite confused about their calendar: In describing Holy Week, they date both Monday and Tuesday April 3, both Wednesday and Thursday April 4, and to Friday they assign the date of April 7.

One last criticism: The authors set out to tell the truth about Jesus. However, they also say that “this is not a religious book” meant to convince anyone that Jesus is the Messiah (3), so they never address him as such. They deliberately leave out Jesus’ miracles, relegating them only to rumors in their narrative. Worst of all, they devoid Jesus’ life and death of any salvific purpose. How can they tell the truth about Jesus when the most essential facts about him are omitted? They succeeded in writing a non-religious book, but in the process ended up with an unhistorical one, too.

If read with discernment and caution, a pastor could make use of this book to get a better idea of the culture and politics – both secular and spiritual – of Jesus’ day. It provides interesting historical information to supplement what the Bible tells us about the Herods, Pilate, Annas, Caiaphas, and others. One might also read their description of Jesus’ torture and crucifixion in preparation for Good Friday. Although some of it is speculation, they describe the usual Roman practice for this form of execution, including some details of which this reviewer was unaware.

In summary, Killing Jesus is an easy and entertaining read that is hard to put down. But the authors meant it to be more than entertainment; they meant it to be an accurate history of the life, death, and impact of Jesus. In this they failed. At times, they got the facts wrong. At others, they speculated and called it fact. And they frequently contradicted the only truly accurate history of Jesus: the Bible. In spite of its weaknesses, the book does provide a better understanding of the time and place in which our Savior carried out his work and of the people he interacted with. This and its readability are the book’s redeeming qualities.

PreviousTriple Comfort for You and Those You Serve!
Next Story of Kua