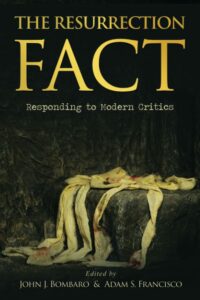 Each contributor within The Resurrection Fact responds to modern critics of the historical death and resurrection of Jesus Christ. This is the event on which justification became a reality. “He was handed over to death because of our trespasses and was raised to life because of our justification.” (Romans 4:25). The death and resurrection of Jesus are historical facts that have eternal impact on all those who believe. The purpose of the book is to defend these facts in order to share the gospel. “This assertion must be defended because it is a public proclamation, a public theology, concerning a public figure in public places regarding public events. The nature of Christianity is that it consists of a public truth claim: God was in the world reconciling the world to himself through Jesus Christ” (8). When objections are made, Christians have the responsibility to respond and can respond with confidence.

Mark Pierson defends the fundamental facts of Good Friday and Easter Sunday. “Did Jesus experience a physical resurrection from the grave—an authentic supernatural occurrence in which the God of Israel restored his servant Jesus to life—or not? If so, this solitary fact verifies the most basic claim of Christianity” (17). This first essay lays the foundation for the rest of the book by explaining the historical integrity of Holy Week.

Adam Francisco “explores the reasons a historian might make such a claim [that the resurrection is unbelievable] by exposing the philosophical assumptions behind what is often called the ‘historical problem of miracles’” (43). For example, Ehrman throws out the evidence for the empty tomb because his presuppositions are based on David Hume’s premise that since miracles can’t be proven they are not historical events. Francisco, however, concludes that history is history regardless of preconceived notions, and therefore the Gospel is true.

Craig Parton takes his essay down an enlightening path. He writes in the style of a modern debate between the first-century figures Gamaliel, Joseph of Arimathea, Nicodemus, and Paul. As Gamaliel raises objections to the supposed resurrection from the dead, Joseph, Nicodemus, and Paul all respond. His creative approach was a fresh take in the middle of the more academic works of the book.

Angus Menuge takes on the notion that evidence has nothing to do with Christianity. He states that “even apart from the evidence, Christianity has a claim to be taken seriously, because it is the only religion that…offers a credible solution to the human predicament…. Yet…unlike most religions, which focus exclusively on rituals and rules for living, Christianity concerns God’s actions in history and invites investigation of the data” (124). Thus he investigates the evidence for fulfilled prophecy about Jesus, the eyewitness testimony, and objections that those are not enough to satisfy a claim for truth. “The historical fact of the resurrection rises unscathed…showing that Christians are justified in believing that God raised Jesus from the dead” (146).

Jonathan Mumme responds to Dale Allison’s “investigation of modern research on apparitions of the recently deceased” which he uses to propose the accounts of Jesus appearances after he was crucified bear resemblance to other post-death appearances. Allison concludes that they are figments of the grieving disciples’ imagination and desire for Jesus to be alive. Yet Mumme retorts that a “transformed body, not an apparitional form, is precisely what the New Testament authors claimed to have witnessed” (149). He pointedly presents that while the physical resurrection of Jesus defies all human experience, it provides the real solution to our greatest need to be re-created in perfection postmortem.

C.J. Armstrong and Andrew Deloach take aim at the criticism that Christianity falls in line with all other ancient myths by restoring the word ‘myth’ to its original intent. “The myth-hater claims that because myth is not rational, it must be imaginary, and it is therefore unscientific and necessarily false. But this is precisely the problem, as [C.S.] Lewis well understood: if one begins by knowing on some other ground that Christianity is false, then the parallels to pagan myths will only confirm this falsity; but when the veracity of the Christian claim is the very issue under investigation, the argument from correlation clearly begs the question” (185). They argue that the parallels between the ancient myths and Christianity point to the greater fact that all myths point back to the reality of Jesus. “The resurrection is the eucatastrophe, the overwhelmingly joyous happy ending of the Christian myth-become-fact, in which everything sad has come untrue” (205).

Carolyn Hansen asserts that “Christ’s bodily resurrection is absolutely essential to the Christian faith; it’s the sine qua non of Christianity. No resurrection, no biblical Christianity. Period” (207).  Hansen responds to Gerd Lüdemann’s claim to be a Christian yet deny the physical resurrection of Jesus. Lüdemann asserts that Paul’s road-to-Damascus encounter was a “hyperrealistic, emotionally charged vision” (215). Hansen not only tears down Lüdemann’s propositions but also builds up the argument “that the apostle was making no mistake about the resurrection yielding a corporeal manifestation of the once certifiably dead Jesus” (228).

Francisco concludes the defense of the defense of Easter testifying, “Jesus’ resurrection is Christianity’s linchpin…. Illustrating it to be a fact does not and cannot bring non-Christians to saving faith in Jesus. Only God the Holy Spirit does that. It can, however, change the minds of those who have fallen prey to bad history…and it most certainly can demonstrate that Christianity is not a cleverly devised myth” (232). Defend and preach the Gospel.

This reviewer that Jesus loves thought that this is a relevant study of Easter Apologetics. Each writer displayed a respect for the person attacking Jesus’ historical resurrection while demolishing their stronghold. Bombaro and Francisco have a high view of the work of the Holy Spirit but also do not see that as a way to check reason and critical thinking at the door. The store of essays displays that God knew exactly what he was doing in sending Jesus Christ to die and rise again. Christians are not fumbling in the dark in circles of higher education. These are well-thought-out and reasonable defenses of the Christian faith at the core of the Gospel.

Most of the book was easy to follow. At some points, the reader may need to slow down in order to fully comprehend the arguments being made. The author of this review would like to re-read several chapters to further digest the arguments laid out.

This book will help a pastor in preaching for Easter to a crowd of people growing skeptical of miracles. Since Easter is when many fringe members attend with their families who may not even believe, this is a great opportunity to defend Jesus being raised again while keeping the proclamation of the Gospel front and center. This book will also help a pastor respond to neighbors and prospects who have questions and doubts about the validity of the Bible’s claims. This book serves as a resource to help a pastor build up the members who are losing kids and grandkids to the college university’s “higher learning.” There are reasonable answers to the many objections made against Christianity.

This reviewer believes that an apologetic method of answering skeptics while keeping the death and resurrection of Jesus front and center can be directly in line with preaching the gospel while answering these questions. All pastors would benefit from reading this book.