I Don’t Have Enough Faith to Be an Atheist

I Don't Have Enough Faith to Be an Atheist 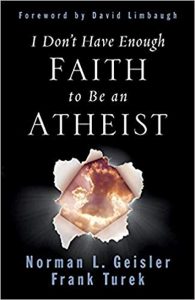 Norman L. Geisler, a co-founder and former president of Southern Evangelical Seminary, has authored or coauthored over 60 books on systematics, ethics, and apologetics. A teacher at the university and graduate level for over forty years, he has spoken or debated on apologetics in all fifty states and in twenty-five countries. Frank Turek holds a DMin from Southern Evangelical Seminary. He has authored several books on apologetics and hosts a television program entitled “I Don’t Have Enough Faith to Be an Atheist.” Turek speaks regularly on apologetics at churches, high schools, and college campuses.

I Don’t Have Enough Faith to Be an Atheist follows a twelve-step outline to prove that Christianity is the most reasonable belief system. Starting at the point of complete skepticism, their outline begins with two ideas. First, truth about reality is knowable. Second, the opposite of true is false. These two statements are meant to engage people who have thoughts such as, “All truths are relative.” Geisler and Turek encourage the use of the Road Runner tactic (39ff), which helps expose such statements as self-defeating. For example, take the statement, “There is no such thing as truth.” Is that statement true? If so, then there is such a thing as truth. They also use the Law of Noncontradiction (56ff) to show that because truth exists, the opposite of true must be false.

Point number 3 of Geisler and Turek’s twelve-step process states, “It is true that the theistic God exists. This is evidenced by the beginning of the universe, design of the universe, design of life, and the moral law” (71). The four chapters covering this point are heavy on science, but provide fascinating insights into speaking with evolutionists and non-Christians. For example, Geisler and Turek show how the Big Bang Theory is stronger evidence for creationism than evolution. They say, “Everything that had a beginning had a cause. The universe had a beginning. Therefore the universe has a cause” (75). While evolutionists claim that this first cause was random chance or a spontaneous “something out of nothing” moment, the far more reasonable conclusion is that the first cause was a powerful being who created the universe (aka God).

Points 4 and 5 of Geisler and Turek’s twelve-step outline continue, “If God exists, then miracles are possible. Miracles can be used to confirm a message from God” (195). The logic of these two points is summed up on page 209: “If there is a God who can act, there can be acts of God (miracles).” Geisler and Turek contend that God uses miracles to confirm the revelation of his Word (209).

Point 6 states, “The New Testament is historically reliable. This is evidenced by early testimony, eyewitness testimony, uninvented (authentic) testimony, and eyewitnesses who were not deceived” (219). The four chapters covering these points will be a more familiar topic for pastors, as they dovetail with the same textual criticism principles learned during college and seminary classes. This section culminates with a massive amount of evidence that proves beyond a reasonable doubt that Jesus rose from the dead (299-319).

Points 7 through 12 pick up the pace as they follow a simple logical progression. “The New Testament says Jesus claimed to be God. Jesus’ claim to be God was miraculously confirmed by his fulfillment of many prophecies about himself, his sinless life and miraculous deeds, and his prediction and accomplishment of his resurrection. Therefore, Jesus is God. Whatever Jesus (who is God) teaches is true. Jesus taught that the Bible is the Word of God. Therefore, it is true that the Bible is the Word of God (and anything opposed to it is false)” (325). Scientific observations and logical deductions from those observations formed the basis of the first six points, but these final six points lean more heavily on Scripture. Through the use of Scripture, logic, deduction, and extra-biblical evidence, Geisler and Turek arrive at their final destination: the Bible is the Word of God, and any reasonable person would believe that.

All told, I Don’t Have Enough Faith to Be an Atheist accomplishes its goal. It starts at the most skeptical of starting points and proves beyond a reasonable doubt that the Bible is God’s Word and should be believed. Geisler and Turek lay out their argument in a logical, thought-provoking, and easy-to-read manner.

I Don’t Have Enough Faith to Be an Atheist has several positives to it. It is extremely logical and easy to agree with. Some of the logical syllogisms take time to think through, but they always hold up to scrutiny. Geisler and Turek also emphasize having evidence for your beliefs. Using logic, science, history, basic deductive skills, and biblical evidence, the evidence in favor of the historicity and believability of the Bible is almost overwhelming. While a Lutheran knows that no one can be reasoned into believing, I Don’t Have Enough Faith to Be an Atheist does a splendid job of removing intellectual obstacles to the faith. The authors are thorough in their arguments. Geisler and Turek also spend a great deal of time answering common objections and detailed arguments against their twelve-step, logical outline.

There are a few negatives to this book. First, Geisler is a self-proclaimed “moderate Calvinist,” and the reader must be aware of his theological presuppositions. Turek includes plenty of decision theology throughout the book, even ending with an altar call of sorts (385). The other negative to I Don’t Have Enough Faith to Be an Atheist is the lack of direct scriptural support. The first half of the book is almost devoid of Scripture, which might cause discomfort for a Lutheran. However, Geisler and Turek purposefully leave out Scripture until they prove beyond a reasonable doubt that Scripture is historically reliable and thus believable. For the purpose of convincing a biblical skeptic, the initial lack of Scripture is not a negative. For the purpose of planting faith and moving beyond intellectual assent of Scripture, the lack of God’s Word is a negative.

There are practical uses for I Don’t Have Enough Faith to Be an Atheist. First, it can help open up a Bible skeptic to hearing Scripture. Geisler and Turek provide so much biblical and non-biblical evidence to support the believability of Scripture that any reasonable person would be open to hearing it. Perhaps its best use is that I Don’t Have Enough Faith to Be an Atheist can help reach almost anyone with whom a pastor comes into contact. Geisler and Turek write for avowed atheists, doubtful agnostics, well-versed unbelievers, and believers who struggle with nagging doubts or questions about the Bible. They want every person to examine why they believe what they believe. They say, “The unexamined faith is not worth believing” (29). While that statement might go too far for some, the basic premise is solid: Believers should be prepared to give a reason for the hope they have (1 Peter 3:15).

In a world that is increasingly godless and closed off to Scripture, I Don’t Have Enough Faith to Be an Atheist will help equip Christians of all kinds as they prepare to share their faith and bring light to a darkened world.

PreviousFour Branches May – 2019
Next Redeeming Philosophy