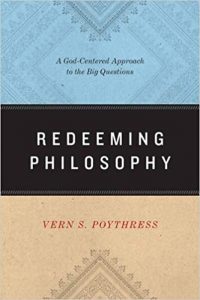 Vern S. Poythress (PhD, Harvard University; ThD Stellenbosch University) is professor of New Testament interpretation at Westminster Theological Seminary, where he has taught for over 35 years. He is the author of numerous books on biblical interpretation, language, and science, including In the Beginning Was the Word, Redeeming Science, Redeeming Sociology, Logic, and Chance and the Sovereignty of God.

“What does Athens have to do with Jerusalem?” The question is as old as Tertullian himself (c.150-240 A.D.), and perhaps even older (e.g. Paul in the Areopagus). What does philosophy have to do with the theology of the Bible? How should Christians view philosophy? In Redeeming Philosophy Vern Poythress seeks to answer these questions and set forth the groundwork for a distinctively Christian approach to philosophy.

Poythress begins by arguing that a Christian approach to philosophy is necessary, because even though secular philosophers and Christian philosophers ask many of the same questions, they address them in a fundamentally different way. Christians do their thinking in submission to God’s revelation in Scripture, while non-Christians do their thinking according to autonomous human reason. Poythress also claims that while secular philosophies fail to answer some of the most foundational questions (e.g. What is there? What is it? What is the meaning of existence? etc.) with any consistency and certainty, Christians can answer them with confidence because God made the world with order, and he has made humans in his image with the ability to understand the world. For this reason, the author believes “that the time is ripe for Christians to do significant rethinking of philosophy – a redemption of philosophy, if you will” (32).

To that end, Poythress explains a “Christian” approach to philosophy called “multiperspectivalism,” which was developed by his colleague, John Frame. Multiperspectivalism is a way of using “multiple perspectives” to respond to big questions. It is an approach that recognizes that humans are not God, and therefore their knowledge is limited to one perspective or another. Multiperspectivalism also seeks to account for the age-old philosophical problem of the one and the many. (For example, there is “one” category of horses and “many” individual horses. The category can’t be understood without pointing to individual horses, while an individual horse cannot be defined as such without the category.) When it comes to humans, human beings all share a common humanity, yet at the same time each individual is unique. “We have unity in diversity, and diversity in the unity of the one humanity” (57). According to Poythress,

Poythress grounds his approach in the Trinity, where he claims that multiple perspectives are “equally ultimate,” which means that the one and the many cohere as they do in the Triune God. While this might sound like nothing more than a Christianized version of postmodern relativism, Poythress argues that “[Multiperspectivalism] presupposes absolutism [the absoluteness of God’s viewpoint]. The presence of God implies that truth is accessible to human beings and that there is a difference between truth and falsehood” (63). In other words, there is absolute truth, and humans can know the truth. Multiperspectivalism is a way of acknowledging that there are often different perspectives on the truth.

In the remainder of the book Poythress explains how the multiperspectival approach can be applied in a wide range of areas, such as ethics, epistemology, linguistics, and logic. To help clarify, an example can be given be given in the area of ethics. John Frame gives three perspectives for examining ethical issues: the normative, the situational, and the existential. Consider the Seventh Commandment. The normative perspective is that God is the ultimate authority and stealing is wrong because God says so (norms it). But God has also created the situation we live in and rules over it. Therefore, we can also examine how stealing negatively impacts our neighbor, the one stealing, and society itself. The existential perspective points to the fact that a person’s internal conscience (created by God) tells them that stealing is wrong. All three perspectives are interrelated and harmonize with God’s plan. Poythress gives several other examples of how multiperspectivalism can be applied, including a painstakingly tedious (21 page!) description of the different ways of looking at an apple.

While I appreciated the author’s attempt to explain the connection between the one (unity) and the many (diversity) and his desire to base multiperspectivalism on the analogy of the Trinity, I had many questions about the basis of this paradigm. Earlier, I mentioned how Poythress claimed that Christians should do philosophy in submission to God’s revelation in Scripture. While the doctrine of the Trinity is revealed in Scripture, Scripture never claims that the Trinity serves as a model for how things really are (ontology). In other words, how do we know that creation itself is an imitation and reflection of the Trinity?

I found the most helpful part of the book to be Poythress’ deconstruction of secular philosophies. Pastors who are interested in philosophy or who have members enticed by secular philosophical positions will find these sections to be a good summary of the futility of philosophy and its claim to answer all questions.  Poythress clearly and succinctly unveils the foundational problems with materialism, existentialism, and empiricism. The author brilliantly shows that there are systemic flaws in every philosophical system and that none of them answer life’s biggest questions.

Pastors may also appreciate Poythress’ warning against the “reductionist” tendency of philosophical systems: “Historically, Western Philosophy has striven for complete transparency, complete mastery, and absence of mystery. Underneath the surface, it has desired godlike knowledge – virtually to be God. That is one echo of the fall of man, in that he desired to “be like God, knowing good and evil (Gen. 3:5)” (104). Reductionism is an attempt to get to the bottom of things and give explanations that are “ultimate” (a passionate pursuit of modernism). For example, materialism is reductionist in its attempt to dissect the world into ever smaller particles (e.g. atoms, molecules, quarks, etc.) in order to discover the key to reality. However, it fails to take all of existence into account (e.g. consciousness cannot be explained by matter and sometimes hyper-analyzation leads to more questions, such as those that arise from quantum mechanics).

While the book doesn’t mention it, there is a warning here for theologians, as well. Systems – even theological systems – tend to reduce and homogenize and can easily begin to influence the interpretation of Scripture. This is one of the reasons Luther was so critical of Scholastic Theology with its heavy reliance on Aristotle. In certain areas, it put God in a box constructed by logical human categories. We must be careful not to do the same.

This book is not an easy read. While multiperspectivalism may provide us with a richer way of viewing the world in certain areas, this reviewer has some strong reservations about its claimed Trinitarian basis. However, for those interested in philosophy, Poythress’ critique of philosophical systems might be worth the price of the book.

PreviousI Don’t Have Enough Faith to Be an Atheist
Next Triple Comfort for You and Those You Serve!